The 23rd annual Victoria Symphony Splash will light up the Inner Harbour Sunday, August 5, commemorating the city’s 150th anniversary, and the 2013 Ford World Men’s Curling Championship will be part of the celebrations. The marquee event of the summer season, drawing tens of thousands of people to the heart of the city, features the Victoria Symphony performing from a floating stage in the harbour.  The 2012 concert includes the return of the Inner Harbour Overture – created by renowned composer Tobin Stokes – with the live accompaniment of the cathedral bell, the carillon and the Coho Ferry horn. The festivities get underway at 1:00 pm with children’s activities, a wide selection of food from local vendors, live music acts… and it’s all capped off in the evening by a two-hour symphony concert and world-class fireworks display. 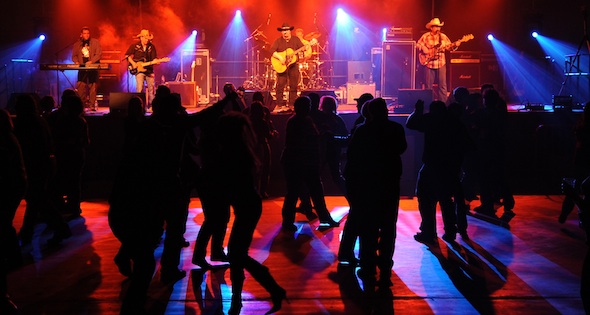 The championship also encompasses a festival of its own with the party that heats up in the Patch every day featuring an outstanding lineup of Canada’s top bands. (Photo Michael Burns)

Jack FM, media partner for the 2013 Ford World Men’s Curling Championship will be on the scene all day making sure everyone knows the best athletes in the game are coming to Victoria, March 30-April 7 in the Save-On-Foods Memorial Centre. The championship also encompasses a festival of its own with the party that heats up in the Patch every day featuring an outstanding lineup of Canada’s top bands. Local favourites, the Timebenders – widely recognized as the West Coast’s hottest show band – are veterans of the Season of Champions circuit across the country and likely to be headliners in the Ford World Men’s Patch. “Victoria absolutely adores the Timebenders,” commented Joanna Witham, Promotions Director with Jack FM.  “I’ve seen them so many times and believe me… these guys really know how to get the crowd rocking.” “You Gotta Be There” for the Ford World Men’s Curling Championship – the biggest sporting championship of the entire year and the best music festival of the winter season.  Get your seats now for all the entertainment by clicking here.