Scotties On Course for a Busy Fall

The curling season is drawing closer and that means volunteers for the 2013 Scotties Tournament of Hearts are picking up the pace to promote the Canadian Women’s Curling Championship’s first visit to Kingston. The Scotties team will be starting out the month September 7 at The Molly, a charity golf tournament sponsored by the Rotary Club of Kingston.  The event team will be on hand to distribute ticket information and contribute two Opening Weekend ticket packages to the women’s curling championship that will be open for bids in the silent auction. The Molly, a sister tournament to the Syl Apps Classic, was named in honour of the wife of the legendary Toronto Maple Leaf star.  It commemorates the tireless efforts of Molly Apps and all women who dedicate so much to organizations assisting women and children. On September 8 they’ll move to Portsmouth Olympic Harbour for the city’s Fall Recreation and Leisure Showcase with over 70 displays highlighting a variety of community services and programs. It’s back to school time at St. Lawrence College and the Scotties volunteers will take part in the open house September 12 to welcome new students and provide information on the 2013 Scottes which will be contested February 16-24 at Kingston’s K-Rock Centre. The first edition of the Scotties Volunteer Newsletter will be coming soon, with information on the Volunteer Rally scheduled for October. “It’s a busy start to the fall season for our volunteers,” notes Promotions Director Betty Bush.  “We are fortunate to have such an enthusiastic group ready to take on the challenge.” The Host Committee still has openings for banking and bar services personnel.  Prospective volunteers can register online by clicking here. “You Gotta Be There” for the 2013 Scotties Tournament Hearts when the top shooters on Canada’s curling circuit compete for the national title.  Get your tickets today by clicking here. 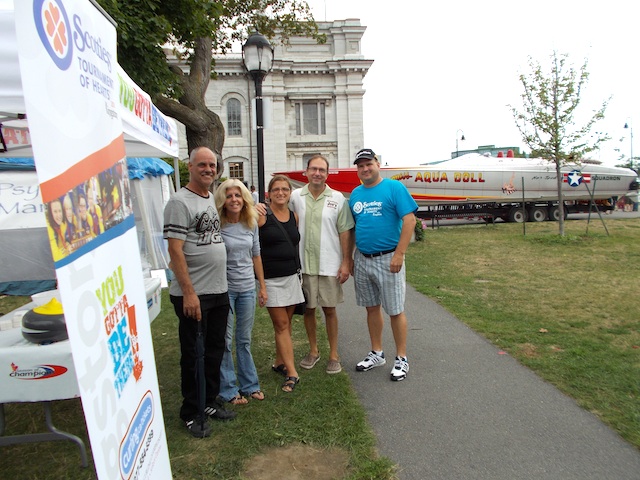