The curling world was saddened on Tuesday, September 4th to learn that 63-year-old Arleen Day of Regina passed away as a result of complications from lung cancer. Day, a former Saskatchewan women’s champion and a long-time curling umpire was first diagnosed with cancer in the spring of 2010. 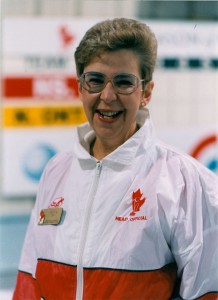 Arleen Day was a long time member of the CCA officiating committee and was instrumental in the development of the umpiring system that is used today by the World Curling Federation (WCF) and the CCA.

“Arleen will be remembered for the outstanding contribution she made as an umpire in Saskatchewan, Canada and the world,” said Canadian Curling Association (CCA) CEO Greg Stremlaw. “She was the dedicated kind of volunteer that simply doesn’t come along every day. Everyone at the CCA will miss Arleen, especially staff members and volunteers who worked with her over the years,” he continued. Day acquired her Level I officiating certificate in 1983 and by 1985 she had managed to acquire Level III status while directing a number of officiating courses at both the provincial and national level. Arleen also became involved with the administrative side of the sport serving as President of the Saskatchewan Ladies Curling Association and she was part of the group that worked on amalgamation of the Canadian Ladies Curling Association and the Canadian Curling Association in 1990. She was a long time member of the CCA officiating committee and was instrumental in the development of the umpiring system that is used today by the World Curling Federation (WCF) and the CCA. Day served as the alternate and head umpire for numerous national and international championships including the Scotties Tournament of Hearts, Tim Hortons Brier, World Financial Group Continental Cup, Capital One Canada Cup, Tim Hortons Roar of the Rings and the Ford Worlds. She had recently been an umpire for the WCF at the Winter Olympics in Vancouver. She was inducted into the Saskatchewan Sports Hall of Fame as a builder in recognition of her accomplishments as an administrator and umpire. She was a Level 5 umpire, the highest level in Canada and the world. Day’s last event as head umpire was the 2012 World Financial Group Continental Cup of Curling held in Langley, B.C. last January. She had been the head umpire of the Ryder Cup style world event since its inception in 2002 missing only the 2011 event because of illness. She was presented with the CCA Award of Achievement in 1997 and was an honorary life member of the Saskatchewan Curling Association.