Around the House: “Down time” at Guelph Curling Club

As the closing banquet for my Wednesday night league at the Guelph Curling Club wrapped up last spring, I remember looking at the pools of water covering the melting ice in the darkened ice house. The end of the season. Time for summer. But with unbelievable speed, the summer blasted by. Already the ice is in, membership reminders have been sent out, and the big sign out front is advertising free Learn To Curl sessions, starting this week. The new season is just around the corner. 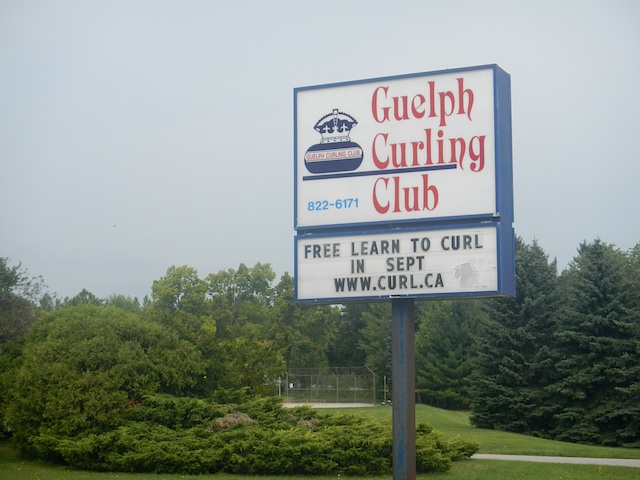 The Guelph Curling Club sits amid playing fields on the club's site at the northern edge of Guelph (Photo J. Mills)

So what happens at a typical curling club between the April closing banquet and September Learn-to-Curl sessions? A lot of cleaning, says Guelph Curling Club manager Kathy Brown, as we sit in the lounge chatting over the hum of a vacuum cleaner in action. “It’s down time,” says Brown about the first few months of the off-season. Carpets, floors, you name it – it’s an opportunity for a giant spring cleaning after the constant flow of curlers, spectators and visitors to all corners of the facility while regular leagues and winter rentals are in session. That cleaning extends to brightening up the walls, supports and walkways around the ice surface as well. The off-season is also a time to attend to necessary maintenance details, such as further work on leveling off the sand in the ice-house – a follow-up to last year’s header replacement. For Guelph CC’s ice makers Rick and Jennifer Hutchinson, there is no off-season or down-time. But the clubroom and kitchen/bar facilities weren’t exactly dormant during the summer months in Guelph either. Brown reports a steady flow of rentals for birthdays, anniversaries, weddings and other special events. A local adult slo-pitch league that uses the baseball diamond on the facility’s playing fields (all part of GCC land) used the club room as its registration headquarters, a perfect location with its access to a bar. And participants in the Southern Ontario Amazing Race headquartered at the club, using the land as a campground during their stopover in Guelph. But the business of curling continues, even if there’s no action on the ice. Like so many clubs, Guelph CC is looking at ways to best manage its property. Recently, the club has seen a forest of “big box” stores spring up in its back yard, and this summer saw the first conversations with local developers and the City of Guelph about possibly leasing parts of the property – now used as playing fields – for building. A sign beside the club says “Coming Soon!” but Brown smiles at that term: “coming soon” means “just beginning to look into”. Nothing is decided or firm, but at least the wheels are in motion. But what about on the ice? 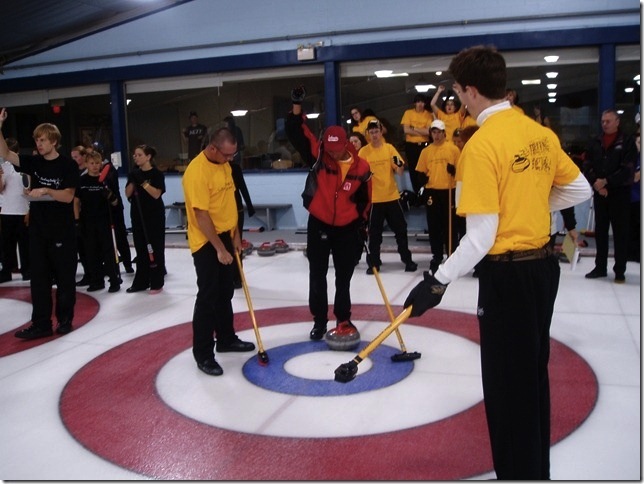 As we sat talking, I could see Rick going around the eight sheets of ice with his scraper. Above the glass behind each sheet, team names were posted, indicating the match-ups for upcoming games. Even though regular leagues haven’t started, the Summer League got underway in late August and will continue until the first week of October. In fact, curling has been underway in Guelph since the beginning of August. Yes, while the rest of Southern Ontario and much of the country was sweltering in the heat, Rick and Jennifer were working in an un-insulated ice house to make ice. Why? Because Guelph Curling Club is the home of the annual The Dominion Trillium Curling Camp for junior curlers, under the direction of CCA National Team Coach Jim Waite and his assistant Wendy Morgan. “Big kudos to the icemakers!” says Brown with feeling. It was a huge challenge to get the ice in and ready for the two weeks of junior curling as well as a three-day adult high-performance camp. No small feat in August’s hot and humid conditions. And now it’s September. The maintenance chores and camp-hosting duties are done. The Summer League is winding down, and a new season beckons with leagues starting a few weeks from now in early October. So, what’s the best way to kick off a new season? For Brown, it will be stepping on the ice for the first Learn To Curl session this evening. The curling season has begun again at the Guelph Curling Club. Does your club have an interesting story to share? People doing cool things? New developments in your club’s history? An anniversary to celebrate? Share your story by contacting Curling.ca editor Jean Mills at [email protected]