Penticton women really mean business when it comes to the 2013 World Financial Group Continental Cup of Curling, slated for the South Okanagan Events Centre January 10-13. The WFG Continental Cup volunteers were in the middle of all the action to promote the international curling classic Tuesday, September 11 at the monthly meeting of the Penticton Women in Business Luncheon at the Ramada Inn. An enthusiastic group of 73 local businesswomen proved to be in full support of championship curling’s return to the Okanagan Valley after Vernon’s experiences as host city for the 2008 Ford World Women’s Curling Championship. Active participants in the Penticton business community, the organization’s members clearly understand the value of the economic benefits that accompany the hosting rights for a major sporting event – along with the accompanying exposure to an international audience through media coverage. Two of the key women at media partner Sun FM – Red Hot Ash and Marianne McHale – have also been doing their part, sporting WFG Continental Cup t-shirts in the studio and during community appearances.  McHale’s morning show co-host Randy Farmer has also been outfitted in Continental Cup colours. The Sun FM team was on site at Skaha Lake September 7-9 for the 12th annual Raymond James Penticton Dragon Boat Festival produced by the GO Paddling and Rowing Association of Canada.  More than 90 teams, comprising nearly 2,700 people, participated in 78 races over the two-day festival. Women are even coming from out of province to promote the Continental Cup!  Heather Nedohin and her reigning Team Canada mates, who will be part of the North America side next January at the South Okanagan Events Centre, will appear at Cherry Lane Shopping Centre September 26 from 1:00 – 3:00 pm signing autographs and shooting Rocks and Rings with students from Wiltse Elementary School.  The Host Committee extends special thanks to principal Cathy Bowles for getting her students involved. “You Gotta Be There” for the 2013 World Financial Group Continental Cup of Curling.  Great seats are still available in the South Okanagan Events Centre – get yours now by clicking here. 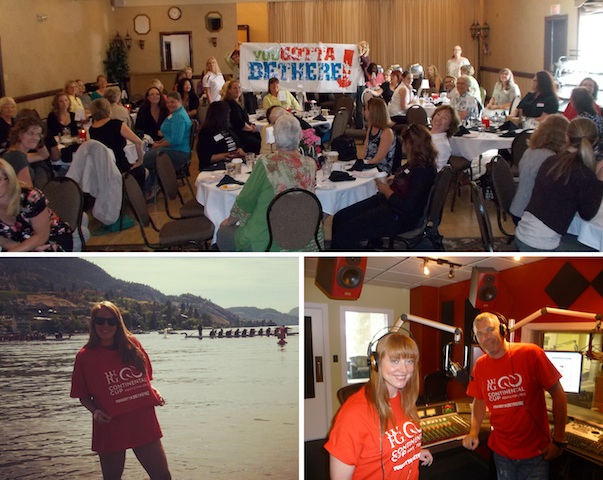 Top: Members of the Penticton Women in Business will be there. You gotta be there too! Bottom Left: Sun FM’s Red Hot Ash sports her Continental Cup t-shirt at the 2012 Penticton Women's Dragonboat Festival. Bottom Right: Hosts of SunFM’s Morning Show Randy Farmer & Marianne McHale show off their Continental Cup tshirts in the studio of Astral Media. (Photo courtesy AstralPWIB)