The volunteers for the 2013 Scotties Tournament of Hearts were on hand in Brockville September 13-16 for one of the first major events of the new curling season, making sure all the fans are aware the Canadian Women’s Curling Championship will be contested in Kingston this February. 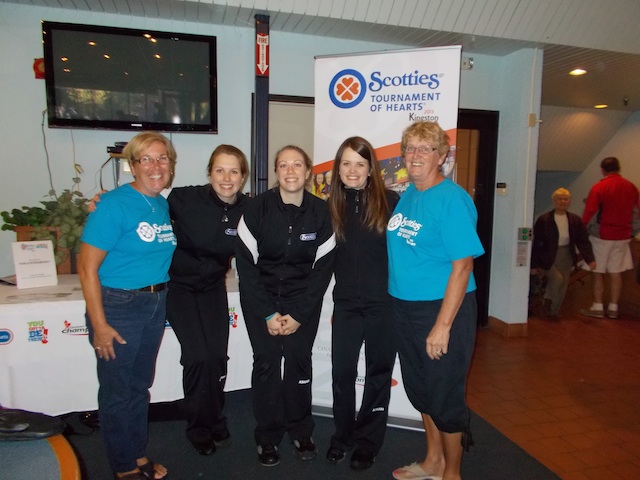 The Shorty Jenkins Classic at the Brockville Country Club attracted an elite field comprising a who’s who of the top shooters in international curling.  The men’s side included the likes of world champions Jeff Stoughton and Kevin Koe and 2006 Olympic gold medalist Brad Gushue. The top female stars were also well represented with four-time world junior champion Eve Muirhead making the trip from Scotland to join three teams who will be battling this season for the right to represent the home province at the Scotties – Sherry Middaugh, Rachel Homan and Tracy Horgan. Betty Bush, Director of the Paint the Town Committee for the 2013 Scotties, had a dedicated group of volunteers at the club for all four days of competition, meeting with fans and distributing event giveaways and ticket information. The Scotties team will be linking up again with Rock Solid Productions September 21 at the K-Rock Centre for the home opener of the Ontario Hockey League’s Kingston Frontenacs and on September 22 at the Cataraqui Town Centre. Visitors to the booth will have the opportunity to throw curling stones on Rock Solid’s 40-foot sheet of simulated ice.  Volunteers will be on hand to keep the momentum growing for the Scotties, coming to the K-Rock Centre, February 16-24. You’ll also find them at local curling clubs in the coming weeks, meeting with members during registration nights for the upcoming season. Volunteer positions are still available in the banking and bar services areas.  You can register online by clicking here. “You Gotta Be There” when the Scotties Tournament of Hearts makes its first trip to Kingston.  Excellent seats are on sale now – get yours today by clicking here.