It was a landmark day for a large and enthusiastic crowd when the first Volunteer Rally for the 2013 Ford World Men’s Curling Championship was hosted September 23 at Saanich Commonwealth Place. More than 450 volunteers – all investing their personal time and energy to the challenge of making the event even more successful than 2005 when the Ford World Men’s last came to Victoria – packed the house to officially kick off the championship drive. 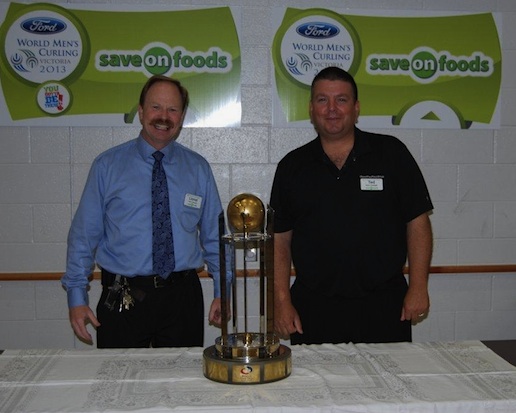 Keith Dagg and Chris Atchison, Co-Chairs for the Ford World Men’s, were front-and-centre to address the volunteers, expressing their pride in leading such a passionate, dedicated and hard-working group. “We sincerely appreciate everything all these folks will be doing over the coming months, and what many have already done during the initial promotions,” says Atchison.  “It’s amazing how this community comes together to make sure Victoria shines bright in the national spotlight.” The rally saw the volunteers go through fittings for official uniforms, accreditation photos and receive marching orders from their respective directors.  They also had the opportunity to meet Vice-Chairs Quenton Lehman, Jay Tuson and Todd Troyer and Event Manager Neil Houston who threw second stones for the Ed Lukowich team that won the world men’s curling championship in 1986. “We are very excited to be a part of this great event,” said Lori Morley, representing volunteer sponsor Save on Foods Canada, “and from speaking with the volunteers you can tell they are truly the lifeblood of the 2013 Ford World Men’s Curling Championship.” The Save on Foods contingent for the rally also included Ted Pigoen and Lionel Gjerde, managers of two of the company’s Victoria stores. Now that all the volunteers have been through the briefing procedures, a number of them will be on the job in very short order for open house events at Greater Victoria curling clubs.  The first three on the schedule are the Victoria Curling Centre, Juan de Fuca Curling Club and Esquimalt Curling Club on Sunday, September 30… and you can be sure the Ford World Men’s promotions booth will be there for every one! “You Gotta Be There” when the top shooters in the roaring game come to the Save-On-Foods Memorial Centre for the 2013 Ford World Men’s Curling Championship. Make sure you reserve your seat now by clicking here.