The winner of this year’s national women’s curling crown will be decided February 16-24 when the 2013 Scotties Tournament of Hearts hits the ice at Kingston’s K-Rock Centre.  And the Scotties volunteers were in the complex this past weekend to promote the event. The volunteer team joined Rock Solid Productions September 21st when the Ontario Hockey League’s Kingston Frontenacs faced off against the Oshawa Generals in the home squad’s season-opener. Rock Solid set up their 40-foot sheet of simulated ice so hockey fans could experience a taste of curling… and the Scotties volunteers were there to make sure everyone knows one of the most exciting championships in the game is heading to the city in just five months time. The Rock Solid rink, with the Scotties crew close at hand, was back in play the next day at the Cataraqui Town Centre to recruit participants for CBC Sports Day coming up September 29.  The Royal Kingston Curling Club will be one of the focal points of the national celebration, designed to promote the power of sport in building healthy lifestyles. The Curling Club Promotions Committee, headed by director Scott Buckley, is gearing up for a drive to hit all the clubs in the city as they prepare for the start of the new season.  Over the next several weeks his charges will be attending registration nights at the Royal Kingston, Cataraqui, Gananoque, Garrison and Napanee clubs. Along with the task of generating enthusiasm for the Canadian Women’s Curling Championship, Buckley will also be at work to sign up volunteers for banking and bar services when the Scotties hits town in February.  If you’d like to get involved in one of our country’s major sports championships, register online by clicking here. “You Gotta Be There” for the 2013 Scotties Tournament of Hearts at the K-Rock Centre in the heart of Kingston’s historic downtown district.  Get the best seats in the house early just by clicking here. 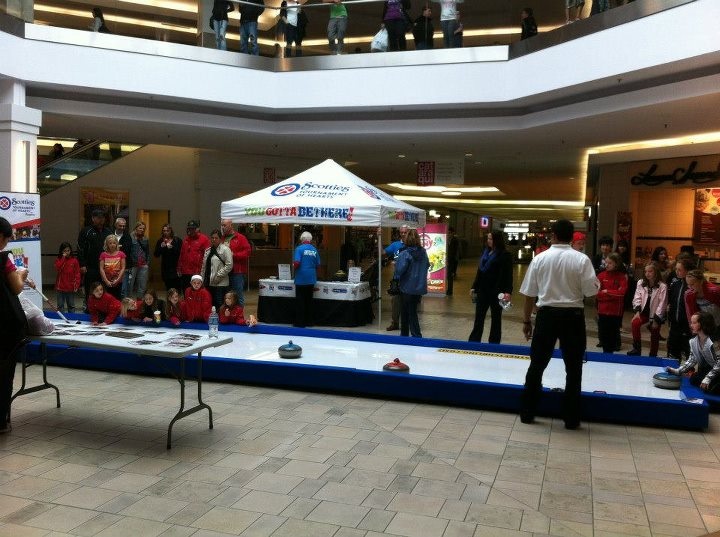 Rock Solid Productions Inc. set up at the Cataraqui Centre to give spectators a chance to throw some rocks on simulated ice (Photo Abbie Darnley)