Curling a Big Part of Sports Day in Kingston

The Scotties volunteer team was in the middle of all the action September 29 for CBC Sports Day at the Royal Kingston Curling Club. The event provided a unique opportunity for novice curlers to take a shot at the game in a one-hour learn-to-curl instruction session.  The Scotties promotions team was there, alongside the five local curling clubs and Rock Solid Productions, to hand out information on the 2013 Scotties Tournament of Hearts taking place February 16-24 at Kingston’s K-Rock Centre. “It was a natural fit for our volunteers,” comments Promotions Director Betty Bush.  “So many of these people have become enthusiasts of the game through watching championship curling on television… this was a perfect chance for them experience it first-hand.” The Royal Kingston is the first rink to get out on the ice but the other clubs will be joining them soon for the start of the new season. The Curling Club Promotions crew will be making visits to the Garrison and Cataraqui curling clubs during the week of October 1st. With the first Volunteer Rally scheduled for October 21 time is running out for volunteer registration.  If you’d like to play a role in one of Canada’s major sporting events, sign up online by clicking here. “You Gotta Be There” when the best women’s teams in the country compete for the national title this February at the 2013 Scotties Tournament of Hearts.  Prime seats in the K-Rock Centre are available now by clicking here. 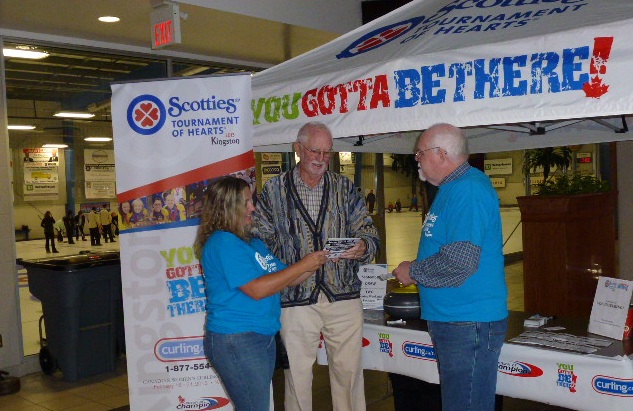