This January, Canadian curlers coast to coast will compete in a championship that brings Scottish teams across the Atlantic to battle – in friendly fashion – for curling supremacy. Plans are underway for the  Strathcona Cup Tour 2013. It’s a tradition that started in 1902, when a resolution passed at the Annual General Meeting of the Royal Caledonia Curling Club supported sending 25 Scottish curlers to Canada for a friendly competition. The tour was such a success that the Canadians made a return visit in 1909, and the ongoing battle for the Strathcona Cup began. For the 2013 tour, the wheels are already in motion. “The Scots have selected the 60 curlers who will be coming to Canada,” reports Hugh McCarrel, Canadian Chairman of the 2013 Strathcona Cup Tour. “They have been split into three tours of 20 and we received their CVs earlier this week.  Bill Duncan, President of the RCCC, will be touring with the Scots and will be splitting his time equally among the tours.” The Scots arrive on January 9th and will attend opening banquets in Halifax, Ottawa, and Vancouver, representing the three tours – East, Central and West. “For the first time, all ten provinces are included in the tour,” says McCarrel.  “The East tour after leaving Halifax, will head to St. John’s, Newfoundland, for their first-ever visit.” The 2013 tour will wrap up with a closing banquet at the Burlington Golf and Country Club on January 31st. The Strathcona Cup champion is determined based on the cumulative results of all the games played, in this case, 434 games in over 100 Clubs.  McCarrel reports that over 1,700 Canadians will participate as opposition and hosts for the Scots. The colourful history of the competition can be found on the Scots’ Strathcona Cup 2013 Tour website, including details of earlier Tours, and quotations from documents used in reporting on the competition. Here’s a sample: on learning that the Canadian curlers had accepted an invitation to travel to Scotland for the first time, the minutes of the 1908 Annual General Meeting reflected the tone of the competition: “[There was] unmingled delight as there was a general expectation that the visit of the Canadians to Scotland like that of the Scots to Canada would not only still further strengthen the bond of friendship between those who are kinsmen but…would handsomely avenge any defeat sustained by the Scots in their visit to Canada, which by some strange system of perversion had been very much exaggerated!” Updates on this unique competition will continue as plans for the Strathcona Cup Tour 2013 get underway. 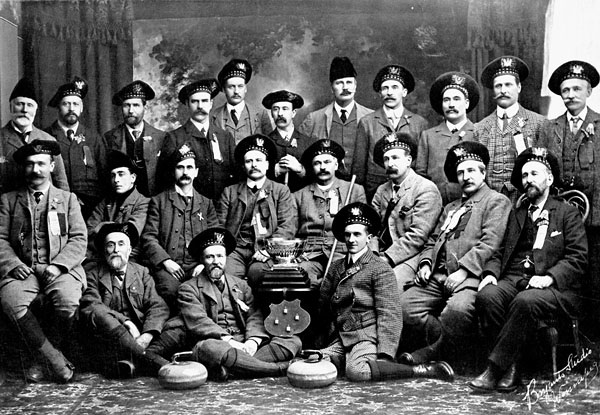 Scottish curlers pose in Winnipeg for an official photograph during their 1903 tour (Photo Howard H. Ward / Library and Archives Canada)