Around the House: Celebrating Fifty Years of Curling at Annandale

Since April, members of the Annandale Curling Club in Ajax, Ontario, have been at work preparing for the 2012-2013 season. Yes, there will be curling. But more importantly, there will also be lots of celebrating: Annandale is entering its fiftieth year. It’s time for a season-long party! 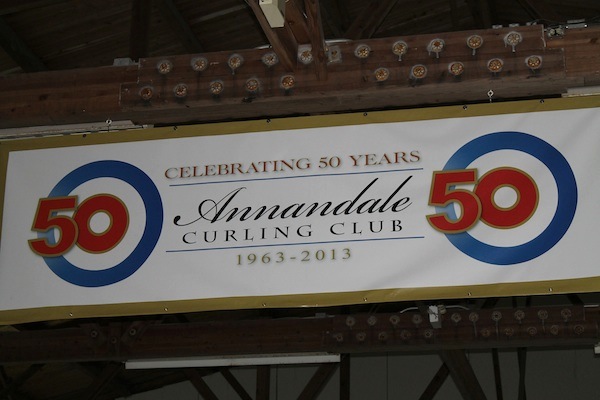 “We started getting together last April to get things moving, brainstorming and seeking sponsorships so we could run it smoothly,” says Anniversary Committee Chair, Lynda Pellow, who has been working with fellow club members Arlene Joly, Dave Hutchison, Wendy Retz, Dale Patterson and Liane Maki to organize the season-long celebration. That meant fundraising in and outside the club, running special events, and courting local corporate sponsorships. They also reached out to past members, provincial championship winners, and presidents, among others, with an invitation to the September 15th Kick Off Celebration Party. Congratulations were received from high-profile visiting dignitaries such as Chris Alexander MP, Joe Dickson MPP and Doug Dickerson, Deputy Mayor of Pickering. “Joan O’Leary the President of OCA and also a member of our club gave words of welcome and congratulations,” says Pellow. “We were lucky enough to have 25 of the 35 still-living past Presidents there and many of the banner winners were in attendance as well.” The celebration took place out on the ice – pre-installation, of course – and included 300 past and present members enjoying food, a martini bar and live entertainment. 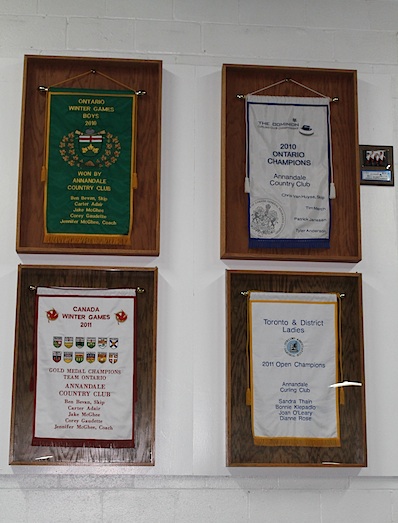 Annandale CC is known for its active and successful junior curling programs, so of course, younger curlers are included in the anniversary plans. “On October 28th we are having a Little Rock 50th party, asking the members to bring a friend,” says Pellow. “We will have a fun spiel with silly rules, and then have the Highland Heavy fun games with team events off the ice. We are bringing in a popcorn machine and candy floss and will have prizes as well and a nice lunch for our younger members.” The Bantam/Junior curlers will have their day on December 9 with interesting twists including a couple of “no talking” ends which, as Pellow points out, “should be a challenge” for the teenagers. Events taking place in the New Year include hosting the Provincial Senior Men’s and Women’s Curling Championships, which will run from February 20 to 24. But before that takes place, Annandale plans to salute their 50 years with – appropriately – a 50-End Bonspiel on January 19. Sixteen, 12-person teams will start curling at 7:30 a.m. and complete five, 10-end games on the ice, and take part in lots of activities off it. “We hope to be finished around 11 p.m.,” says Pellow. “During the day we are holding an Annandale Has Talent Contest to entertain everyone, and in the evening we will have the band Just Us to help us rock the night away.” And in true curling community fashion, the benefits will extend beyond the club. “It will be a modest cash spiel, with any monies remaining going to The Sandra Schmirler Foundation,” explains Pellow. Annandale is a club with its own unique stories, personalities and a slew of championship banners on the walls, having won a total of eight Ontario Curling Association Provincials titles in its fifty-year history. Annandale teams also won at the Ontario and Canada Winter Games, competed at The Dominion Curling Club Championship (losing on a pick in the last end!), and even went to the 1979 Brier. “Donald Annan is the man responsible for building Annandale,” explains Pellow. “Unfortunately, he passed away in 2008, but his wife came to our Kick Off Celebration and we made a special dedication to him with a bit of his history in the Ajax/Pickering area.  Dale Patterson, who researched all of the past history of the club, thought it would be a good idea to have an annual Volunteerism Award in Donald Annan’s name.  We presented the plaque at the party and it was well received. It will be presented to a volunteer each year at our Club Closing Banquet.” Fifty years of curling and a well-planned, exciting season of celebration ahead: what’s the secret, Annandale? “We have a large group of volunteers who make us special,” says Pellow. “We must be doing something right to have been here for 50 years!” 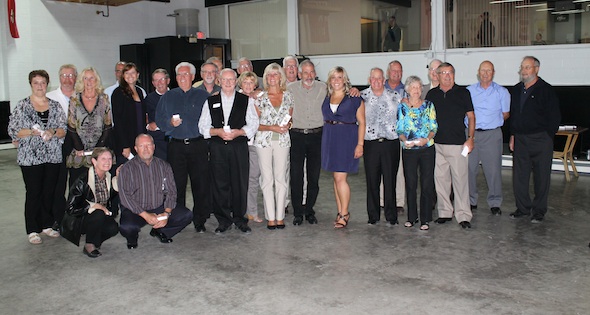