Around the House: Home to the Wadena Curling Club

Boy grows up in a small Saskatchewan town and, of course, learns to curl at the local rink. Boy moves to big city, where he completes university, lands a job as an ice tech and, eventually, becomes a curling club general manager. Boy, all grown up now, moves back home to raise his young family. Where does he head? Straight to the local curling club, of course. “My first memory of curling was my dad teaching me the turns behind the hack before the Legion Bonspiel in Wadena’s old wooden barn-shaped curling rink,” says Scott Comfort, ice tech at the four-sheet curling club in Wadena, Saskatchewan. “I don’t think we won, but I remember getting a trophy.” He was hooked. Comfort remembers “growing up at the rink watching my parents curl and waiting for my turn after the adults were done.” And off the ice, it was all about volunteering at events, working in the kitchen, or even helping to build a new rink. So after a curling-rich period in Regina, on the ice crew at the Callie Club and later as general manager at the Tartan, it’s no surprise that once Comfort got settled back home in Wadena, he was straight off to the local club where he took the job of ice technician. “The position gave me my curling fix and allowed me to give back to the club that started my great life of curling,” says Comfort, who also holds down a job as a real estate agent. 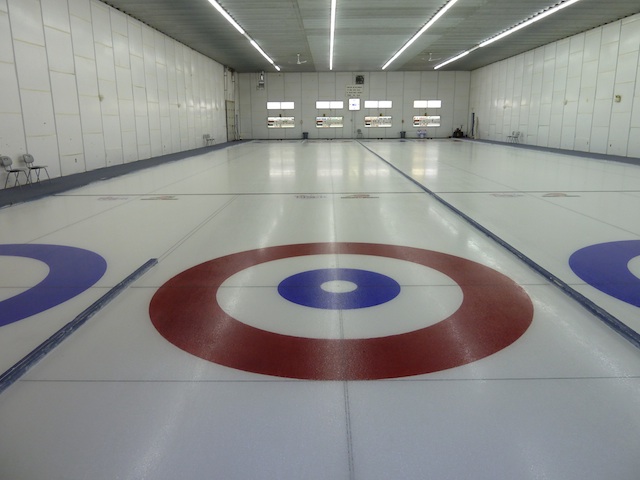 The ice is ready for action at the Wadena Curling Club (Photo S. Comfort)

‘Giving back’ can mean a lot of different things. For Comfort, it meant revving up an event that had been a mainstay of his early years at the club, the Chicken and Wine Bonspiel. “The Chicken and Wine…used to bring everyone back to their hometown for at least a weekend,” he explains. “The event was more known for its social aspect than the curling, which attracted many non-members.  In its later years the event turned into a family spiel that started Saturday at noon and was done early Sunday.” In a small town, an event like this can turn the curling club into the social hub of the community for the non-curlers, as well as provide a fun but reasonably competitive event for all the curlers. That was Comfort’s goal. “When I moved back home, resurrecting the Chicken and Wine event was my personal mission. With a few minor tweaks, including the use of social media to contact ex-Wadena residents, the event went off with great success. It attracted many non-members and the lounge revenues for that weekend reached over 20 per cent of the revenues for the entire previous season.” “I attribute the success of the event to promoting it as a social event first with curling as the setting,” says Comfort about his approach. “We went to six ends, ended the event on Saturday to avoid the dreaded Sunday morning draw, and stressed to all non-curlers that curling ability was irrelevant.” He also did something different with the prize money. “[We used] all the prize money to pay for a live band, Celtica, who is a Celtic rock band complete with BAGPIPES! The curlers were very surprised and pleased with the decision since they were in the event to have fun, not to win a toaster.” Comfort says one of the non-curlers, who was there for his one curling event of the year, told him that a Celtic band with bagpipes in the lounge made them feel like a “real curler”.  As teams left, they were already signing up for next year’s event, and there were requests for “less curling and more socializing.” “The success of the event is not only to have a good idea. You need support from the community, especially in a small town.” And although the “new” way of running the spiel took some getting used to, the event’s success convinced everyone that change can be good.

Young fans offer support at Wadena’s Chicken and Wine bonspiel with a sign that says: “Dad, you’re better off in The Patch!” (Photo S. Comfort)

Comfort, who is preparing to make a run for the Saskatchewan men’s provincial curling title this season, knows one thing that won’t ever change. “Curling is a huge part of my life and always has been,” he says. “I have made many great friendships, and have met many high profile curlers and builders in the sport through curling, my career, and volunteering.” Ever heard of Glow-in-the-Dark curling? In a future Curling.ca story, we’ll share some of Scott’s suggestions for the “business of curling.”