Sigfridsson Slides Out of the Shadows of a Legend

In the past two decades of women’s curling, Anette Norberg has unquestionably been the biggest name in the Swedish game with a pair of Olympic gold medals and three world championship victories to her credit. 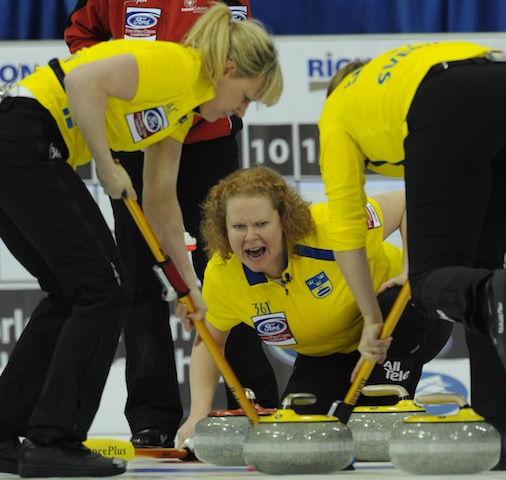 But her bid for a twelfth appearance at the world championships ended last year at the hands of the Margaretha Sigfridsson team in the final of Sweden’s women’s curling playdowns. The win moved Sigfridsson on to represent the country at the 2012 Ford World Women’s Curling Championship in Lethbridge where she won silver after a dramatic lost-rock defeat to Switzerland’s Mirjam Ott in the gold medal game. In four shots at the world championship she has won silver three times to accompany a gold and silver medal in the European Curling Championships. Last season’s success earned Sigfridsson, Maria Prytz, Christiina Bertrup and Maria Wennerstrom a coveted spot on the Team World roster for the 2013 World Financial Group Continental Cup of Curling, January 10-13 in Penticton. The World side will take on Team North America in the ninth edition of the event, showcasing the brightest stars in the sport, with the series tied up at four wins apiece. “You Gotta Be There” for the 2013 World Financial Group Continental Cup of Curling in the South Okanagan Events Centre.  The best seats in the house for one of the most prestigious championships of the year are available by clicking here.