Around the House: Community Funspiel Kicks Off Season in North Bay, Ontario

For regular curlers, the season often kicks off with a club bonspiel to get everyone back on the ice and ready for action.  At North Bay Granite, in North Bay, Ontario, an October funspiel brings the local community together for a whole week of curling activities and ensures anyone with an urge to start curling has a positive first exposure to the sport. “The Community Funspiel attracted 22 teams this year,” reports Granite Club manager Bobby Ray. “Almost all of the teams were completely new and were representing local businesses.” The spiel is set up with two draws: Monday-Wednesday-Friday, or Tuesday-Thursday-Saturday. Naturally, it doesn’t matter which draw a team belongs to; there’s action on and off the ice each night. 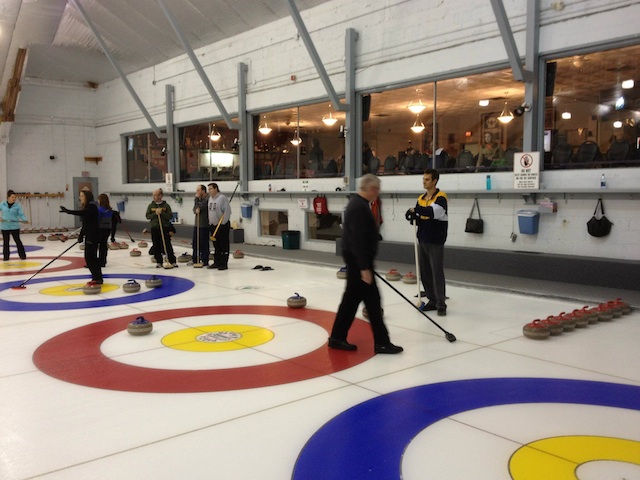 “Joey’s Only Seafood supplied the food,” says Ray, “while entertainment was hugely successful thanks to a couple of local bands.” In an unusual twist, the prizes are provided not by the organizers, but by the teams themselves. Each team is asked to donate an item of $20 value to the prize table, and because many of the participants are from local businesses, the prizes often reflect their donor. Like any spiel, there are those memorable moments, some of them unique. Minnow racing, anyone? “The highlights include Minnow Races which were facilitated by one our members who is often our Master of Ceremonies,” explains Ray. “Dave Bennett has a knack for public speaking and he gets everyone into the spirit of minnow racing with names for the racers, tournament draws and suiting music for the event. “ Other local talent supplies the entertainment to keep the party room hopping into the night. “Our Friday entertainment was wonderful with Annie Sumi opening for Duke Marvelous. Annie is a local university student with a powerful voice. Duke Marvelous is always a riot and combines great tunes with humorous performances for the ultimate entertainment package that kept many around until late in the morning.” So the North Bay Granite’s Community Funspiel was clearly a great way to kick off the season. But as Ray points out, the event does more than keep the local curlers happy. It also entices new curlers to the Granite Club and shows just what the sport has to offer. “The Community Funspiel works exceptionally well for exposure, as the local media is involved and many community members come through the doors whether curling or spectating,” says Ray.  And even if the event doesn’t mean every participant signs up to join the club, the results are still positive. “[The Community Funspiel] is where we direct the people that have already expressed an interest in joining. I find the event locks in those prospective members that are on the fence as they are shown a really good time.” The hardworking Granite Club board and volunteers are already thinking about making some changes next year, possibly adding junior and senior categories during the day. As for this year, Ray reports that the announcement of the winning team captured the spirit of the come-and-have-a-good-time event. “Draw Master Mark Brown announced that the winner of the spiel was ‘Who cares!’” says Ray, “which was to everyone’s delight, and was representative of the event’s nature.” 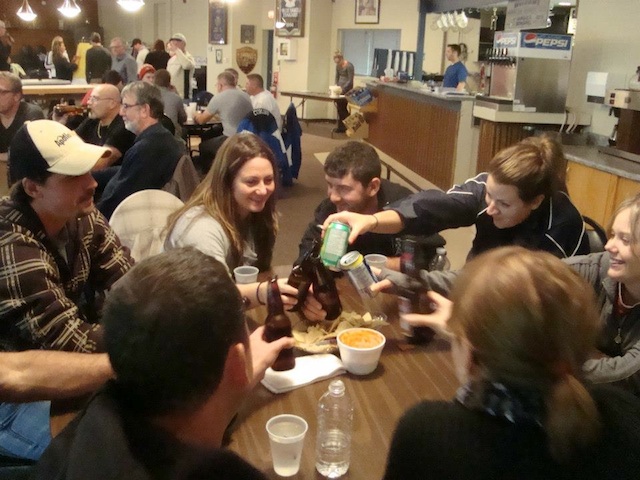