Around the House: Archival Photos and Vintage Curling Gear in Vancouver

Centennial celebrations continue at the Vancouver Curling Club, and the season has already been busy with bonspiels and banquets. Among the highlights was a special photo shoot: VCC members assembled on the ice in an effort to recreate a 1949 image from the club’s archives. According to VCC’s current president Scott Allen, stage-managing the shot went smoothly. “A few minutes before the photo was taken, we marshalled everyone into the main lobby of the Hillcrest Centre (where the VCC is located).   A piper then led our group through the facility and into the VCC; there were a lot of pictures and phone photos taken by the general public, as you don’t see a piper in a community centre very often,” says Allen. The idea for a photographic homage was dreamed up during the club’s move from its previous home on Dinmont Street to the current facility at the Hillcrest Centre last season. Instead of staging it as a “Last Rock” image, members decided to include it in the 100th Anniversary celebrations instead.

The photograph session was just one of the activities planned during the Anniversary year. In mid-October, current and past members gathered for a Gala Banquet – complete with “honourary life members, past presidents, provincial purple heart winners, our local MP, friends of the Club and members past and present, including Honourary Life Member Phyllis Carpenter, who recently celebrated her own 100th birthday,” explains Allen. 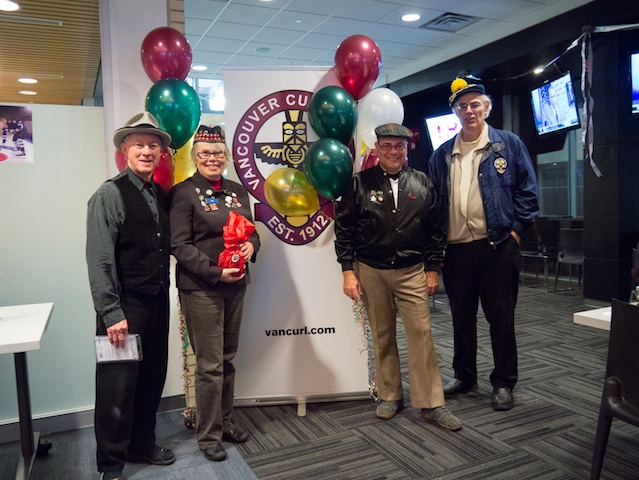 And of course there was curling, too! The “Celebrate the Decades Funspiel” drew curlers aged 17 to 83, many of them decked out in vintage curling attire. Four-end games throughout the day ended with prizes for categories such as best period costume and best hat. Using a mix-and-match format, every curler was shuffled throughout teams positions, with a prize awarded to the curler who accumulated the most points at each position. “It was great to see our senior members playing with juniors, fathers and sons playing with and against each other, and friends and new acquaintances alike all making a true celebration of the decades.” One hundred years of curling together is something worth celebrating, but commemorations like the VCC’s don’t happen by magic. Allen notes the contribution made by many club members and volunteers, as well as “an extraordinary amount of work” from two past presidents, Kathy McInnes and Jen Lucas. “It is important to take a moment and reflect when a once-in-a-lifetime celebration such as 100th anniversary comes along,” says Allen, who is also an Honourary Life Member. “Whether its our members who continue to curl with us after 50 years or our members in their second year who felt it was important to take part in the 100th Anniversary Celebrations, it is enjoyable to see our 1,200 members take an interest in the Club’s history.” 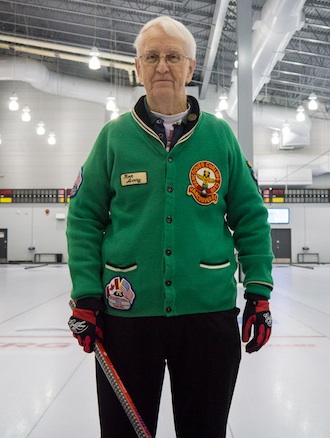 The Vancouver Curling Club means something a little different to everyone who is here tonight and the thousands upon thousands who has walked through the front doors of the four facilities we have called home over the past 100 years.  The Club has proven itself to be an integral part of the city’s social fabric and been a home to many different curlers.  From our purple heart winners and member teams that played in the old totem spiel to the raucous members that used to turn the lounge on Dinmont Avenue into a piano bar to our former members who were actually shareholders in the Club and our new curlers who joined us this season, the Vancouver Curling Club is a proud reflection of our city.

We are inclusive, we are diverse, we are welcoming, we are a great place for social gatherings, we have helped build friendships and long-term partnerships, we have forged community relationships, and we have fostered a love to the roaring game.  Here’s to the women and men – a number of them who are with us this evening – who have worked tirelessly over the years and worked a vast majority of it as volunteer commitments to shaping this institution.

It is the people who make a community and who have shaped our Club.  Many of you of here have so many of your own stories to share of events and moments that have happened at the Vancouver Curling Club.  Some of them happy, some sad, many humourous and all of them revolving around the roaring game and lively lounge.  Thank you to our members and guests for everything you have contributed over the past 100 years and thank you, in advance, for all that will be given over the next 100 years.

Here’s to the Vancouver Curling Club! 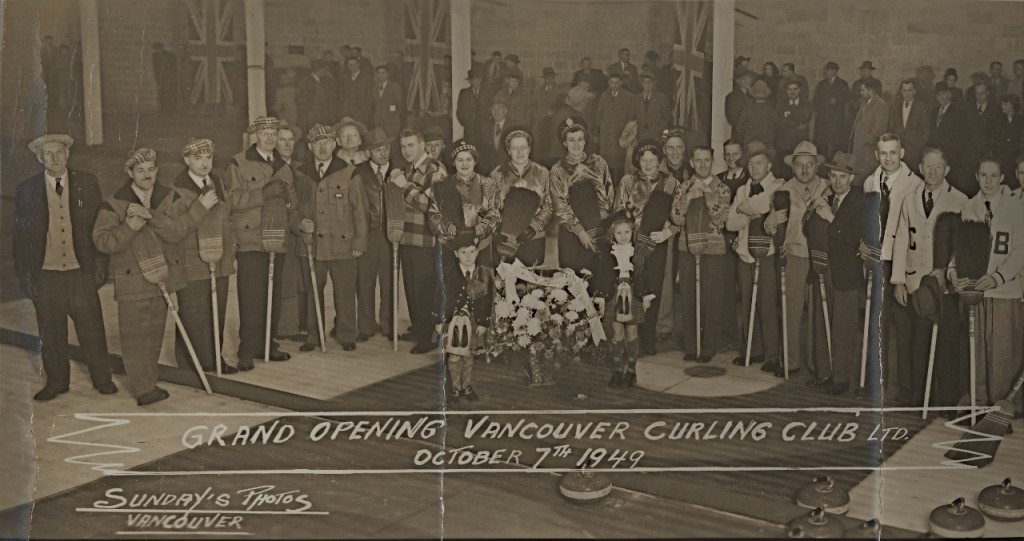