Ontario and Alberta are the winners of the 2012 The Dominion Curling Club Championship. In Finals action today at the Scarboro Golf and Country Club, Ontario’s Caroline Deans and her team of Sheri-Lynn Collyer (Third), Kendra Lafleur (Second), Lynne Stapley (Lead) won the Women’s title and Alberta’s Dan Sherrard (Skip), Brandon Klassen (Third), Kyle Reynolds (Second) and Todd Kaasten won the Men’s. Women’s Final – Ontario vs Quebec Quebec’s Sonia Simard, with her team of Josée Bédard (Third), Josée St-Amant (Second), Guylaine Sauvageau (Lead) who play at the Amos Curling Club, had a strong week, going 5-1 in the round robin. Ontario was undefeated coming into the finals, and started the game with hammer. The teams exchanged singles for the first four ends, until Ontario was able to score a 3 points in the fifth, for a 5-2 lead. Holding Quebec to a single in the sixth, Ontario put another 3 points on the scoreboard in the seventh when Deans played a delicate tap-back to take the end. In the eighth, Ontario ran Quebec out of rocks for an 8-3 victory and the championship. 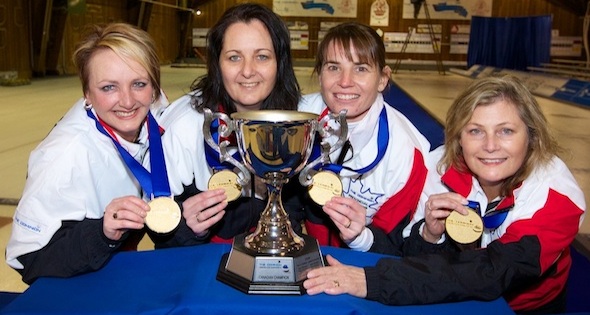 Men’s Final – Manitoba vs Alberta Manitoba’s Steven Irwin, Justin Rabe, Travis Brooks and Cody Rabe of the Brandon Curling Club went through the round-robin undefeated, while Alberta’s Dan Sherrard, Brandon Klassen, Kyle Reynolds and Todd Kaasten finished up with a 5-1 record. A close game was expected and that’s what these two teams delivered – right to the final rock of the game. Manitoba opened with a deuce and allowed Alberta only a single in the second, then roared back with a 3 in the third end. But Alberta answered with its own 3 in the fourth, then stole a single in the fifth to tie the game at 5-5. After exchanging singles, the teams were tied 6-6 heading to the eighth, and a missed hit by Irwin left Alberta counting 1 – a stolen point that broke the tie and gave Alberta’s Sherrard, Klassen, Reynolds and Kaasten a 7-6 victory and the 2012 The Dominion Curling Club Championship Men’s title. 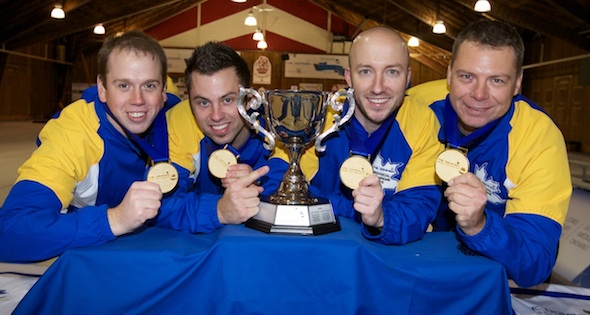 On top of taking home the national titles, teams competing in the 2012 finals will also be showcased on TSN. The sport broadcaster was on site for the action, filming the final games for an upcoming special documenting the flavour of the event, offering a snapshot into a curler’s journey to the Championship.  The one-hour special will air December 2nd, 2012 on TSN2. The Championship also provided winners off the ice – a record-breaking $65,000 was raised for Spinal Cord Injury Ontario (formerly the Canadian Paraplegic Association). All profits from The Dominion Curling Club Championship are re-directed to Spinal Cord Injury Ontario and developmental curling initiatives in communities across the country. The Dominion Curling Club Championship is a one-of-a-kind national Championship for club curlers, hosted annually in provinces across Canada. Men’s and women’s teams from each of Canada’s provinces and territories come to play each year in round robin competition, all vying for the honour of being named The Dominion Canadian Curling Club Champions.