The standings are beginning to take shape after Draw 3 of the 2012 Capital One Canada Cup, with four teams – Jones, Lawton, Stoughton and McEwen – remaining undefeated, and four – Howard, Gushue, Carey and Overton-Clapham – still looking for their first win. In the women’s draw, defending Canada Cup champions Team Jones, with Kaitlyn Lawes on skipping duties, controlled play throughout a 9-6 victory over Cathy Overton-Clapham. 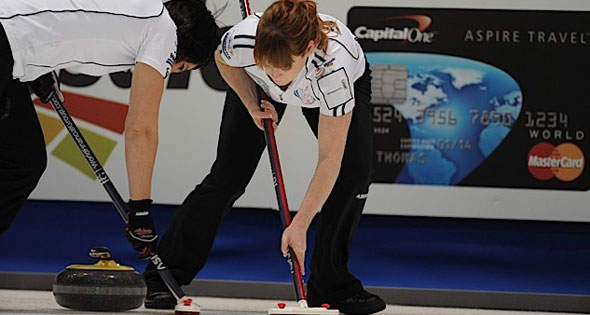 The game was close until the fifth, when Lawes scored 4 points, taking a 7-3 lead into the fifth-end break. But Overton-Clapham refused to go away, scoring a single and stealing another in the eighth. Lawes was unruffled, using hammer to take a single in the tenth for the 9-6 victory. “It’s a good first day for us,” said Lawes after the game. “We’re still learning what the ice is doing and we’re trying to manage it as best we can.” Relying on the experience of front end Jill Officer and Dawn Askin has made the skipping duties easier, says Lawes. “They make my job easier and I can draw on their experience.” Substitute third Kirsten Wall has also made a contribution to this team, who is playing without regular skip Jennifer Jones. “She’s such a calming influence,” says Lawes about Wall. “She’s super knowledgeable, and she pumps me up and makes me feel I can throw anything.” Like Lawes, Jeff Stoughton takes a 2-0 record into day two after defeating Glenn Howard and Kevin Koe. “A great first day. We couldn’t ask for anything better than two wins against a couple of great teams. We’ve got to play our best and see if we can get another win,” said Stoughton after stealing a single in the tenth for a 7-5 final over Koe. The other undefeated team, Mike McEwen, relied on its arsenal of big-weight take-outs to defeat Glenn Howard, 7-6. Despite getting close with a deuce in nine and a steal of 1 in ten, Howard wasn’t able to generate enough offense and remains at 0-2 after the first day of play. Heather Nedohin and Chelsea Carey also came into Draw 2 looking for their first win. In an aggressive first end, Nedohin scored 2 and continued to keep the pressure on throughout the game. “That’s typical of Team Nedohin,” said the skip when asked about the team’s intensity in the evening draw. “We always play with a lot of intensity. We were scrapping to get back in our game this morning, and this one we were leading till the later ends.” A missed draw by Carey in five put Nedohin ahead 7-1 going into the break. With the score 8-5 in the ninth, Nedohin played the peel game, removing centre guards with precise throws from second Jessica Mair and third Beth Iskiw. But a roll-out on last rock allowed Carey to steal 2, narrowing the score to 8-7. Nedohin’s final draw put the game away. [flickr-gallery mode=”tag” tags=”2012cancupd3″ tag_mode=”all”]
After three draws, McEwen and Stoughton sit undefeated at the top of the men’s draw, with Koe, Epping and Martin sitting at 1-1, and Howard and Gushue still looking for their first win. Jones and Lawton remain the only undefeated teams on the women’s side, with Middaugh, Nedohin and Webster at 1-1, and Carey and Overton-Clapham still looking for a win.
On Thursday morning, the men’s draw will see Epping vs McEwen, Carey vs Lawton, Nedohin vs Middaugh, Overton-Clapham vs Webster and Koe vs Gushue. httpvh://www.youtube.com/watch?v=FmXaBea0bQs