Chelsea Carey and her team of Kristy McDonald, Kristen Foster and Lindsay Titheridge are feeling a little less pressure tonight after notching their first win of the 2012 Capital One Canada Cup, a 7-4 victory over Cathy Overton-Clapham. A relieved Carey was smiling after the game. 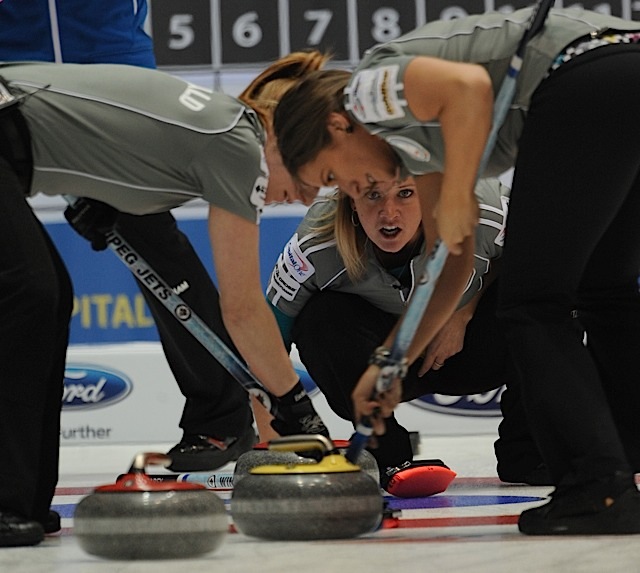 “It’s tough. You’re just staring at the goose egg on the standings board and it’s a little terrifying so it’s a monkey off our backs,” said Carey, who made it to the 2011 Capital One Canada Cup final, losing to Jennifer Jones. “Obviously we have a couple of games to play and every game’s worth a lot here. Last year 3-3 got into the playoffs without a tiebreaker, so we’re not dead yet. It feels good to get that one off our backs.” Both teams struggled with the ice, missing opportunities to apply pressure. In the fourth end, Carey accidently picked out her own rock, leaving Overton-Clapham an open draw for two. But Carey came back with a deuce of her own to take a 4-3 lead after five ends. “The ice was a little tricky tonight, so it was ‘stay patient’. I flashed a wide-open hit that I thought I threw okay in the fourth end. It’s going to happen both ways, so we just had to really stay patient and not let misses bother you. Everyone was going to miss shots with it being a little trickier tonight. We did a good job at that.” In the other game in the women’s draw, Heather Nedohin dominated Team Jones, skipped by Kaitlyn Lawes. Nedohin kept the pressure on through the early ends and led 5-2 at the break. Lawes had a chance for multiple points in the sixth when a Beth Iskiw take-out attempt removed all Nedohin’s yellow rocks and left six red rocks in the house, but Nedohin drew against 4 for the single. On the men’s side, Glenn Howard controlled his game against Kevin Koe right from the start, showing the familiar dominant form by scoring 3 in the second end and keeping the pressure on throughout. “It’s such a tough field,” said Howard. “We didn’t play at all well yesterday and it showed – we went 0 and 2. Today we came back, regrouped. Bottom line, we talked about it and said let’s have some fun. We went out there and made a ton more shots.” “We’re back to 2-2 right in the hunt again.” httpvh://www.youtube.com/watch?v=SMnnIffw11A For Brad Gushue, tonight was all about getting a win on the board, but that proved to be an uphill task against a hard-hitting Jeff Stoughton team. Stoughton took 5 points in the second end and kept the pressure on, taking the game 9-5 and leaving Gushue at four losses. In the other game of the evening, Mike McEwen showed why he is still undefeated, taking an 8-6 decision over Kevin Martin. McEwen continued his pattern of throwing the big weight shots to keep his team on top. For Martin, it was a night of frustration, just not being able to get anything going when faced with the hitting precision of Team McEwen, who showed why they’re undefeated so far in the tournament. “We thought 3-1 would be awesome after the first two days,” said McEwen when asked about his expectations for his team before the tournament began. “We’re pretty pumped with where we are, and if we play well tomorrow, maybe have a chance at first place.” Three more draws on Friday will determine the final standings for semi-finals – and possible tie-breakers, if necessary. The morning draw sees Epping (1-3) vs Stoughton (4-0), Howard (2-2) vs Martin (1-3), Middaugh (2-2) vs Jones (2-2) and Webster (2-2) vs Lawton (4-0). [flickr-gallery mode=”tag” tags=”2012cancupd6″ tag_mode=”all”]