John Epping gave notice that the playoffs are still in reach for teams in the pack, knocking off Jeff Stoughton 8-7 in Draw 7 action at the 2012 Capital One Canada Cup of Curling in Moose Jaw. 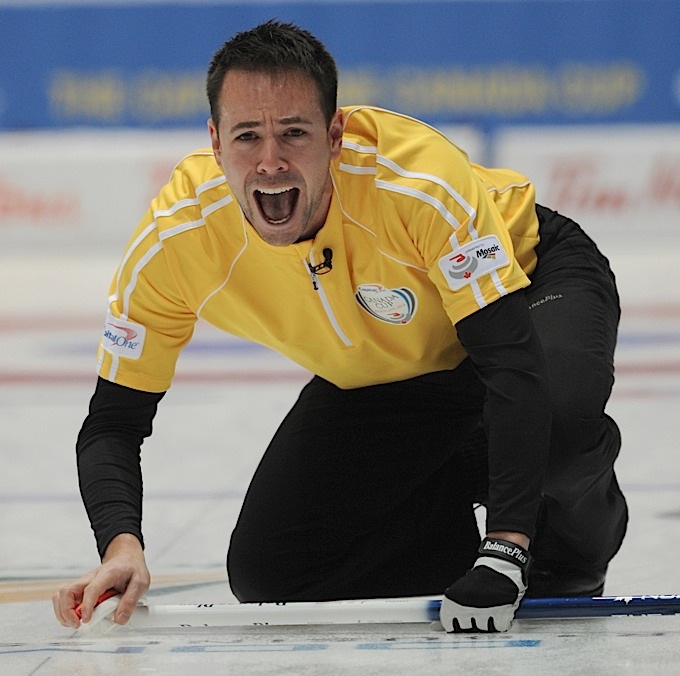 John Epping of Toronto, Ontario, shouts to his front end at the 2012 Capital One Canada Cup (Photo: CCA/Michael Burns Photography)

“I’m really pleased. We could have won a game yesterday,” said Epping after the win. “We’ve been really close this week, just haven’t been spot on.” “We need some help from the other teams to see if we get into the playoffs,” said Epping who now has a 2-3 record and will try to move up in the standings with a game against Brad Gushue this afternoon. Facing undefeated Stoughton, Epping came out firing, taking a single in one, then setting up a second end steal when Stoughton’s in-off attempt didn’t roll far enough. The teams traded singles and deuces until the last end, when Stoughton’s draw against 3 came up short. In other men’s action, Glenn Howard needed an extra end to defeat Kevin Martin 7-6. With the win, Howard moves into a tie for third with Kevin Koe, both with 3-2 records, behind Stoughton and Mike McEwen. Undefeated Stefanie Lawton continued her domination of the women’s field, defeating Crystal Webster 8-4 in nine ends. She and third Sherry Anderson curled 100% through the first four ends, making it hard for Webster to generate any offence. With the win, Lawton clinches a play-off berth. “It feels great. We came out firing today and curled well. We’re just going to keep it up for the next game as well,” she said. “The girls are curling great. Yesterday we had a couple of ends that weren’t quite so stellar, but we talked about that last night and picked it up today.” httpvh://www.youtube.com/watch?v=01cpo3VyY98 In the other women’s game, Sherry Middaugh lost a tight 9-8 battle with Team Jones, skipped by Kaitlyn Lawes. Both teams were caught by the swingy ice, with rocks wrecking on guards or coming up short. Sweeping was key and both teams struggled, but Lawes came out on top, despite a tenth end that saw the time clocks ticking down below a minute, and Lawes’s second-last rock removed for a hogline violation. “Everyone was rushing their shot a little bit, and that isn’t necessarily ideal, but you don’t want to lose the game because you ran out of time,” said Lawes about the wild final end. “Definitely an interesting end, and a little tough on the heart.” Team Jones now moves into third place behind the two teams they are yet to meet, Lawton (5-0) and Nedohin (3-1). In Draw 8 action this afternoon, it’s Nedohin vs Webster (2-3), Lawton vs Overton-Clapham (0-4), Carey (1-3) vs Middaugh (2-3), McEwen (4-0) vs Koe (2-2) and Gushue (04) vs Epping (2-3).