Jeff Stoughton can heave a sigh of relief. With his 4-3 victory over Glenn Howard in the men’s final of the 2012 Capital One Canada Cup of Curling, he not only wins the event for the first time, but he also secures himself a spot in the 2013 Tim Hortons Roar of the Rings in his hometown Winnipeg. 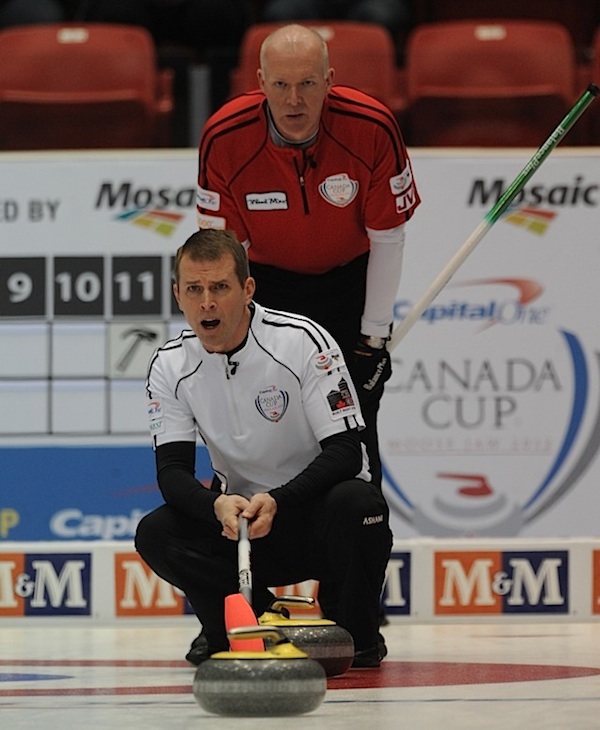 Skip Jeff Stoughton, of Winnipeg looks down the ice as opposing skip Glenn Howard of Coldwater Ont. looks over his shoulder during the men’s final of the 2012 Capital One Canada Cup in Moose Jaw. (Photo CCA/Michael Burns)

“It’s been a tough grind this week. I’m really proud of the guys, and I think it’s going to hit us in the next week that we finally did it, and we don’t have to worry about anything at all for the rest of the year,” said Stoughton after a low-scoring game. “Of course we want to go back to the Brier, but I think it will be a little less stressful.” The first few ends were tight and defensive, with Stoughton forced to 1 in the first, then stealing a single in the second. By the third end it was 2-1 for Stoughton, and he blanked the next two ends, waiting for the sixth end to generate some offence. Stoughton chose to draw behind a centre guard instead of hitting for another blank and retaining last-rock advantage. His rock slid to the back of the four-foot and Howard followed it in, forcing the draw for a single. With Stoughton leading 3-1 at the start of the seventh, Howard took advantage of having hammer for the first time since the third end, but had to work hard to generate a deuce. With two Stoughton rocks in the house, Howard tucked his first shot around to lie shot. When Stoughton came up short on his next shot, Howard had the draw for two to tie the game at 3-3. Stoughton blanked the eighth to keep the hammer and found himself in a bit of trouble in nine, when Howard froze to a stone in the back four-foot. Relying on a big weight take-out, Stoughton removed all stones for the blank, keeping last-rock advantage for the last end. Howard did his best to generate the steal, but the skip from Winnipeg made no mistake on his final hit. “It looked as if we were going to get a couple of deuces early, and they just kept making some fantastic shots, and it didn’t bother us,” said Stoughton. “We just kept plugging away.” httpvh://www.youtube.com/watch?v=U208CT3djrU “We had our chances,” said Howard after the game. “We could have forced him to 1 in nine, which would have been huge, when Wayne’s rolled out, putting us in a little bit of trouble, and he got his blank. Mark had two great tick shots in ten, and that makes it tough for us. But it was a good game, and I’m proud of the boys.” The crowd of 2896 pushed attendance totals for Moose Jaw to a record-breaking 33,160, and it was clear the curlers appreciated the fan support. “It’s a curling community, they know what’s going on,” Stoughton said. “We didn’t get to see much of the town, we were focused in on this event, but all the volunteers we met, all the people in the stands have been great, so it was a great experience in Moose Jaw.” [flickr-gallery mode=”tag” tags=”2012cancupmf” tag_mode=”all”]