Around the House: Draw time at the Silver Fox Curling and Yacht Club

When Carl Delaney took over management of the Silver Fox Curling and Yacht Club in 1991, his mandate was to make the club profitable. Using some creative ideas for a big-ticket fundraising draw, and some terrific partners, volunteers, and participants, he found a way. “The Club was in serious financial difficulties,” says Delaney about those early days. “My primary task was to get the Club back to a profitable business. Not an easy task given that we were close to $1 million in debt, however, as the saying goes: never say never.” The club decided to run a draw for a big-ticket item, but what? They needed something that would sell. 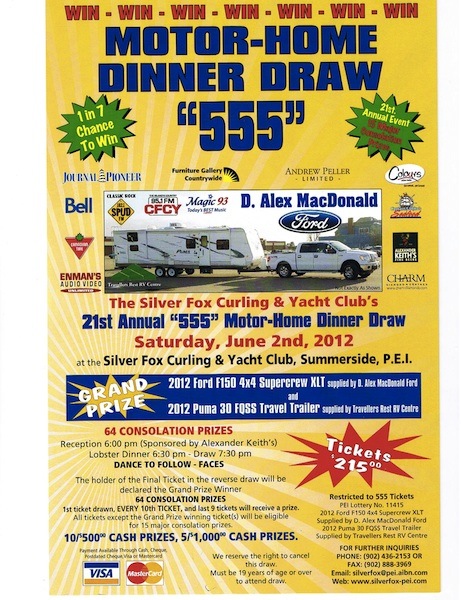 “Our first draw was for a motorhome, and we had to sell 500 tickets at $200 a ticket to make the event profitable. We also had to give buyers a reason to buy the ticket and just not a chance to win a prize,” says Delaney. Taking advantage of the club’s empty ice shed, which was being used during the summer for wedding receptions, auctions and other events, the fundraisers decided to offer a meal with the draw ticket. That was the start of the annual Motorhome Dinner Draw. Ticket holders attended, but they were also encouraged to bring a companion for an additional $25 dinner ticket. A lobster dinner, a bottle of wine for every four people, two drink tickets for every ticket holder – and the chance to win a motorhome – sounds like a great evening out, but the organizers didn’t stop there. For a twist, they made the event a reverse draw: the prize would go to the last ticket out of the drum. Delaney explains: “To make it even more interesting we added a prize, valued at about $200 every 20th number drawn up to the 430th number out of the drum. To add more chances to win, we added a prize for the last nine ticket owners left. This created lots of excitement as we asked them all to come up to the stage for the final 10 tickets to be drawn. We then draw five tickets and give them a prize each.” And then the fun begins, says Delaney. “When we are left with five tickets, a number of attendees that would like to have the grand prize come to the stage and start a bidding event to buy ALL remaining tickets. If all [the final ticket holders] for example agree to $10,000, then the draw is finished and five lucky people go home with $10,000 each. But if they did not sell, they could be the next ticket out and go home with only a $200 prize.” Although the event didn’t sell out in the first two years, the word quickly got out that this was a great night, with food, entertainment and terrific prizes. Since then, it’s been a sold-out event for 19 consecutive years – and raised over $500,000 for the club. There have been changes over the years to keep the event fresh. The grand prize has changed a few times (now it’s a 4X4 truck and Fifth Wheel), and a new drawing procedure puts all tickets back in the drum for some additional cash prizes. This way, those whose tickets are drawn early still have something to win later, even if it’s not the big-ticket item. Raising ticket prices hasn’t affected the turnout, according to Delaney. “To ensure we maintained the profit that we expected, we increased the price of the ticket to $215 and the extra meal ticket to $35 for a total of $250 for two persons to come to the draw and enjoy a Lobster dinner, wine and drinks, entertainment and of course the 1-in-7 chance to win a prize.” Partnerships with local dealers allow the club to purchase the truck and trailer at cost every alternate year, and other prizes are either donated or purchased at cost. Like most curling clubs, the Motorhome Dinner Draw includes a “giving back” component as well: as soon as the doors open at 5:30 p.m., the 50/50 draw starts selling tickets. Delaney says this part of the evening has raised about $50,000 for the local hospital. “Many of our ticket buyers have been buying tickets for 21 years and this is their night out,” says Delaney about the fundraiser that just keeps going, year after year. “[It’s] a fun night, win or lose, and many come as a group every year.” Organizers stick to a tight schedule, “which the ticket holders appreciate,” and rely on about 15 paid staff and a contingent of 60 volunteers to keep the night moving along. The draw is obviously the highlight, but the dinner is part of the fun as well. What’s the secret to serving 500 meals in under an hour? “With some of the best volunteers in the country, we do this in 50 to 60 minutes every year,” he says. 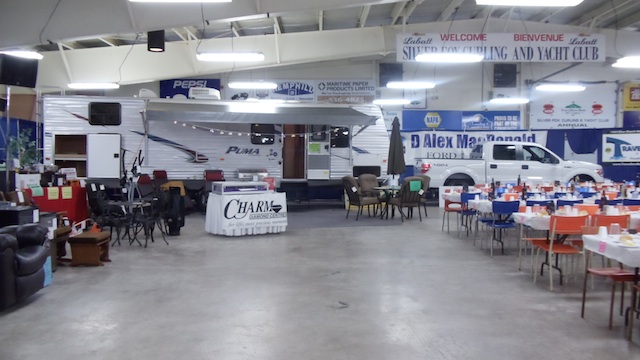