In a year that has seen Jennifer Jones undergo knee surgery and give birth to her first child, the Winnipeg skip is preparing for a return to the competitive curling scene.  And, she’ll be hitting the ice for her first competitive action of the season in Penticton January 10-13 for the World Financial Group Continental Cup. The Jones team, including Kaitlyn Lawes, Jill Officer and Dawn Askin, will suit up for Team North America to take on Team World in the ninth edition of the Cup at the South Okanagan Events Centre with the series presently tied at four wins for each side. Even without their leader, the team has had a strong start to the season with Lawes stepping up to take on skip duties.  After winning their first cash spiel of the season – The Shoot-Out in Edmonton – they battled to the women’s final of the 2012 Capital One Canada Cup in Moose Jaw, losing in a tight match to Stefanie Lawton. Jones came out on top of the Capital One Capital One field in 2011 to secure a berth in the 2013 Tim Hortons Roar of the Rings, December 1-8, in her home town of Winnipeg.  The all-important spot in the Canadian Curling Trials provides the team with the chance to compete for the right to represent Canada at the 2014 Olympic Games in Sochi, Russia. 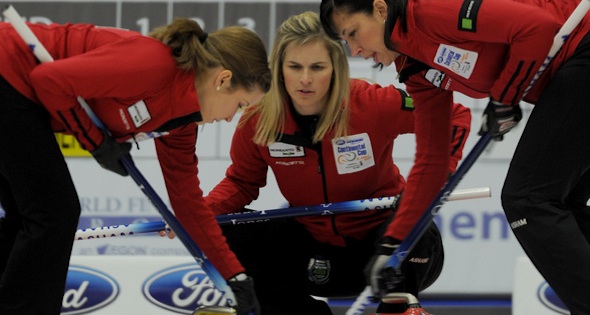 Widely recognized as one of the greatest curlers to ever play the game, Jones has appeared at the Scotties Tournament of Hearts nine times, winning four championships – including a string of three consecutive titles. She also has two silver and bronze medals to her credit in Scotties competition. For curling fans, the most memorable victory will always be associated with what has come to be known simply as “The Shot”…. in the final of the 2005 Scotties Tournament of Hearts in St. John’s.  With the final rock in the tenth end, Jones targeted a stone just outside the rings.  A perfectly executed delivery resulted in a hit and roll that removed Ontario’s heavily guarded shot rock to count four for the Manitobans who walked away with the title. In four trips to the Ford World Women’s Curling Championship, Jones won the gold medal in Vernon in 2008 and the bronze two years later in Swift Current. “You Gotta Be There” when the 2013 World Financial Group Continental Cup comes to Penticton’s South Okanagan Events Centre.  Great seats are available right now by clicking here.