Martin’s Back for Curling’s International Classic

When Team North America hits the ice in Penticton January 10-13 to take on Team World in the 2013 World Financial Group Continental Cup of Curling, they’ll have one of the greatest legends of the game on the home side. 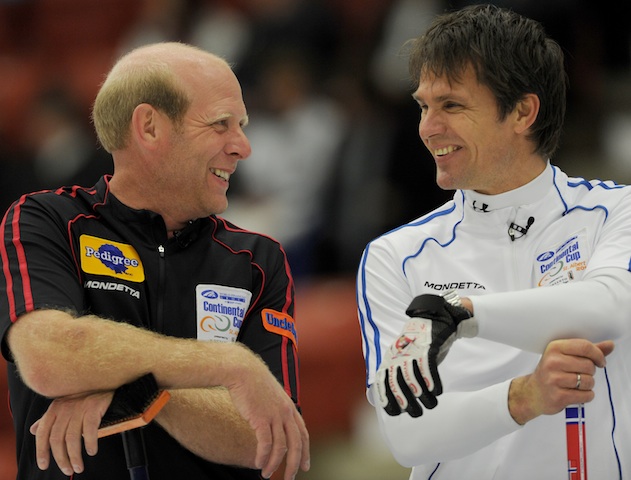 Even though Kevin Martin missed the team’s last event of 2012 while recovering from surgery, he’ll be back at the helm of the defending Olympic gold medal squad next week in the South Okanagan Events Centre. After an emotional victory in the 2010 Olympic Games in Vancouver, Martin will be returning to B.C. with teammates John Morris, Marc Kennedy and Ben Hebert for the World Financial Group Continental Cup with the international challenge series presently locked up at four wins for each side. The Alberta veteran missed the opportunity to extend yet another record at the 2012 Capital One Canada Cup where he’s already the only skip to win the title four times in the ten-year history of the event. Martin’s lengthy list of achievements in competitive curling also includes the silver medal from the 2002 Olympics in Salt Lake City, 11 appearances at the Brier with four Tankard victory celebrations, and a gold medal at the Ford World Men’s Curling Championship… as well as numerous titles on the World Curling Tour. “You Gotta Be There” for the 2013 World Financial Group Continental Cup.  Some of the best seats in the South Okanagan Events Centre are still up for grabs… get yours right now just by clicking here.