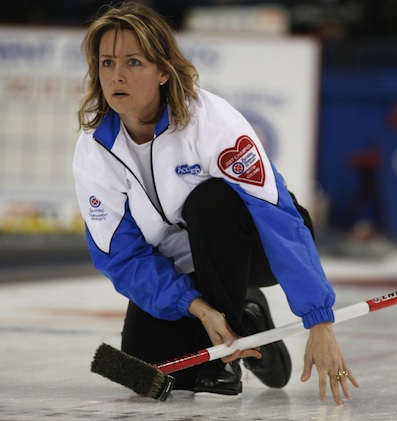 Kelley Law, seen here at the 2007 Scotties Tournament of Hearts, will be captain of Team North America at the 2013 WFG Continental Cup of Curling (Photo CCA/Andrew Klaver)

As Law prepares for her stint as Team North America captain for the 2013 World Financial Group Continental Cup, presented by Monsanto, this week at at Penticton, B.C., about the only thing she would change about 2002 were the results of her own team, which managed to earn just two of the possible 52 points it was playing for. “It was really different,” said Law, the 2000 Scotties Tournament of Hearts and world champion. “When we went, we probably didn’t prepare the same as usual and we regret that now. But it was such a different, exciting event, being part of a huge team. It was good, going into this one, that I’ve been in a Continental Cup. I’m still kind of learning because the formats have changed over the years.” The 2013 World Financial Group Continental Cup, presented by Monsanto, begins this Thursday, Jan. 10, and runs through to Sunday, Jan. 13, at the South Okanagan Events Centre in Penticton, B.C. Law, now a successful realtor in Coquitlam, B.C., will serve as the captain for the six-team North American squad, working alongside coach Rick Lang of Thunder Bay, Ont. They will helm a power-packed North American team that features Canadian men’s teams skipped by reigning world champ Glenn Howard of Coldwater, Ont., and 2010 Olympic gold-medallist Kevin Martin of Edmonton, and women’s teams skipped by world bronze-medallist Heather Nedohin of Edmonton and former world champ Jennifer Jones of Winnipeg. The North American team is rounded out by U.S. teams skipped by reigning national champs Heath McCormick of Lansing, Mich. (who now calls Sarnia, Ont., home) and Allison Pottinger of St. Paul, Minn. Team North America and Team World have alternated victories since the first event in 2002, each with four. Last year at Langley, B.C., the World team prevailed by a score of 235-165. The 2013 version of Team World will again be led by Scottish captain David Hay and Lindholm as the coach. The team features reigning Ford world women’s champion Mirjam Ott of Davos, Switzerland, along with the team she defeated in last year’s world final at Lethbridge, Alta., Margaretha Sigfridsson of Skellefteå, Sweden. Scottish teams skipped by two-time world men’s silver-medallist Tom Brewster (Aberdeen) and Eve Muirhead (Dunkeld), Niklas Edin of Karlstad, Sweden, and Thomas Ulsrud of Oslo, Norway, round out the World entry. “Obviously not playing is a whole lot different,” said Law, who is taking a year off competitive curling this season after placing second in the 2011 B.C. Scotties and third in 2012. “But I’m really excited that I can sit back and watch some great curling and support the curlers in any way that I can, and also support Rick in helping choose lineups and giving my opinion. Any help the players need, I’ll be there for them. It’ll be different, but I think it’ll be really great.” There will be a new scoring system for the 2013 World Financial Group Continental Cup, with the first side getting to 30.5 points being declared the winner. There will now be 18 team games (nine men’s and nine women’s), each worth one point for a win, and one-half point for a tie. All games are eight ends and there are no extra ends.  For the six mixed doubles and six singles matches, one point will also be awarded for each victory, one-half point if tied. The six skins games (two mixed, two women’s and two men’s) now offer a total of five points per game, with the first six ends of each game worth one-half point each, while the seventh and eighth ends are worth one point each. In skins, a count of at least two with last rock or a steal is required in order to win an end.  Otherwise, the points carry over. The winning side receives $52,000 Cdn ($2,000 per member, including captain and coach), while the losing side gets $26,000 ($1,000 per member, including captain and coach). As well, the side that generates the highest points total from the six skins games will receive an additional $13,000 ($500 per player, plus captain and coach). 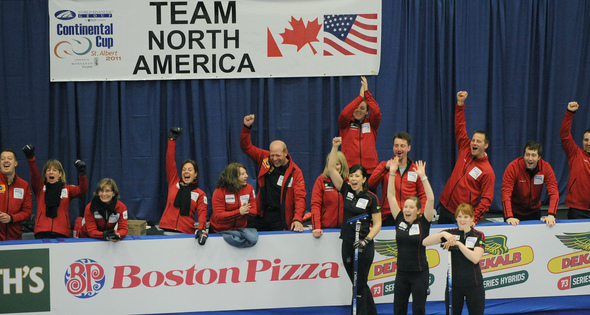 For ticket and other event information, visit www.curling.ca/championships/continentalcup. TSN, the exclusive television network for the Canadian Curling Association’s Season of Champions, and French language sports network RDS/RDS2 will provide complete coverage of this year’s World Financial Group Continental Cup, from the Opening draw (Women’s Team games) on Thursday morning through to and including the final Skins games on Sunday. The World Financial Group Continental Cup, which was staged in a mid-January time slot for the first time in 2011, after previously being conducted in late November/early December, is a joint venture of the Canadian Curling Association, United States Curling Association and World Curling Federation. Event and media inquiries can be directed to: Greg Stremlaw Chief Executive Officer Canadian Curling Association Office: 613.834.2076 x 117 Cell: 613.799.9993 [email protected] www.curling.ca Media inquiries for other story ideas can be directed to: Al Cameron Director, Communication and Media Relations 403-463-5500 [email protected] www.curling.ca