Expect Heavy Traffic on the Road to the Scotties

The 2013 Scotties Tournament of Hearts – the Canadian Women’s Curling Championship – is booked into Kingston’s K-Rock Centre, February 16-24 and the top teams in the country are getting prepared to compete for a spot in the big show. Over the next several weeks, playdowns will be taking place in all ten provinces as well as the territories to determine the 11 teams that will join Team Canada to battle for the most prestigious title in Canadian women’s curling. The action starts out January 10-13 for the Yukon/Northwest Territories followed by the B.C. playdowns January 14-20.  The majority of the provincial competitions will take place during the third week of January with the final representatives being declared in New Brunswick February 3. 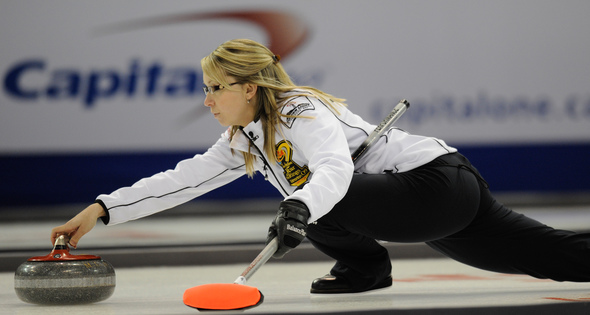 While the fields are still being determined, a number of familiar names have qualified for their respective playdowns including Jennifer Jones and Cathy Overton-Clapham in Manitoba, Kelly Scott in B.C., Amber Holland from Saskatchewan and Alberta’s Shannon Kleibrink. Krista McCarville will take part in the Ontario playdowns, Mary-Anne Arsenault will skip in Nova Scotia with Colleen Jones at third, and Marie-France Larouche will compete once again in Quebec. One team that has already secured a berth in Kingston is the Heather Nedohin foursome from Alberta that will wear Team Canada colours.  The defending Scotties champions – including Beth Iskiw, Jessica Mair and Laine Peters – took the title last year in Red Deer and moved on to win the bronze medal at the 2012 Ford World Women’s Curling Championship down the road in Lethbridge. Regular updates with competition results from across the country will be featured on the Scotties website. “You Gotta Be There” for the 2013 Scotties Tournament of Hearts in Kingston when the best teams in the country shoot for the Canadian championship.  Tickets for all the excitement are available now by clicking here.