The Sandra Schmirler Foundation has announced a new fund-raising initiative with the introduction of two new “Champions.” Jon Mead and Cathy Overton-Clapham have agreed to spearhead the awareness building initiative as the Foundation continues to strengthen its ties with the curling community. The Champions role will be one of mentoring youth and acting as spokespersons for the Foundation. “2013 marks the 15th Anniversary of Sandra and her team winning Olympic gold medals,” said Theresa Breen, Chair of the Sandra Schmirler Foundation. “We are very grateful to the curling community for their on-going support and we continue to work closely with the Canadian Curling Association (CCA) to ensure that Sandra’s legacy lives on.” 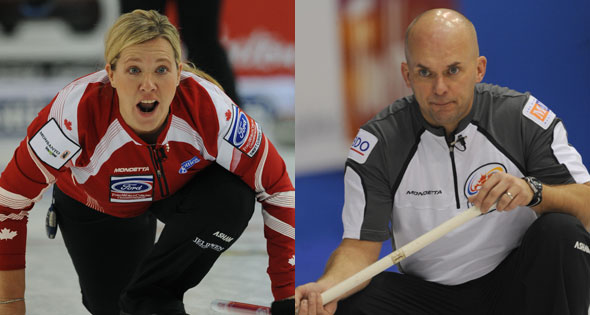 Cathy Overton-Clapham, left, and Jon Mead have been named “Champions” for the Sandra Schmirler Foundation. They will help mentor youth and act as spokespersons for the Foundation. (Photos, CCA/Michael Burns)

In recognition that all “Champions Start Small,” the Foundation raises and donates funds across Canada for the care of premature and critically ill babies and to help develop future champions. Since its inception in 2001, the Foundation has donated over $2.2 million dollars to help purchase life-saving equipment in neo-natal units in 27 hospitals. “Jon and Cathy will be exceptional ambassadors for the Foundation,” declared Greg Stremlaw, CCA Chief Executive Officer and Foundation Advisor. “They are not only highly respected and outstanding athletes with impressive credentials but are both role models for young Canadian curlers.” Jon won the Junior Men’s Canadian Championship in 1986 and Cathy won the Junior Women’s in 1989. Between them Overton-Clapham and Mead have won two World Curling Championships, seven Canadian Championships and sixteen Provincial titles. Both are competing for the ultimate prize in curling – a trip to the Olympics in Sochi in 2014. Cathy’s team has qualified for the Pre-Trials and Jon’s team has earned a direct entry into the 2013 Canadian Curling Trials. “I was absolutely thrilled when I was asked to be a Champion for the Sandra Schmirler Foundation,” said Cathy, adding that “this is a wonderful honour. Curling has been very good to me and I welcome the opportunity to give back, to mentor juniors and to help keep Sandra’s memory alive.” “For me, this is a chance to share my experience with youth and help them to become Champions,” said Jon. “It’s a chance to work with the curling community and make sure that we never forget Sandra and that we continue to support the Foundation and their efforts to help save the lives of babies born too small, too soon, too sick.” The Sandra Schmirler Telethon will be broadcast live on TSN on February 17. Donations can be made on line at sandraschmirler.org or by calling toll free 1.866.210.6011. For more information: Robin Wilson Leadership Director, Sandra Schmirler Foundation [email protected] 604-230-5871 (cell)