Road to the Scotties – West Update

The second team to lock down a spot in the 2013 Scotties Tournament of Hearts was determined January 13 at the Fort Smith Curling Club in the Northwest Territories when Kerry Galusha played her way to another shot at the Canadian Women’s Curling Championship. 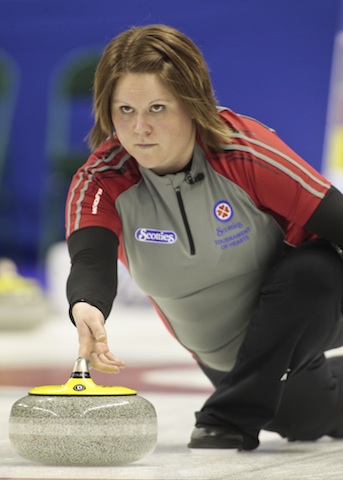 Galusha, making her eleventh appearance at the Scotties, will join Team Canada’s Heather Nedohin in the 12-team field that moves into Kingston’s K-Rock Centre, February 16-24 to compete for the national title. The British Columbia representative will be decided by the end of this week in the provincial showdown, January 14-20 at the Cloverdale Curling Club.  Two-time Scotties champ Kelly Scott is the front-runner, with 2009 Scotties finalist Marla Mallett looking to bounce back from a loss to Scott in last year’s championship final. In Saskatchewan, 12 teams head to Balgonie, January 23-27, with their sights set on the big show in Kingston.  The top seeds include Stefanie Lawton, Amber Holland and Michelle Englot – seasoned veterans on the competitive curling circuit. Shannon Kleibrink, Crystal Webster and Valerie Sweeting are ranked at the top of the Alberta field that will face off January 23-27 in the Lethbridge Curling Club to crown the provincial champions. Results from playdowns across the country will be featured on the Scotties Tournament of Hearts website. “You Gotta Be There” when the Scotties Tournament of Hearts makes its first trip to Kingston.   Get your tickets right now for the premiere event in women’s curling by clicking here.