The M&M Meat Shops Canadian Juniors will be played Feb. 2-10 in the Suncor Community Leisure Centre at MacDonald Island Park in Fort McMurray, Alta. It marks the eighth year of title sponsorship by M&M Meat Shops, Canada’s leading retail chain of specialty frozen foods. Prior to this season, 13 men’s and 13 women’s teams, representing the 10 provinces plus separate entries for Northern Ontario, Northwest Territories and Yukon, had participated in a round robin, leading to playoffs. 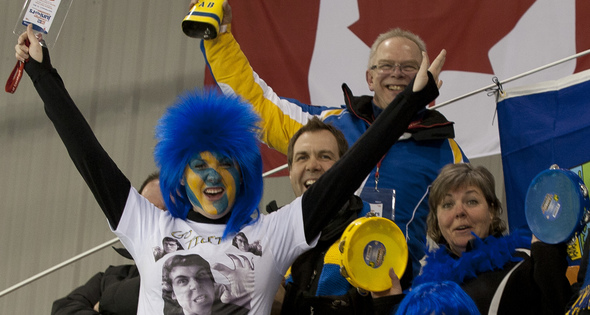 However, there is a new format this year in order to accommodate the 14 men’s and 14 women’s teams, including newcomer Nunavut, representing the Canadian Curling Association’s Member Associations (provincial/territorial). For each gender, the teams have been seeded, based on the won-loss records of the provinces/territories at the Juniors for the past three years, and then placed into two Pools — A & B. The teams will play a round robin within their Pool (six games), after which the top four in each advance to the Championship Pool beginning Wednesday for a four-game round robin against teams from the other Pool, with their won-loss records carried forward. At the completion of the Championship Pool for each gender on Friday, Feb. 8, the teams with the best won-loss records advance to their respective finals, while the second- and third-place finishers meet in semifinals to determine the other finalists. The team that didn’t qualify for the Championship Pool will contest a similar round robin in the Seeding Pool, beginning Wednesday as well, so that by Friday all teams will have played at least nine games and will be ranked by their won-loss records to determine provincial/territorial seeding for next year’s event in Liverpool, N.S. In addition, there will be a two-day Mixed Doubles competition on the final weekend involving curlers from the non-playoff teams. Round-robin games will be played at both the CNRL Arena 2 (Sheets A-E) and the Oilsands Curling Club (Sheets F-K). TSN/RDS, the official broadcaster of the CCA’s Season of Champions, will provide live coverage across Canada of the men’s and women’s finals from the CNRL Arena 2. The men’s final is scheduled for 5 p.m. MT Saturday, Feb. 9, while the women’s final goes Sunday, Feb. 10, at 5 p.m. MT as well. The Canadian junior men’s curling championship began in 1950 in Quebec City. Alberta has since won a leading 16 Canadian junior men’s titles, the last by Brendan Bottcher in 2012, and six junior women’s crowns, the last by Jocelyn Peterman, also in 2012, when both titles were swept by the province last season in Napanee, Ont. In fact, it was the third consecutive year that one province had claimed both the men’s and women’s crowns. You can find the draw schedule for the M&M Meat Shops Canadian Juniors at: www.curling.ca/championships/juniors/scores-and-standings/draw-schedule/. Ticket information is available at: www.curling.ca/championships/juniors/tickets/. Saskatchewan leads with 11 women’s titles since the inaugural event in 1971 in Vancouver. The men’s and women’s championships were contested separately until being combined, beginning in 1987 in Prince Albert, Sask. Alberta has previously hosted seven Canadian junior men’s and six Canadian junior women’s championships, the most recent in Calgary in 2011. The winners of the M&M Meat Shops Canadian Juniors will then represent Canada at the World Juniors, Feb. 28-March 10, 2013, in Sochi, Russia, which will serve as a test event for the 2014 Winter Olympics curling competition. Canada has won a leading 17 world junior men’s titles since 1975 and eight women’s crowns (one behind Scotland) since 1988. The last Canadian teams to win world junior titles were skipped by Saskatchewan’s Marliese Kasner (Miller) in 2003 in Flims, Switzerland, and by Alberta’s Brendan Bottcher in Östersund, Sweden, in 2012. For further information, including media accreditation, contact: Al Cameron Director, Communication and Media Relations Canadian Curling Association Cell: 403-463-5500    [email protected] www.curling.ca Jodie Mercier Host Committee Co-Chair 2013 M&M Meat Shops Canadian Juniors [email protected] Tyler Spitzer Host Committee Co-Chair 2013 M&M Meat Shops Canadian Juniors [email protected]