Funding to help Canadian curlers in pursuit of gold in Sochi

OTTAWA — The Canadian Curling Association (CCA) will be one of the beneficiaries of a $31-million investment by the federal government into winter sports leading up to the 2014 Olympic and Paralympic Winter Games in Sochi, Russia. The funding announcement was made on Thursday in Calgary by the Honourable Bal Gosal, Minister of State (Sport). 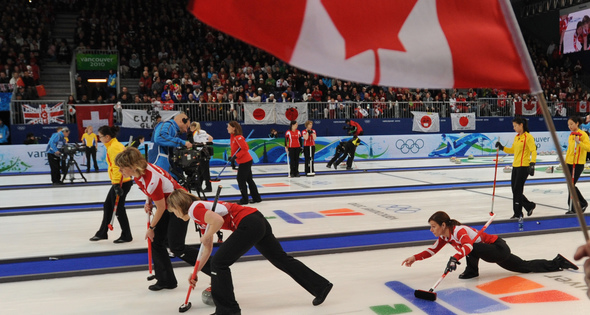 Cheryl Bernard delivers a rock during the 2010 Winter Olympics in Vancouver. Canadian curlers competing for a berth in the Sochi Games will benefit from Thursday’s federal government funding announcement. (Photo, CCA)

The CCA was one of 11 winter national sport organizations named to receive funds through Sport Canada’s Sport Support Program, an announcement that was applauded by CCA Chief Executive Officer Greg Stremlaw. “It’s a positive development for curling in Canada,” said Stremlaw. “Curling has played a leading role as Canada’s athletes strive to succeed on the international sporting stage. This funding will play a significant role in our ambition to maintain our standing as the benchmark country for curling around the world. Our country’s sports organizations can’t follow through on these lofty goals without the support of government, and today’s announcement is a welcome boost for our sport, and the winter sports movement in Canada.” Canadian curlers have reached the podium in every Olympics since the sport achieved medal status in 1998 at Nagano, Japan. Our country’s teams have collected three gold medals, three silver medals and two bronze. In 2010 at Vancouver, Kevin Martin’s men’s team from Edmonton won the gold medal while Cheryl Bernard’s team from Calgary won silver. As well, Canada’s Paralympic curlers have won back-to-back gold, with Chris Daw prevailing in 2006 in Turin, Italy, and Jim Armstrong capturing gold in 2010 in Vancouver. “Our Government is proud to support our high-performance athletes as they prepare for Sochi,” said Minister of State Gosal. “Along with all Canadians, I look forward to cheering on our athletes next winter at the 2014 Olympic and Paralympic Games.” Canada’s Olympic curling teams will be decided at the 2013 Tim Hortons Roar of the Rings Canadian Curling Trials from Dec. 1-8 at the MTS Centre in Winnipeg. Our Paralympic team will be decided through a selection process from a pool of eligible players. “It’s encouraging to have the support of the federal government and Minister Gosal as we continue down the road to Sochi,” said Stremlaw. “Minister Gosal has become a curling fan, which is terrific to see, and we were pleased that his confidence in Team North America at the recent World Financial Group Continental Cup in Penticton, B.C., was rewarded with his winning a Twitter bet with Scottish Sports Minister Shona Robison.”