Curlers and community members, including 27 past presidents of the Chatham Granite Curling Club in Chatham, Ont., gathered on Nov. 10 to celebrate and reminisce about 150 years of curling tradition that began simply with a few players throwing stones on the frozen Thames  River . 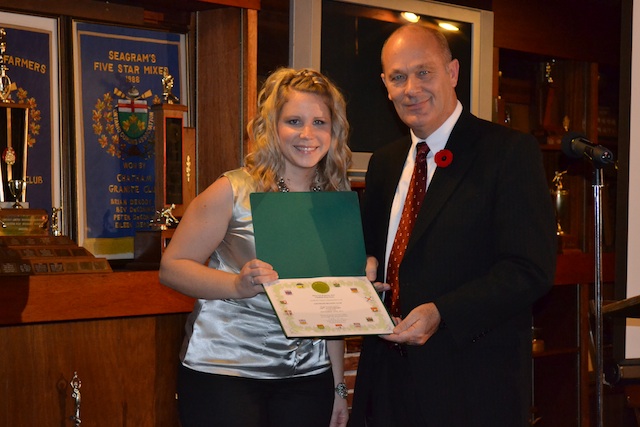 “The Granite Club plays a very essential role in our community because there are very few places in a small city like Chatham that can bring together a good cross section of its citizens for competition, social activities and fellowship,” says Melanie DeSchutter, Granite’s current President. “Where else can you meet people from all ages and backgrounds in a positive, pleasant and affordable setting during the winter season? Without our club these opportunities would be lost.” Chatham Granite’s contribution to the community is significant. On the ice, there are charity bonspiels, like “Curl for the Cure”, and programs for schools and Special Olympics curlers. A special “Sunday Brunch” brings together curlers and non-curlers for a friendly, social meal. On-ice advertising allows members of the local business community to put themselves in the public eye. “Where else can over eighty local establishments get name recognition in one location?” says DeSchutter. “With all the activities that occur at the club, these businesses get valuable exposure at a reasonable cost. They help the club and the club helps them. Everyone benefits from this arrangement.” Chatham Granite has faced its share of challenges, most of them associated with trying to build and maintain a facility dedicated to curling.From the first days of throwing cast iron “stones” across the frozen river, curlers moved indoors, eventually taking over an old woolen mill in the 1920s and remaining in that location on William Street North – with some renovations and transformations along the way – until today. 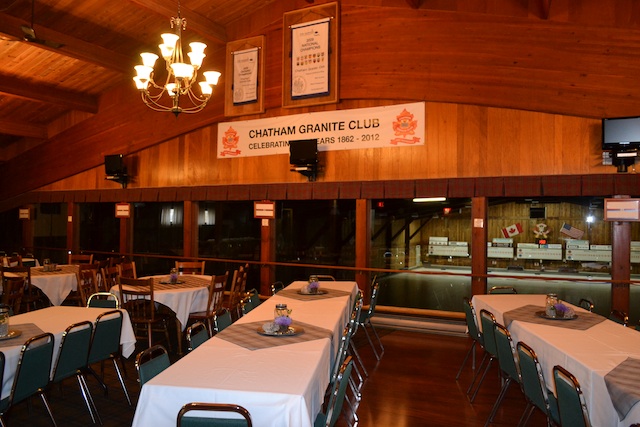 In the early years, curlers had to share the facility with skaters and hockey players. At another point in its history, the arena was condemned and about to be sold off for scrap metal. But an enterprising committee of curlers purchased the building, narrowly avoiding disaster. “The arena was purchased for $3,300.00 on August 8, 1939 by a committee headed by Peter Gilbert Sr.,” reports the club’s anniversary booklet, researched and prepared by 40-year member Reg Johnson. “The building sale was closed on a Friday and Pete asked that they not cash his cheque until Monday. The reason for this was quite simple; he did not have the $3,300.00. They cashed the cheque on Friday anyway and Pete’s bank manager covered his cheque for the weekend, or all would have been lost.” In 1965 the club building was demolished, making way for a new facility. And since then, upgrades and renovations, some of them funded by Ontario Trillium Foundation grants, have allowed the club to grow and thrive, hosting provincial championships such as the Ontario Blue Light Men’s Tankard Championship in 1987 and 1990, and the Ontario Senior Men’s and Women’s in 1995. In 2009, Chatham Granite celebrated a national championship when the team of Bob Stafford, Ben Curtis (vice), Mark Patterson (second) and Ed DeSchutter (lead) won the men’s title at The Dominion Curling Club Championship. In their honour, the club’s upstairs lounge was renamed “The Dominion Lounge.”At the Anniversary Celebration on Nov. 10, visitors had a chance to socialize and enjoy poring over club memorabilia. The 27 past presidents in attendance posed for an official photograph, and a cocktail reception was later followed by a formal dinner and dance, with guest speaker Jim Waite sharing stories about Olympic curling events he as attended in his role as one of the Canadian Curling Association’s High-Performance National Team coaches. Local government officials presented commemorative plaques and certificates to mark the milestone, and the Ontario Curling Association was on hand to present the 2012 Colts Provincial Championship Banner to the Chatham Granite Club Team of John Young Jr., Ed DeSchutter, Graeme Robson and Andrew Willemsma. 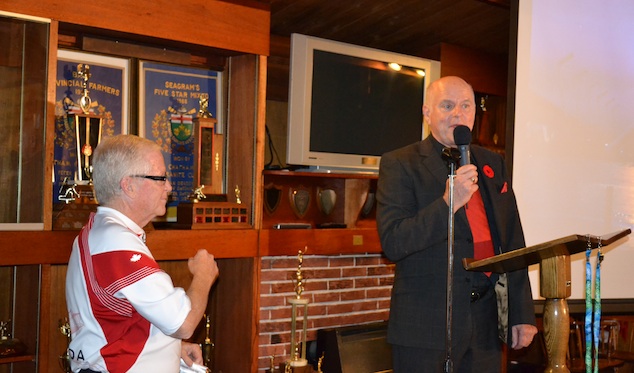 “All the credit for putting together our Anniversary Celebration goes towards Reg Johnson and his wife Marjorie,” says DeSchutter. “They put together a great team of volunteers to decorate and meet with the caterer and gather up curling memorabilia. Reg had a vision of having a formal dinner and getting old friends together to celebrate and he really pulled the event together and worked tirelessly to make sure everything went smoothly.” Anniversary celebrations are only partly about looking back; they’re also about focusing on the future. With that in mind, Chatham Granite offered new memberships this season at the special rate of (what else?) $150, an incentive that attracted about 30 new curlers to the club, some of them completely new to the sport. “I’m proud to be the President of the Chatham Granite Club during this wonderful milestone,” says DeSchutter. “It is a huge milestone for the Chatham-Kent community and I think it’s a testament to the curling community that we are here and that Chatham-Kent has supported the club for 150 years. I’m honoured to be a member of a club with such a rich history that so many Chatham Kent families continue to support generation after generation.” “I also believe it shows what a great sport curling is,” adds DeSchutter, “and our club’s long history is proof that curling is loved by so many in this community, province and country.”