LAS VEGAS – Curling fans from the most passionate to those who are curious to check out the sport in an exciting setting will get their first chance to buy tickets Friday, Feb. 1, for the 2014 World Financial Group Continental Cup at the Orleans Arena in Las Vegas.

Team North America will be taking on Team World in the 2014 World Financial Group Continental Cup, which will take place in Las Vegas next January. (Photo, CCA/Michael Burns)

The four-day event pitting Team North America against Team World in a Ryder Cup-style competition will take place from Jan. 16-19. It will mark the first time that this event, sanctioned jointly by the Canadian Curling Association, World Curling Federation and U.S. Curling Association, will be held in the United States. Early indications are that this will be one of the most anticipated events on the 2013-14 curling calendar, especially with the Olympic Winter Games in Sochi, Russia, opening just three weeks later. “The Canadian Curling Association (CCA) is really excited about the 2014 World Financial Group Continental Cup being hosted by Las Vegas,” said Greg Stremlaw, Chief Executive Officer of the CCA. “A lot of Canadians living in Western Canada love Las Vegas as a vacation destination year round. Taking that into consideration along with the fact that the largest concentration of curlers in the world is in Western Canada we are confident a few thousand Canadians are going to find their way to Las Vegas in January of 2014.” 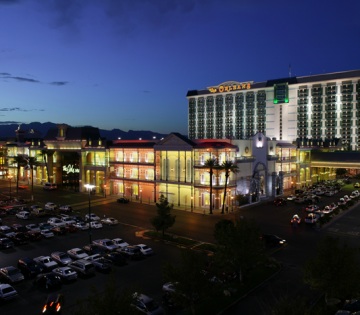 The Orleans Hotel and Casino will play host to the 2014 WFG Continental Cup next January.