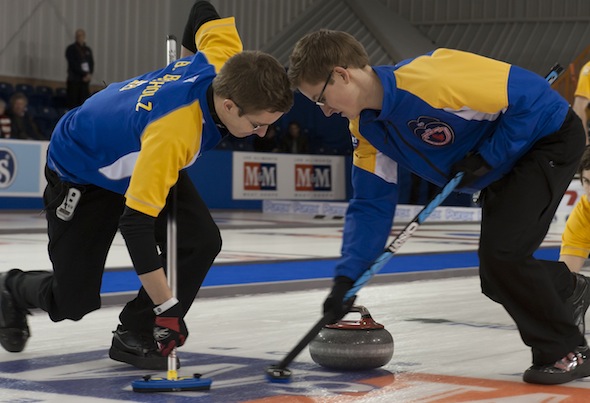 Nunavut will be sending teams to the Canadian junior championship for the first time in the event’s history, with David Kakuktinniq’s team from Rankin Inlet playing in the men’s draw and Sadie Pinksen and her team from Iqaluit competing for the women’s title. As well, with 14 teams in each gender (representing each of the 10 provinces in addition to Northern Ontario, the Northwest Territories, Yukon and Nunavut), a new format will be used that will see the field split into two seven-team pools, with seeding based on win-loss records at the Canadian Juniors over the past three years. Teams will play a round robin within their pool, leading to a championship pool beginning on Wednesday, which will then lead to the weekend playoffs. Teams that don’t qualify for the championship pool will play a seeding pool to determine rankings for the 2014 Canadian Juniors in Liverpool, N.S. Meantime, non-playoff teams will participate in a mixed doubles competition. Round-robin games will be played at both the CNRL Arena 2 (Sheets A-E) and the Oilsands Curling Club (Sheets F-K). For ticket information, go to: www.curling.ca/championships/juniors/tickets/. TSN/RDS, the official broadcaster of the CCA’s Season of Champions, will provide live coverage across Canada of the men’s and women’s finals from the CNRL Arena 2. The men’s final is scheduled for 5 p.m. MT Saturday, Feb. 9, while the women’s final goes Sunday, Feb. 10, at 5 p.m. MT as well. The home province will be looking for a second straight sweep of the Canadian titles after Brendan Bottcher and Jocelyn Peterman claimed gold medals at last year’s championships in Napanee, Ont. Two players — twin brothers Landon (second) and Bryce (lead) Bucholz — are back from last year’s world junior championship gold-medal team, which is now skipped by Thomas Scoffin, who replaces the aged-out Bottcher. It will be Scoffin’s record seventh consecutive appearance in the Juniors, but first for Alberta after representing the Yukon in the previous six. Scoffin, the 2012 Winter Youth Olympics bronze-medallist, is also the youngest to ever skip in the Canadian Juniors; he was 12 when he made his debut in 2007. Scoffin’s seventh appearance will match David Aho’s (Northwest Territories) record for most appearances at any position, a feat that will also be accomplished this year by the Yukon’s skip and third Mitch Young and Will Mahoney. Also in the men’s field will be Nova Scotia’s Stuart Thompson, who went 9-3 last year in Napanee before losing a third-place tiebreaker, and returning skips Félix Asselin of Quebec and Brady Scharback of Saskatchewan, who both posted 7-5 records a year ago. 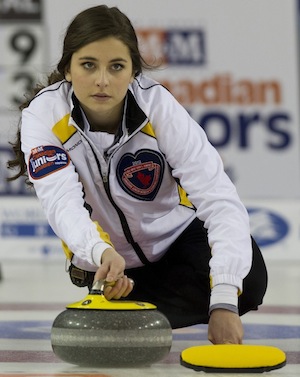 On the women’s side, Manitoba’s Shannon Birchard returns in hopes of improving on the silver medal she won last year in Napanee, while Yukon skip Sarah Koltun will stretch her record streak to seven consecutive trips to skip at the Canadian juniors. Also in the field are Ontario’s Jamie Sinclair, who tied for fourth last year with a 7-5 record, and B.C. skip Corryn Brown, who teamed with Scoffin to win bronze at the Youth Olympics. This is the eighth year of title sponsorship by M&M Meat Shops, Canada’s leading retail chain of specialty frozen foods, since beginning its association with the 2006 Canadian Juniors in Thunder Bay. The Canadian junior men’s curling championship began in 1950 in Quebec City. Alberta has since won a leading 16 Canadian junior men’s titles, including last year’s sweep in Napanee. It was the third consecutive year that one province had claimed both the men’s and women’s crowns. Saskatchewan leads with 11 women’s titles since the inaugural event in 1971 in Vancouver. The men’s and women’s championships were contested separately until being combined, beginning in 1987 in Prince Albert, Sask. Alberta has previously hosted seven Canadian junior men’s and six Canadian junior women’s championships, the most recent in Calgary in 2011. The winners of the M&M Meat Shops Canadian Juniors will represent Canada at the World Juniors, Feb. 28-March 10, 2013, in Sochi, Russia, which will serve as a test event for the 2014 Winter Olympics curling competition. Canada has won a leading 17 world junior men’s titles since 1975 and eight women’s crowns (one behind Scotland) since 1988. The last Canadian teams to win world junior titles were skipped by Saskatchewan’s Marliese Kasner (Miller) in 2003 in Flims, Switzerland, and by Bottcher in Östersund, Sweden, in 2012.