During the 2011-2012 season, Helen Radford found herself at the helm of a unique coaching project: take four talented young curlers from different parts of the country, turn them into a team, and prepare them to represent Canada at the first Winter Youth Olympic Games. A challenge? Yes. A success? Most definitely! 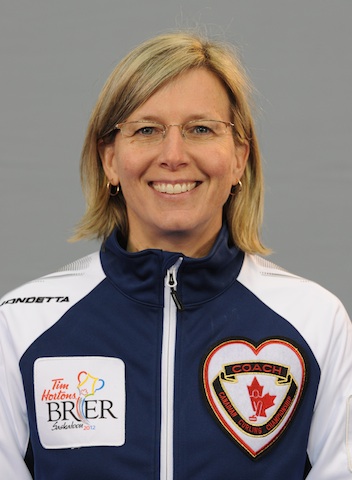 “I must admit that this was one of the most rewarding coaching experiences that I have ever had because it challenged me to think outside the box of what we normally do in curling,” says Radford, whose resumé includes playing vice on Colleen Jones’s Nova Scotia rink at the 1997 Scotties Tournament of Hearts, as well as more than 20 years of coaching experience in the sport. After moving from Halifax to Calgary in 1998 to work as a teacher and part-time assistant coach with the Canadian Curling Association’s National Training Centre (NTC), Radford became involved in the first Women in Coaching Apprenticeship program, which gave her the opportunity to see the high-performance coach’s job up close in a number of high-profile international competitions, including the 2002 Winter Olympic Games in Salt Lake City. She was also involved in an unusual project. “During the 2002-2003 curling season, the NTC was given a grant by the Calgary Olympic Development Association (the legacy organization of the 1988 Winter Olympics) to form a women’s team based on individual selection. I was tasked to put this team together and gained invaluable experience, as this was new to curling,” says Radford. “This experience certainly helped me with our selection of our 2012 YOG team.” Her teaching and coaching background made her the perfect candidate for the job of selecting and training Team Canada for the first Youth Olympic Winter Games in Innsbruck, Austria, but landing the job took a bit of management. “Danny Lamoureux (the CCA’s Director, Championship Services & Curling Club Development) and I approached Gerry Peckham (Director, High Performance) and pretty much convinced him that I was the right person for this job,” says Radford. And why not? Radford’s coaching credentials were solid, and she had spent her entire teaching career with the YOG age group. She saw this as an opportunity to make a difference in these young curlers’ lives. 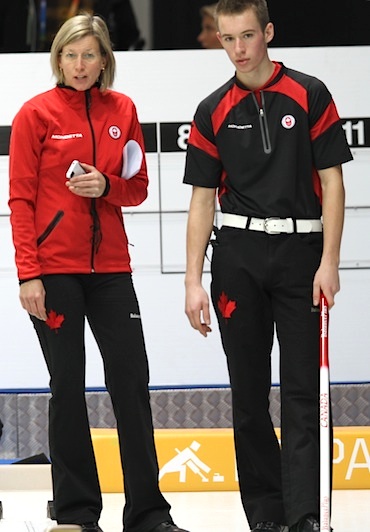 “I knew we were going to select four exceptional people, but I wanted to make sure that they grew as individuals and realized that they were going to be role models. [I wanted] to give them a very well-rounded experience.” The selection process focused on student athletes competing at the Canada Winter Games who could demonstrate they were “the leaders of tomorrow.” The application process included an essay submission as well as an interview and performance on the ice. Radford chose Thomas Scoffin (Yukon), Corryn Brown (B.C.), Derek Oryniak (Man.), and Emily Gray (P.E.I.). With the selection completed, Radford began the process of turning four individual players into a cohesive team. Starting from scratch, she put a plan together for the 10 months leading up to the competition in Innsbruck. “We met six times in six different provinces and had very different goals and experiences on each stop,” says Radford. “We had times when it was physically, technically and mentally challenging for them, times of just getting to know each other. We played in two junior competitions, competed against our National Wheelchair Team, and met many of our top athletes.” Throughout the process of becoming a team, Radford and the young curlers met the challenges head on. “I must say that all four athletes took personal responsibility and accountability and were so mature with the way they handled conflict,” says Radford. “In our first competition as a team, we were able to put together a great run and won the consolation event at the OVCA JSI SuperSpiel in Ottawa. That event gave us a chance to prove that when we work together, we could perform well and achieve our goals.” The team arrived in Innsbruck in February 2012, fit, rested and ready to take on the world. By the end of the round robin, Team Canada was sitting in second place with a 5-2 record in its pool. After defeating the Czech Republic in the quarter-finals, Canada came up against a surging Italian team in the semifinal – and lost. With the gold medal no longer in its grasp, Team Canada had to regroup and refocus, which is exactly what it did en route to winning bronze, the first medal for a Canadian team at the Youth Olympic Games. “It was pretty heart-breaking (not to make the final) but we have a great coach who got us out of the funk,” said Scoffin after the bronze-medal win. “I think we came back as the more prepared team overall and it turned out for us.” 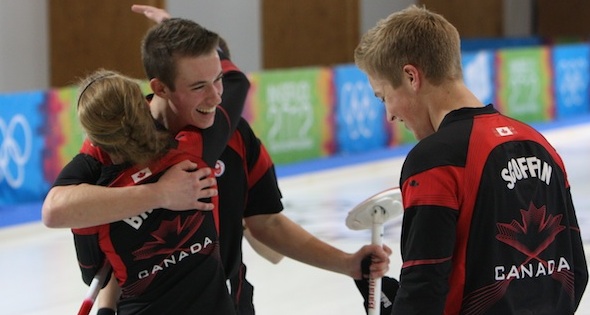 “There is no question that my proudest moment occurred when the team won the bronze medal,” says Radford, looking back. “I was so proud of the journey that we took together to get to that moment of celebration. They had each other’s backs and it was a true team celebration.” Radford also emphasizes that the team wasn’t made up of just coach and players – there was a huge support network working tirelessly and mostly unrecognized behind the scenes. The Canadian Curling Association provided continuous support in the form of coaches, trainers, and opportunities to prepare on and off the ice. The curlers’ families were another important factor. “It isn’t a secret why Thomas, Corryn, Derek and Emily are as amazing as they are. Once you meet their families, it is easy to see why they are so successful,” says Radford. Support for the team came from another source, as well. Alerted by coaches Elaine Dagg-Jackson and Jim Waite, competitive curlers in the National Team Program sent words of encouragement. “Jeff Stoughton, John Morris, Marc Kennedy, Stefanie Lawton, Sonja Gaudet, David Nedohin, Team Howard, Team Epping, Team Holland, Team Jacobs and the list goes on,” Radford says. “I saved the letters and had the athletes read them once we were settled in Innsbruck. It was a very emotional moment and I know that our YOG team felt the support of all of our curlers in Canada.” Radford embraced the coaching challenge of taking four curlers who had never played together and transforming them into a team, but for her, it wasn’t just about success on the ice. “I knew the athletes would gain so much from the curling side of things, but I wanted to provide an environment where they would grow as people,” she says. “The team soon realized that they would become role models to others and with that came a higher level of responsibility, and they all accepted that role willingly. I am very proud of all four of them and how they handled themselves throughout the entire process both on and off the ice.” Editor’s Note: Thomas Scoffin is skipping Team Alberta, and Corryn Brown is skipping Team British Columbia at the 2013 M&M Meat Shops Canadian Juniors starting tomorrow in Fort McMurray. Emily Gray will be competing with Team UPEI at the upcoming Canadian University Curling Championship in Kamloops. Derek Oryniak was a semifinalist in the Manitoba Junior Men’s Provincial Championship. 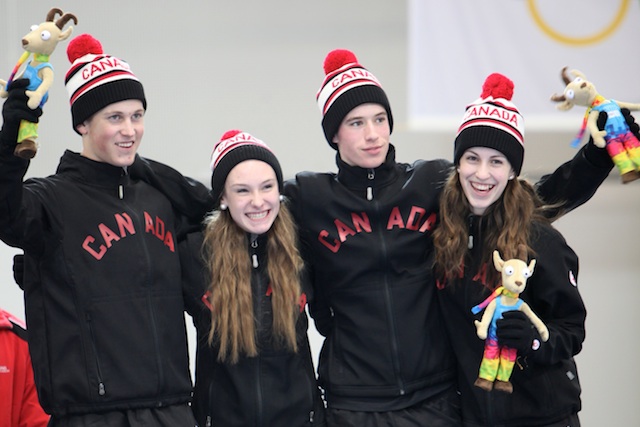 Bronze medallists (l-r) Thomas Scoffin, Corryn Brown, Derek Oryniak and Emily Gray. Says Radford: “Emily was the best female sweeper at the competition and put her heart and soul into her role. Derek brought great depth because not only was he a great second stone, but he went in the house with his skip and it was obvious that he had great athletic and interpersonal skills. Derek became the glue for our team. Corryn showed knowledge for the game that surpassed anyone her age. Thomas was an awesome leader. Time after time, he showed poise and strength to maximize his players and was able to make the big shots when he needed to.” (Photo WCF/Richard Gray)