FORT McMURRAY, Alta. — The scores were immaterial. What was more important was the two teams’ presence on the ice at the CNRL Arena 2. 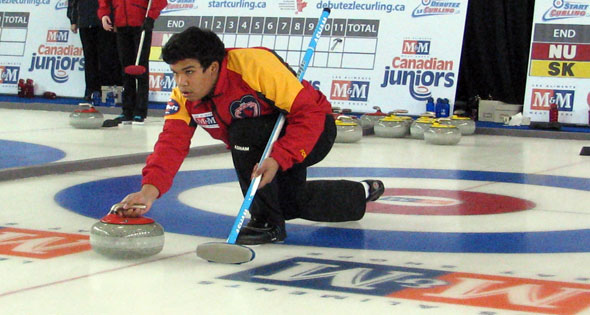 Teams from Nunavut both went down to defeat in Saturday’s opening draw of the M&M Meat Shops Canadian Junior Men’s and Women’s Curling Championships. What was more notable was the fact that it was the first time Nunavut has been represented at the Canadian Juniors. The scores — David Kakuktinniq’s team from Rankin Inlet (third Jamie Airut, second Darren Makkigak, lead Arthur Siksik, coach Kevin Bussey) bowed 14-2 to Saskatchewan’s Brady Scharback (Saskatoon) while 13-year-old Sadie Pinksen and her team from Iqaluit (third Christianne West, second Katie Chislett Manning, lead Emily-Grace Matthews, coach Lynn Kreviazuk) fell 17-3 to Alberta’s Karynn Flory (Edmonton) — didn’t diminish the achievement. “Coming into this, we were realistic in our expectations,” said Bussey, who also serves as president of the Nunavut Curling Association. “Kudos to the sport of curling because I don’t think any other sport in the world would allow guys who are new to the sport to compete with the world’s best. Our teams are just ecstatic about coming here. It’s a treaty experience, and a lot of people back in Nunavut appreciate the experience as well. To see the kids competing with all the other provinces and territories is just awesome.” 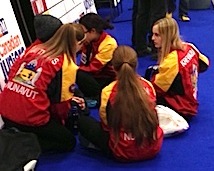 Both Nunavut skips came off the ice with smiles on their face after making their final shots of the game to score a single point before shaking hands with their opponents. “I was really happy to make the shot,” said Pinksen, who made a draw to the four-foot with her last shot of the game. “I think we all did our best and we’ll do it again in our next game. “It felt pretty good,” added Kakuktinniq, 19, after his hit-and-stick for a single. “And it feels good to represent  Nunavut. We just want to have fun and improve as much as we can.” In other opening-round games junior men’s games, Ontario’s Aaron Squires (St. Thomas, Ont.) shaded Alberta’s Thomas Scoffin (Edmonton) 5-4, Mitch Young of the Yukon (Whitehorse) downed Prince Edward Island’s Tyler Smith (Cornwall) 10-3, Nova Scotia’s Stuart Thompson (Halifax) got by Northern Ontario’s Matthew Roberts (Thunder Bay) 7-3, Manitoba’s Matt Dunstone (Winnipeg) was a 12-0 winner over the Northwest Territories’ Daniel Murray (Yellowknife) and New Brunswick’s Josh Barry (Fredericton) knocked off Newfoundland/Labrador’s Adam Boland (Gander) 10-6. In the other women’s openers, B.C.’s Corryn Brown (Kamloops) beat Saskatchewan’s Jessica Hanson (Saskatoon) 7-5, Newfoundland/Labrador’s Carolyn Suley (St. John’s) got by New Brunswick’s Jessica Daigle (Fredericton) 7-5, Manitoba’s Shannon Birchard (Winnipeg) was a 9-6 winner over Northern Ontario’s Tirzah Keffer (Thunder Bay) and Ontario’s Jamie Sinclair (Manotick) beat Carina McKay-Saturnino of the Northwest Territories (Inuvik) 18-1. The 2014 M&M Meat Shops Canadian Juniors continue on Saturday with Draw 2, scheduled for 6:30 p.m. MST. With 14 teams in each gender (representing each of the 10 provinces in addition to Northern Ontario, the Northwest Territories, Yukon and Nunavut), a new format will be used this year that will see the field split into two seven-team pools, with seeding based on win-loss records at the Canadian Juniors over the past three years. Teams will play a round robin within their pool, leading to a championship pool beginning on Wednesday, which will then lead to the weekend playoffs. Teams that don’t qualify for the championship pool will play a seeding pool to determine rankings for the 2014 Canadian Juniors in Liverpool, N.S. Meantime, non-playoff teams will participate in a mixed doubles competition. Other information: • For ticket and other event information, visit www.curling.ca/championships/juniors/. • Live scoring is available at www.curling.ca/championships/juniors/scores-and-standings/. • TSN/RDS, the official broadcaster of the CCA’s Season of Champions, will provide live coverage across Canada of the men’s and women’s finals from the CNRL Arena 2. The men’s final is scheduled for 5 p.m. MT Saturday, Feb. 9, while the women’s final goes Sunday, Feb. 10, at 5 p.m. MT as well. • Media inquiries can be directed to: Al Cameron Director, Communication and Media Relations Canadian Curling Association 403-463-5500 [email protected] www.curling.ca