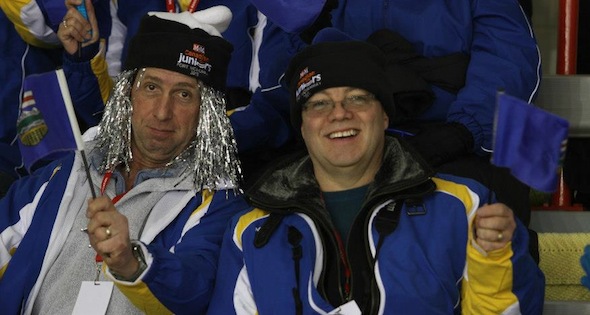 Even as one of the favourites in the women’s field, representing a traditional powerhouse province, the 18-year-old Birchard and her Winnipeg team (third Nicole Sigvaldson, second Sheyna Andries, lead Mariah Mondor, coach Bruce Birchard) know nothing will be gift-wrapped for them. Thus, the importance attached to a fast start in the revamped format, which sees teams playing six round-robin games (there are two seven-team pools), with the top four finishers in each pool moving onto the championship round-robin beginning on Wednesday. Birchard and Co. are definitely off to that fast start, improving to 3-0 on Sunday with a 9-2 win over Quebec’s Sarah Dumais (St-Romuald). “You can’t really afford many losses in this short round-robin,” said Birchard, who lost last year’s gold-medal game to Alberta’s Jocelyn Peterman in Napanee, Ont. “You have to have save any bad games for maybe later in the week (after you’ve qualified for the championship round-robin). It’s definitely encouraging that we’ve had a good start.” As for the pressure that comes with being a podium finisher a year ago, and, oh yes, representing Manitoba? “I think about it a little but I definitely don’t let it get to me,” said Birchard. “Last year is in the past; the experience definitely helps us, but I think we just have to play our best and forget about any kind of external pressure.” 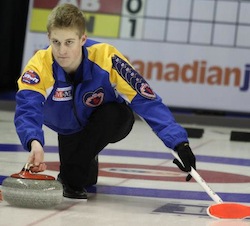 On the men’s side, Alberta’s Thomas Scoffin knows a thing or two about pressure. He’s skipping the host team after six previous Canadian Juniors appearances as the skip of the Yukon team, and two of his new Alberta teammates, twin front-enders Landon Bucholz and Bryce Bucholz (the Edmonton team is rounded out by third Dylan Gousseau), were teammates with skip Brendan Bottcher last year on a squad that won both the Canadian and world junior championships. Scoffin’s first taste of being one of the favourites got off to a tough start on Saturday as Alberta gave up a 10th-end deuce to lose 5-4 to Ontario’s Aaron Squires (St. Thomas). On Sunday, the Albertans came back strongly with an 8-4 win over Saskatchewan’s Brady Scharback (Saskatoon). “We knew we had it tough coming in,” said Scoffin, a bronze-medallist representing Canada at the 2012 Youth Olympics in Innsbruck, Austria. “Ontario-Saskatchewan is definitely a tough start — a heartbreaker yesterday but this was a good bounceback; I’m really happy with how we played this afternoon.” Like Birchard, Scoffin knew there would be certain expectations placed on his team. “With the blue and yellow, there’s a little bit of added pressure,” he admitted. “Obviously, with the credentials within our team, we have a lot of potential and skill. But at the same time, it’s a good pressure. We love that, and we’re looking forward to keeping playing with it.” In the other men’s games on Sunday afternoon, Prince Edward Island’s Tyler Smith (Cornwall) picked up his first win, a 9-5 triumph over Nunavut’s David Kakuktinniq; B.C.’s Tyler Klymchuk (Langley/Victoria) remained unbeaten with a 6-5 extra-end win over Ontario; and Northern Ontario’s Matthew Roberts (Thunder Bay) picked up a 9-3 win over Daniel Murray of the Northwest Territories (Yellowknife). In women’s play, Ontario’s Jamie Sinclair (Manotick) improved to 3-0 with a 9-7 win over Northern Ontario’s Tirzah Keffer (Thunder Bay); Newfoundland/Labrador’s Carolyn Suley (St. John’s) toppled Sadie Pinksen of Nunavut (Iqaluit) 10-3; B.C.’s Corryn Brown (Kamloops) turned back Sarah Koltun of the Yukon (Whitehorse) 10-7; Alberta’s Karynn Flory (Edmonton) was a 7-5 winner over Saskatchewan’s Jessica Hanson (Saskatoon); and Carina McKay-Saturnino of the Northwest Territories (Inuvik) knocked off Mary Myketyn-Driscoll of Nova Scotia (Truro) 8-3. The 2013 M&M Meat Shops Canadian Juniors continue on Sunday with another draws beginning at 6 p.m. (all times MST). Live scoring is available at www.curling.ca/championships/juniors/scores-and-standings/standings-2013-juniors/. With 14 teams in each gender (representing each of the 10 provinces in addition to Northern Ontario, the Northwest Territories, Yukon and Nunavut), a new format is being used this year that has the field split into two seven-team pools, with seeding based on win-loss records at the Canadian Juniors over the past three years. Teams will play a round robin within their pool, leading to a championship pool beginning on Wednesday, which will then lead to the weekend playoffs. Teams that don’t qualify for the championship pool will play a seeding pool to determine rankings for the 2014 Canadian Juniors in Liverpool, N.S. Meantime, non-playoff teams will participate in a mixed doubles competition.