FORT McMURRAY, Alta. — New Brunswick skip Josh Barry believes the best is yet to come for his team from Fredericton. 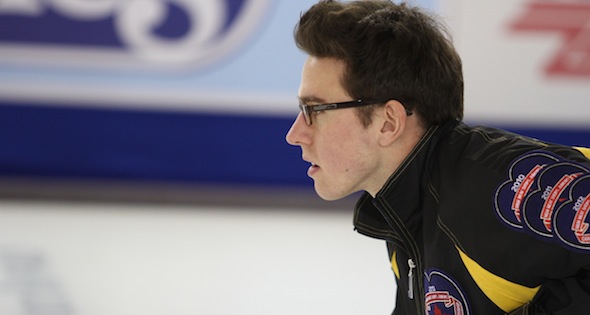 The 20-year-old biology student at the University of New Brunswick at Fredericton improved his record to 3-0 on Sunday night at the M&M Meat Shops Canadian Junior Men’s and Women’s Curling Championships, posting a 9-6 win over Quebec’s Félix Asselin (Montreal) at the Suncor Community Leisure Centre. With the win, Barry’s Fredericton-based quartet (rounded out by third Rene Comeau, second Spencer Watts, lead Andrew O’Dell and coach Larry McCormack) remains the lone unbeaten team in its seven-team round-robin pool, despite the skip (by his own admission) not being on top of his game. “I think we’re in a pretty good position,” said Barry, who’s playing in his fourth Canadian Juniors. “Our game’s not necessarily where we want it, exactly; I’ve been struggling a little bit, and thank goodness my team has kind of been holding me up. Hopefully we can take it from there and get a little better as the week goes on.” 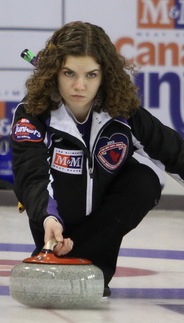 Even with the comfort of a perfect 3-0 start, Barry said his team can’t let up in its final three round-robin games of the preliminary round (the top four teams from each round-robin pool will move onto the championship round-robin, beginning on Wednesday). “You can’t take any game for granted,” said Barry. “I’ve played hundreds of games against younger kids and been beaten way more times than I should have been. We just have to play our game and take it step by step.” On the women’s side, the Yukon’s Sarah Koltun, who’s skipping in her record seventh consecutive Canadian Juniors, continued her solid early form, posting a 6-5 win over New Brunswick’s Jessica Daigle (Fredericton), nailing down the victory with a raise takeout on her final delivery of the game. The win lifted the Yukon team to 2-1 and in solid shape to make the championship round. “I have a lot of confidence in my teammates,” said Koltun, who’s backed up by third Chelsea Duncan, second Patty Wallingham, lead Jenna Duncan and coach Lindsay Moldowan. “My sweepers are excellent ands Chelsea is good at calling line, we’ve been together forever so we have a lot of trust in each other. I know they believe that I can make the shots, so I know that I have to believe it, too.” Koltun’s best previous result was a 6-6 finish in 2011 in Calgary, but she has higher ambitions here in Northern Alberta. “We think that just because we’re from the Yukon shouldn’t mean that we’re any less skilled than the other teams,” said Koltun, 19. “We like to show that off when we’re here, and that we can compete as well as the other guys. The Yukon is here. And we’re not going away.” 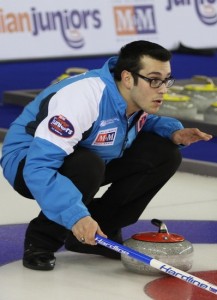 In other men’s games on Sunday evening, B.C.’s Tyler Klymchuk (Langley/Victoria) improved to 3-0 with an 11-7 win over the Yukon’s Will Mahoney (Whitehorse); Nova Scotia’s Stuart Thompson (Halifax) was an 11-5 winner over Newfoundland/Labrador’s Adam Boland (Gander); Manitoba’s Matt Dunstone (Winnipeg) turned back Northern Ontario’s Matthew Roberts (Thunder Bay) 10-4; and Alberta’s Thomas Scoffin (Edmonton) beat Nunavut’s David Kakuktinniq (Rankin Inlet) 22-2. The other women’s results: Northern Ontario’s Tirzah Keffer (Thunder Bay) toppled Carina McKay-Saturnino of the Northwest Territories (Inuvik) 13-2; B.C.’s Corryn Brown (Kamloops) turned back Newfoundland/Labrador’s Carolyn Suley (St. John’s) 7-5; P.E.I.’s Veronica Smith (Cornwall) shaded Quebec’s Sarah Dumais (St-Romuald) 6-5; and Saskatchewan’s Jessica Hanson (Saskatoon) was a 21-1 winner over Nunavut’s Sadie Pinksen (Iqaluit). The 2013 M&M Meat Shops Canadian Juniors continue on Monday with three draws, set for 9 a.m. (all times MST), 2 p.m. and 7 p.m. The early draw will feature a showdown between unbeaten women’s teams Shannon Birchard of Manitoba and Jamie Sinclair of Ontario. Live scoring is available at www.curling.ca/championships/juniors/scores-and-standings/standings-2013-juniors/. With 14 teams in each gender (representing each of the 10 provinces in addition to Northern Ontario, the Northwest Territories, Yukon and Nunavut), a new format is being used this year that has the field split into two seven-team pools, with seeding based on win-loss records at the Canadian Juniors over the past three years. Teams will play a round robin within their pool, leading to a championship pool beginning on Wednesday, which will then lead to the weekend playoffs. Teams that don’t qualify for the championship pool will play a seeding pool to determine rankings for the 2014 Canadian Juniors in Liverpool, N.S. Meantime, non-playoff teams will participate in a mixed doubles competition.