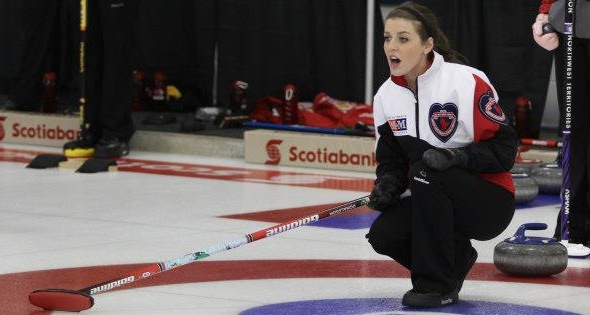 Both Ontario entries posted perfect 2-0 starts on Saturday at the Suncor Community Leisure Centre to enter Day 2 of the national championship co-leading their respective round-robin pools. Jamie Sinclair’s team from Manotick (third Holly Donaldson, second Katelyn Wasylkiw, lead Erin Jenkins, coach Graham Sinclair) opened the day with an 18-1 win over Carina McKay-Saturnino of the Northwest Territories (Inuvik) before completing a perfect day with a 10-2 win over Nova Scotia’s Mary Myketyn-Driscoll (Truro). “It’s been pretty good; we’re definitely happy with it,” said the 20-year-old Sinclair, who posted a 7-5 record at the 2012 Canadian Juniors in Napanee, Ont. “Last year definitely helped us. We feel comfortable, having been here before. Our goal coming into the week was to start off on a good note, go in confident and kind of intimidating people, I guess you could say, because of our experience.” 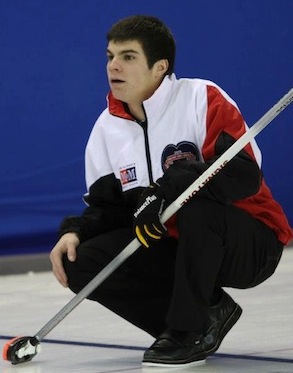 On the men’s side, Aaron Squires’ St. Thomas foursome (third Jason Camm, who throws last rock, second David Easter, lead Curtis Easter, coach Tom Devaney), faced a stiff assignment in its junior nationals debut, taking on a host Alberta team that features two players from last year’s world junior championship gold-medal team. But Squires and Co. were able to beat Alberta’s Thomas Scoffin (Edmonton) 6-5, and then turned back Mitch Young of the Yukon (Whitehorse) 9-5 in the evening draw. “We knew we’d have it tough against Alberta, but we knew if we played our game we’d have every chance of winning that game as they would,” said Squires. “It was a huge confidence boost; to win that one was awesome, and then to come out and win our second one, we feel great with that start.” In the other evening women’s games, Quebec’s Sarah Dumain (St-Romuald) turned back Carina McKay-Saturnino of the Northwest Territories (Inuvik) 9-3; Manitoba’s Shannon Birchard (Winnipeg) improved to 2-0 with an 8-6 win over Veronica Smith of P.E.I. (Cornwall); the Yukon’s Sarah Koltun (Whitehorse), in her seventh junior nationals, was a 20-0 winner over Nunavut’s Sadie Pinksen (Iqaluit); and New Brunswick’s Jessica Daigle (Fredericton) shaded B.C.’s Corryn Brown (Kamloops) 7-6. In the late men’s games, Quebec’s Félix Asselin (Montreal) edged the Northwest Territories’ Daniel Murray (Yellowknife) 7-6; New Brunswick’s Josh Barry (Fredericton) was an 11-4 winner over Nova Scotia’s Stuart Thompson (Halifax); Newfoundland/Labrador’s Adam Boland (Gander) knocked off Manitoba’s Matt Dunstone (Winnipeg) 7-4; B.C.’s Tyler Klymchuk (Langley/Victoria) downed David Kakuktinniq of Nunavut (Rankin Inlet) 11-2; and Brady Scharback of Saskatchewan (Saskatoon) completed a 2-0 opening day with a 7-6 win over P.E.I.’s Tyler Smith (Cornwall). The 2013 M&M Meat Shops Canadian Juniors continue on Sunday with draws at 1 p.m. and 6 p.m. (all times MST). Live scoring is available at www.curling.ca/championships/juniors/scores-and-standings/. 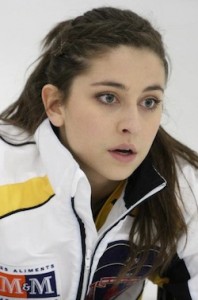 With 14 teams in each gender (representing each of the 10 provinces in addition to Northern Ontario, the Northwest Territories, Yukon and Nunavut), a new format is being used this year that has the field split into two seven-team pools, with seeding based on win-loss records at the Canadian Juniors over the past three years. Teams will play a round robin within their pool, leading to a championship pool beginning on Wednesday, which will then lead to the weekend playoffs. Teams that don’t qualify for the championship pool will play a seeding pool to determine rankings for the 2014 Canadian Juniors in Liverpool, N.S. Meantime, non-playoff teams will participate in a mixed doubles competition. • For ticket and other event information, visit www.curling.ca/championships/juniors/. • Live scoring is available at www.curling.ca/championships/juniors/scores-and-standings/. • TSN/RDS, the official broadcaster of the CCA’s Season of Champions, will provide live coverage across Canada of the men’s and women’s finals from the CNRL Arena 2. The men’s final is scheduled for 5 p.m. MT Saturday, Feb. 9, while the women’s final goes Sunday, Feb. 10, at 5 p.m. MT as well. • Media inquiries can be directed to: Al Cameron Director, Communication and Media Relations Canadian Curling Association 403-463-5500 [email protected] www.curling.ca