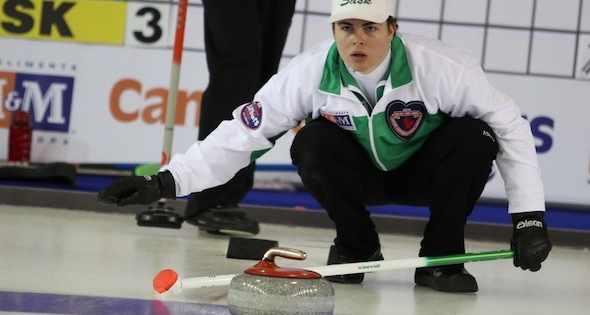 Scharback’s team from Saskatoon (rounded out by third Quinn Hersikorn, second Jacob Hersikorn, lead Brady Kendel and coach Laurie Burrows) knocked off previously unbeaten Tyler Klymchuk of B.C. (Langley/Victoria) 9-4 on Monday afternoon at the Suncor Community Leisure Centre. The result created a three-way tie for top spot in Pool A of the men’s competition, with Saskatchewan, B.C. and Ontario’s Aaron Squires (St. Thomas) all in the logjam. The top four teams in each seven-team pool will move onto the championship round-robin, beginning Wednesday. “We came out and we played excellent,” said Scharback. “We knew that we had to come out and get a win. You’re set for the top four for the next set of round-robin games, but if you want to be in the top three (playoff teams) at the end of the week, you really can’t have more than two losses. We need to come out and win the rest of our games.” Taking down Klymchuk’s B.C. squad was a step in the right direction, agreed Scharback. “It was really nice to do that,” he said. “My guys in front of me have been playing excellent this week. I’ve been kind of not making as many shots as I’d like, but that’s definitely the best I’ve played. But the other guys have been spot on all week.” In other men’s games, New Brunswick’s Josh Barry (Fredericton) remained the only men’s unbeaten team at 5-0 with a 9-2 win over Daniel Murray of the Northwest Territories (Yellowknife); Nova Scotia’s Stuart Thompson (Halifax) shaded Manitoba’s Matt Dunstone (Winnipeg) 4-3); Quebec’s Félix Asselin (Montreal) was a 6-4 victor over Newfoundland/Labrador’s Adam Boland (Gander); Ontario turned back P.E.I.’s Tyler Smith (Cornwall) 7-2; and the Yukon’s Will Mahoney (Whitehorse) beat Nunavut’s David Kakuktinniq (Rankin Inlet) 7-2. 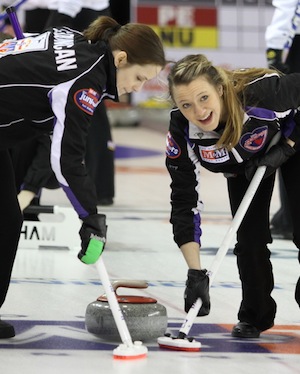 In women’s play, the Yukon’s Sarah Koltun improved her playoff hopes significantly with a 10-7 extra-end win over previously undefeated Karynn Flory of Alberta (Edmonton). The win left Koltun’s team from Whitehorse (third Chelsea Duncan, second Patty Wallingham, lead Jenna Duncan, coach Lindsay Moldowan) with a 3-1 record, tied with B.C.’s Corryn Brown (Kamloops) for first place in their pool; B.C. had the bye on Monday afternoon. “Not pretty. But it feels good to come out with a win,” said Koltun, who had a shot to win in the 10th end but was heavy with her draw. “We fought hard. We had a few little mistakes, but we were able to come back from them, so it feels good.” In other women’s games, Saskatchewan’s Jessica Hanson (Saskatoon) toppled Newfoundland/Labrador’s Carolyn Suley (St. John’s) 10-3; Nova Scotia’s Mary Myketyn-Driscoll (Truro) beat Quebec’s Sarah Dumais (St-Romuald) 10-5; and New Brunswick’s Jessica Daigle (Fredericton) defeated Nunavut’s Sadie Pinksen (Iqaluit) 21-1. The 2013 M&M Meat Shops Canadian Juniors continue on Monday with one more draw, set for 7 p.m. (all times MST). Live scoring is available at www.curling.ca/championships/juniors/scores-and-standings/standings-2013-juniors/. With 14 teams in each gender (representing each of the 10 provinces in addition to Northern Ontario, the Northwest Territories, Yukon and Nunavut), a new format is being used this year that has the field split into two seven-team pools, with seeding based on win-loss records at the Canadian Juniors over the past three years. Teams will play a round robin within their pool, with the top four teams from each pool advancing to a championship pool beginning on Wednesday, which will then lead to the weekend playoffs. Teams that don’t qualify for the championship pool will play a seeding pool to determine rankings for the 2014 Canadian Juniors in Liverpool, N.S. Meantime, non-playoff teams will participate in a mixed doubles competition.