FORT McMURRAY, Alta. — The kid got the better of the old man on Monday night in the Scoffin Bowl at the M&M Meat Shops Canadian Junior Men’s Curling Championships. 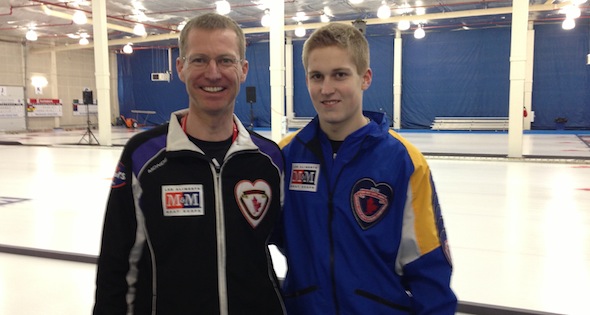 Yukon coach Wade Scoffin, left, faced off with his son Thomas, Team Alberta skip, on Monday night at the Canadian Juniors. Thomas got the best of his dad with a 6-4 win. (Photo, CCA/Al Cameron)

Thomas Scoffin’s Alberta team was pushed to the limit before finally holding off Will Mahoney’s stubborn foursome from the Yukon, coached by Thomas’s dad Wade Scoffin, 6-4 on Monday at the Suncor Community Leisure Centre. Thomas, 18, skipped Yukon teams at the last six Canadian Juniors before moving to Edmonton to pursue his post-secondary education at the University of Alberta. Monday night, not only was he facing off with his dad, he was also facing his ex-teammates Mahoney and Mitch Young, with whom he’d played in those six previous trips to the nationals. 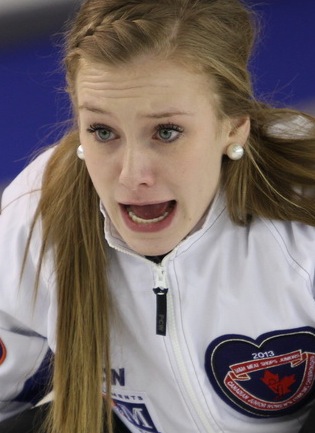 “That’s a different feeling; I’ve never done that before,” admitted Thomas, who along with third Dylan Gousseau, second Landon Bucholz, lead Bryce Bucholz and coach Rob Bucholz improved to 3-1. “It was definitely a little strange. Kudos to that team, they came to play today. They didn’t miss much; we really had to grind to get a win there. We’re glad we got that win and we’re looking forward to tomorrow now.” His old team did a wonderful job of hanging tough against the favoured Albertans, a fact the senior Scoffin was proud of afterwards. “We were looking forward to the game, most definitely,” said Wade. “I’m really glad that the guys I’m coaching right now performed really, really well, and took it right down to the last shot.” While Thomas has moved to a new province, his dad didn’t see a lot different in his son’s game. “His intensity, his goals, his determination are all the same,” said Wade. “He has great opportunities with new guys and the program in Edmonton is a great program that has given him a lot of support.” In other men’s games, Northern Ontario’s Matthew Roberts (Thunder Bay) was a 9-3 winner over Newfoundland/Labrador’s Adam Boland (Gander); Prince Edward Island’s Tyler Smith (Cornwall) turned back B.C.’s Tyler Klymchuk (Langley/Victoria) 5-4; and Ontario’s Aaron Squires (St. Thomas) took an extra end to beat Saskatchewan’s Brady Scharback (Saskatoon) 8-7. In women’s play, meanwhile, B.C.’s Corryn Brown took a major step toward qualifying for the championship round with an impressive 8-1 win over Alberta’s Karynn Flory. Brown’s Kamloops team (rounded out by third Erin Pincott, second Sam Fisher, lead Sydney Fraser and coach Ken Brown) improved to 4-1 with the victory, alone in top spot in the women’s A Pool — impressive stuff for a team making its debut at the Canadian Juniors. “I think the first days we still kind of had the rookie jitters going on, but definitely now we’re a lot more comfortable,” said Brown. “We’re getting used to the ice, getting used to the rocks, and we’ve definitely improved quite a bit.” Brown’s team is no stranger to big-game experience, however. This squad won gold at the 2011 Canada Winter Games in Halifax, and Brown was part of a Scoffin-skipped mixed team that won bronze at the 2012 Youth Winter Olympics in Austria. 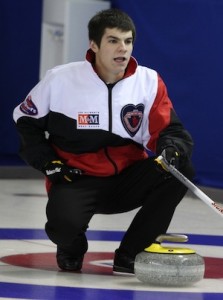 Still, she had no concrete expectations coming into Fort McMurray. “We were were hoping (for a good start), for sure, but by no means did we expect it,” she said. “This is all we can ask for, to be honest. Our first goal was to make that next round; now we try to set our goals a little higher.” In other women’s games, Nova Scotia’s Mary Myketyn-Driscoll (Truro) beat Northern Ontario’s Tirzah Keffer (Thunder Bay) 11-1; Carina McKay-Saturnino of the Northwest Territories (Inuvik) shaded Prince Edward Island’s Veronica Smith (Cornwall) 7-6; New Brunswick’s Jessica Daigle (Fredericton) held off Saskatchewan’s Jessica Hanson (Saskatoon) 9-6; the Yukon’s Sarah Koltun (Whitehorse) beat Newfoundland/Labrador’s Carolyn Suley (St. John’s) 7-5 in an extra end; and Ontario’s Jamie Sinclair (Manotick) stole singles in the 10th and 11th ends for a 7-6 win over Quebec’s Sarah Dumais (St-Romuald). The 2013 M&M Meat Shops Canadian Juniors continue on Tuesday with a pair of draws, at 1 p.m. (all times MST) and 6 p.m. Live scoring and updated standings are available at www.curling.ca/championships/juniors/scores-and-standings/standings-2013-juniors/. With 14 teams in each gender (representing each of the 10 provinces in addition to Northern Ontario, the Northwest Territories, Yukon and Nunavut), a new format is being used this year that has the field split into two seven-team pools, with seeding based on win-loss records at the Canadian Juniors over the past three years. Teams will play a round robin within their pool, with the top four teams from each pool advancing to a championship pool beginning on Wednesday, which will then lead to the weekend playoffs. Teams that don’t qualify for the championship pool will play a seeding pool to determine rankings for the 2014 Canadian Juniors in Liverpool, N.S. Meantime, non-playoff teams will participate in a mixed doubles competition.