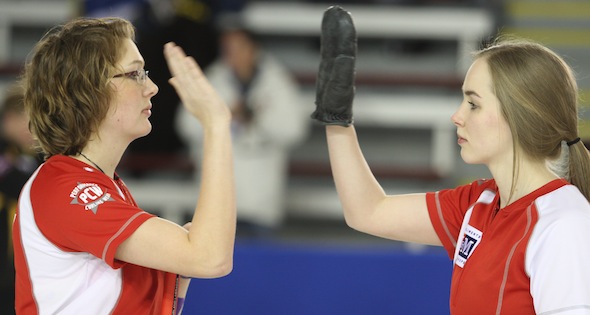 Alberta’s Karynn Flory (Edmonton) was the official home team, while Newfoundland/Labrador’s Carolyn Suley (St. John’s) was the unofficial host team, considering the large number of Newfoundland/Labrador transplants living in Fort McMurray. In a crucial contest to decide positioning for the championship round-robin phase of the competition, which begins Wednesday, it was Suley (backed up by third Amanada Rumboldt, second Meryn Avery, lead Nicole Noseworthy and coach Mark Noseworthy) recording a 9-5 victory. With the win, Newfoundland/Labrador improved to 3-3, and is assured of at last a tiebreaker to move into the championship round. The top four teams from each of the two seven-team pools move into the championship round. “We had a couple rough games early; we weren’t getting the shots we wanted to make,” said Suley. “But today, we knew it was a must-win and we said, ‘We have to take them on. They’re Alberta, they’re the big name, but we’re Newfoundland, we can take them.’ We went out there to play; we went out there to win.” Suley said the support from the local Newfoundland/Labrador community has been heartwarming. “I have family up here and we’ve had people come up to us for autographs, saying that they’re supporting us,” she said. “My aunt lives here and a couple of cousins, and they’re all out to support us. It’s a great feeling to have that support. Having those people int he stands seeing what you do with your life is really exciting.” In the other women’s games, Quebec’s Sarah Dumais (St-Romuald) needed an extra end to defeat Northern Ontario’s Tirzah Keffer (Thunder Bay) 6-5; Nova Scotia’s Mary Myketyn-Driscoll (Truro) was a 9-4 winner over Prince Edward Island’s Veronica Smith (Cornwall); Manitoba’s Shannon Birchard (Winnipeg) remained the lone unbeaten women’s team (5-0) with an 8-3 win over the Northwest Territories’ Carina McKay-Saturnino (Inuvik); and B.C.’s Corryn Brown (Kamloops) beat Nunavut’s Sadie Pinksen (Iqaluit) 24-1. B.C. and the Yukon’s Sarah Koltun (4-1, Whitehorse) have locked up Pool A berths in the eight-team championship round, while in Pool B, Manitoba, Ontario’s Jamie Sinclair (4-1, Manotick) and Nova Scotia have clinched Pool B berths. There will be a women’s tiebreaker round later tonight beginning at 9 p.m. (all times MST) and another at 8 a.m. on Wednesday; the matchups won’t be determined until after the 6 p.m. draw. 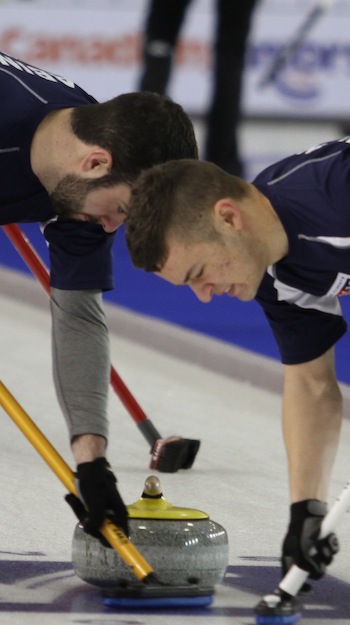 On the men’s side, Nova Scotia’s Stuart Thompson (Halifax) picked up a victory that ensured there would be no tiebreakers to determine the eight participants in the championship round. Thompson, whose team is rounded out by third Scott Babin, second Luke Saunders, lead Alex MacNeil and coach Kevin Patterson, shaded Quebec’s Félix Asselin (Montreal) 5-3 to clinch a spot in the final eight. It was Nova Scotia’s third straight win since losing in their second game of the Canadian Juniors over the weekend. “I think after the loss, we decided that pretty much every game was a must-win to stay near the top and have a chance at the end,” said Thompson, whose team improved to 4-1. “We’ve changed our strategy a little bit, playing a little more defensively because we just weren’t figuring out the ice. But I think we have a better hang of it now and every time we come out, it’s gone a lot better.” Quebec (2-3) still has a chance to advance to the final eight; Asselin’s squad takes on Northern Ontario’s Matthew Roberts (Thunder Bay) at 6 p.m., with the winner moving on. The six teams in each gender that don’t make the championship round will continue to play round-robin games against each other to decide the seedings for next year’s M&M Meat Shops Canadian Juniors in Liverpool, N.S. In the other men’s games, Saskatchewan’s Brady Scharback (Saskatoon) turned back the Yukon’s Will Mahoney (Whitehorse) 7-3; Newfoundland/Labrador’s Adam Boland defeated Daniel Murray of the Northwest Territories (Yellowknife) 8-3; and Alberta’s Thomas Scoffin (Edmonton) doubled Prince Edward Island’s Tyler Smith (Cornwall) 8-4. New Brunswick’s Josh Barry (Fredericton), Ontario’s Aaron Squires (St. Thomas), Alberta, Nova Scotia, Saskatchewan, B.C.’s Tyler Klymchuk (Langley/Victoria), Manitoba’s Matt Dunstone (Winnipeg) and the Quebec-Northern Ontario winner will comprise the men’s championship round-robin. The 2013 M&M Meat Shops Canadian Juniors continue on Tuesday with one more draw, at 6 p.m. (all times MST). Live scoring and updated standings are available at www.curling.ca/championships/juniors/scores-and-standings/standings-2013-juniors/. The top three teams after the championship round robin concludes on Friday will qualify for the playoffs; the first-place teams will move onto the final, while the second- and third-place teams will meet in the semifinals. TSN/RDS, the official broadcaster of the CCA’s Season of Champions, will provide live coverage across Canada of the men’s and women’s finals from the CNRL Arena 2. The men’s final is scheduled for 5 p.m. MT Saturday, Feb. 9, while the women’s final goes Sunday, Feb. 10, at 5 p.m. MT as well.