B.C. women salvage a victory at the Canadian Juniors

FORT McMURRAY, Alta. — B.C. skip Corryn Brown didn’t get to the championship round of the 2013 M&M Meat Shops Canadian Junior Men’s and Women’s Curling Championships without a few fortunate wins along the way. 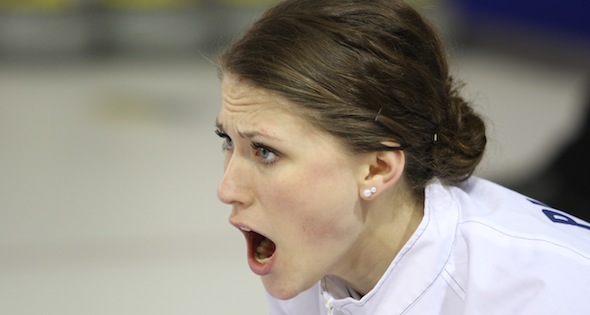 B.C. third Erin Pincott urges on her teammates during action at the 2013 Canadian Juniors in Fort McMurray. (Photo, LuLu Photography)

By her own admission, she got another of them on Wednesday afternoon at the Suncor Community Leisure Centre. In her opening game of the championship pool round robin, Brown took advantage of an ill-timed miss from Quebec skip Sarah Dumais (St-Romuald) in the 10th end to make an open hit to score four for a 10-8 victory. With the win, Brown’s team from Kamloops (third Erin Pincott, second Sam Fisher, lead Sydney Fraser, coach Ken Brown) improved its overall record to 6-1 (records from the preliminary round carry over). “That team (Quebec) deserved to win that one,” said Brown. “We didn’t. The way we played, it was totally their game, but we came out on top. We just weren’t getting our shots in the right spots, ever. We were really fortunate.” But, she agreed, no team wins Canadian championships without a few lucky victories, and Wednesday’s certainly fit that description. “We have to take it for what it is,” said Brown. “We just have to be sharper next game and win it outright; we can’t rely on luck. We have to rely more on skill now.” Quebec dropped to 2-5 with the loss. In other women’s championship round games, Manitoba’s Shannon Birchard (Winnipeg) remained unbeaten at 7-0 with an 8-7 win over the Yukon’s Sarah Koltun (4-3, Whitehorse); Ontario’s Jamie Sinclair (6-1, Manotick) kept pace with the leaders with a 9-8 win over New Brunswick’s Jessica Daigle (3-4, Fredericton); and Saskatchewan’s Jessica Hanson (4-3, Saskatoon), fresh off a tiebreaker win earlier in the day to stay alive, was an 11-3 winner over Nova Scotia’s Mary Myketyn-Driscoll (3-4, Truro). 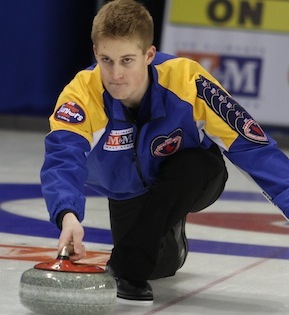 The men’s championship round also opened on Wednesday, with two of the top teams from the first round, Alberta’s Thomas Scoffin (Edmonton) and New Brunswick’s Josh Barry (Fredericton), going head to head. And it was the Alberta veteran — Scoffin is skipping in his seventh straight Canadian Juniors, but his first with Alberta after the previous six with the Yukon — who prevailed, rolling to a 10-4 victory. Alberta improved to 6-1 with the win while New Brunswick fell to 5-2. “Step one is complete, we made the championship round, and that was a battle of a game; it was a lot closer than the score indicated,” said Scoffin, whose team is rounded out by third Dylan Gousseau, second Landon Bucholz lead Bryce Bucholz and coach Rob Bucholz. “It’s good to come out with a win against these tough teams from the other pool. We’re looking forward to playing these games; they’re a lot more fun to play, and we’re getting closer to the end.” In other championship-round men’s play, Ontario’s Aaron Squires (6-1, St. Thomas) beat Quebec’s Félix Asselin (3-4, Montreal); Nova Scotia’s Stuart Thompson (6-1, Halifax) toppled Saskatchewan’s Brady Scharback (4-3, Saskatoon) 9-4; and Manitoba’s Matt Dunstone (5-2, Winnipeg), shaded B.C.’s Tyler Klymchuk (3-4, Langley/Victoria) 8-7 in an extra end. The top three teams after the championship round robins conclude on Friday will qualify for the playoffs; the first-place teams will move onto the final, while the second- and third-place teams will meet in the semifinals. The six teams in each gender that didn’t qualify for the championship round are playing a seeding round robin to determine final rankings for next year’s Canadian Juniors in Liverpool, N.S. In women’s seeding-pool play, Newfoundland/Labrador’s Carolyn Suley (4-3, St. John’s) edged P.E.I.’s Veronica Smith (1-6, Cornwall), while in men’s play, the Yukon’s Will Mahoney (3-4, Whitehorse) knocked off Daniel Murray of the Northwest Territories (0-7, Yellowknife) 14-2; and Northern Ontario’s Matthew Roberts (3-4, Thunder Bay) was an 8-5 winner over P.E.I.’s Tyler Smith (2-5, Cornwall). The Canadian Juniors continue on Wednesday with a draw beginning at 6 p.m. MST. Live scoring and updated standings are available at www.curling.ca/championships/juniors/scores-and-standings/standings-2013-juniors/. The updated draw, for both the championship pool and the seeding pool, is available at www.curling.ca/championships/juniors/draw-schedule/. TSN/RDS, the official broadcaster of the CCA’s Season of Champions, will provide live coverage across Canada of the men’s and women’s finals from the CNRL Arena 2. The men’s final is scheduled for 5 p.m. MT Saturday, Feb. 9, while the women’s final goes Sunday, Feb. 10, at 5 p.m. MT as well.