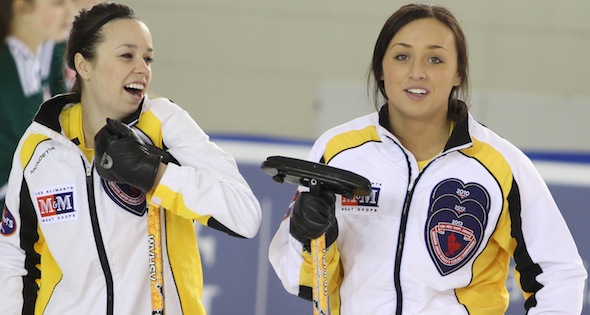 It was a happy day for Manitoba teammates Sheyna Andries, left, and Mariah Mondor at the 2013 Canadian Juniors in Fort McMurray. (Photo, courtesy LuLu Photography)

Birchard’s team from Winnipeg — third Nicole Sigvaldason, second Sheyna Andries, lead Mariah Mondor and coach Bruce Birchard — became the first at the 2013 Canadian Juniors to lock up a playoff spot, thanks to an 8-5 win over New Brunswick’s Jessica Daigle (Fredericton) on Wednesday night at the Suncor Community Leisure Centre. The win ran the Manitobans’ record here to 8-0, and increased their playdowns winning streak to 22, including zone and provincial events. “It’s a great feeling, and hopefully we can keep winning tomorrow and get to that first spot,” said Birchard, referring to the first-place bye to Sunday’s championship final. “It’s definitely nice to get that rest and to not have to play that extra game. It’s good to have the time off to relax because this week is very long and tiring.” The top three teams after the championship round robins conclude on Friday will qualify for the playoffs; the first-place teams in both genders will move onto the final (the men’s playoffs are Saturday, the women play Sunday), while the second- and third-place teams will meet in the semifinals. Birchard and Co. entered the Canadian Juniors as one of the favourites after winning a silver medal at last year’s championships in Napanee, Ont. “I think there’s always been confidence there; I think it’s increased a little bit now that we’ve been doing so well in the round robin,” she said. “Right now, I think we’re feeling pretty good.” Meanwhile, two other teams — B.C.’s Corynn Brown (Kamloops) and Ontario’s Jamie Sinclair (Manotick) — clinched at least playoff tiebreaker berths with victories on Wednesday night to increase their records to 7-1. B.C. defeated Nova Scotia’s Mary Myketyn-Driscoll (3-5, Truro) 8-2, while Ontario was an 8-7 victor over Saskatchewan’s Jessica Hanson (4-4, Saskatoon). The Yukon’s Sarah Koltun (Whitehorse) is the only other team with a shot at the playoffs. She kept her hopes alive of reaching a tiebreaker with a 13-2 win over Quebec’s Sarah Dumais (2-6, St-Romuald) to improve her record to 5-3. In men’s play, meanwhile, Nova Scotia’s Stuart Thompson (Halifax) has destiny in his hands leading into his final two round-robin games. Thompson’s team (third Scott Babin, second Luke Saunders, lead Alex MacNeil, coach Kevin Patterson) can clinch a berth in Saturday’s final by winning its final two games, thanks to a narrow 6-4 win on Wednesday night over B.C.’s Tyler Klymchuk (3-5, Langley/Victoria). 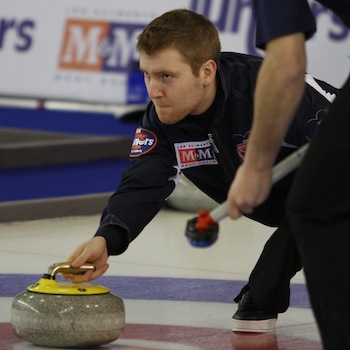 Nova Scotia skip Stuart Thompson and his team from Halifax are two wins away from a berth in Saturday’s gold-medal game. (Photo, courtesy LuLu Photography)

“It’s not fun for us as players to have nailbiters, but I guess the parents must like it,” said Thompson with a smile. “It was nice to be up one coming home, but we needed to make a beauty. It couldn’t have worked out better. It’s unbelievable that we came away with a win from that one. Just win three more, I guess.” Nova Scotia improved to 7-1, and will play the only other 7-1 team, skipped by Alberta’s Thomas Scoffin (Edmonton), on Thursday at 1 p.m. (all times MST), before closing out on Thursday night against Ontario’s Aaron Squires (6-2, St. Thomas). Alberta kept pace with a 7-4 win over Quebec’s Félix Asselin (3-5, Montreal). In the other championship round play, Manitoba’s Matt Dunstone (6-2, Winnipeg) made a stunning quadruple takeout with his last rock of the game to score three and  beat Ontario 8-6; and Saskatchewan’s Brady Scharback (5-3 Saskatoon) turned back New Brunswick’s Josh Barry (5-3, Fredericton) 6-5. The six teams in each gender that didn’t qualify for the championship round are playing a seeding round robin to determine final rankings for next year’s Canadian Juniors in Liverpool, N.S. In men’s seeding-pool play, Newfoundland/Labrador’s Adam Boland (Gander) beat Nunavut’s David Kakuktinniq (Rankin Inlet) 17-0; in women’s seeding games, Alberta’s Karynn Flory (Edmonton) toppled Carina McKay-Saturnino of the Northwest Territories (Inuvik) 12-3 while Northern Ontario’s Tirzah Keffer (Thunder Bay) was a 17-1 winner over Nunavut’s Sadie Pinksen (Iqaluit). The Canadian Juniors continue on Thursday with draws beginning at 1 p.m. and 6 p.m. (all times MST). Live scoring and updated standings are available at www.curling.ca/championships/juniors/scores-and-standings/standings-2013-juniors/. The updated draw, for both the championship pool and the seeding pool, is available at www.curling.ca/championships/juniors/draw-schedule/. TSN/RDS, the official broadcaster of the CCA’s Season of Champions, will provide live coverage across Canada of the men’s and women’s finals from the CNRL Arena 2. The men’s final is scheduled for 5 p.m. MT Saturday, Feb. 9, while the women’s final goes Sunday, Feb. 10, at 5 p.m. MT as well.