New Brunswick girls scrape into championship round at Canadian Juniors 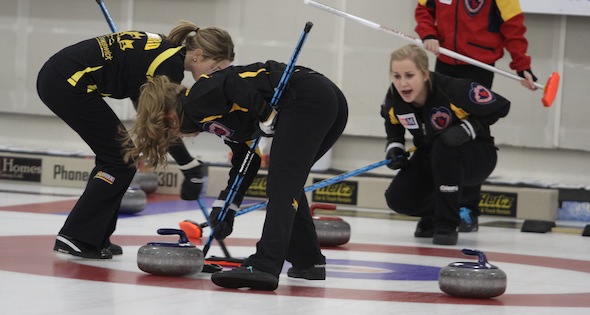 Jessica Daigle’s team from Fredericton (third Cathlia Ward, second Natalie Menzies, lead Katie Forward, coach Mark Ward) avenged a Tuesday night defeat to Alberta’s Karynn Flory (Edmonton) with an 8-3 victory in a Wednesday morning tiebreaker at the Suncor Community Leisure Centre. With the win, New Brunswick — along with fellow Wednesday tiebreaker winners Jessica Hanson of Saskatchewan (Saskatoon) and Sarah Dumais of Quebec (St-Romuald) — advances to the eight-team championship round-robin pool, from which the three playoff teams will be determined. Daigle and Co. have adopted the spirit of the wildly popular honey badger viral video, which pays tribute to the stubbornness and grit of the animal. “Honey badgers never quit, and that’s how we like to define ourselves,” said Daigle with a smile. “That’s how we like to go into games and that’s how we pursue the whole game.” 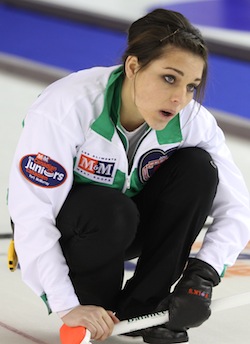 When it was determined that New Brunswick would face a rematch with Alberta on Wednesday morning, Daigle’s team was pleased with the prospects. “We thought it was even better,” said Daigle. “We thought that was our chance. We were coming in for a little bit of revenge this morning. We were in full honey badger mode. We’ve got a full week of honey badger left in us. We’re fired up, we’re ready to go.” The same can be said for Hanson’s Saskatchewan team, which followed up a must-win victory Tuesday night over the Yukon’s Sarah Koltun (Whitehorse) with a 10-7 tiebreaker win over Newfoundland/Labrador’s Carolyn Suley (St. John’s). “It happened at provincials, too, and that’s when we threw our best,” said Hanson. “Every game now is back against the wall, but we don’t mind playing like that. If we roll through this with four wins, that’s how you want to go into the top three, anyways. So you might as well have your backs to the wall.” In the other morning tiebreaker, Quebec was a 10-5 winner over the Northwest Territories’ Carina McKay-Saturnino. Wednesday morning’s winners join Manitoba’s Shannon Birchard (Winnipeg), Ontario’s Jamie Sinclair (Manotick), Nova Scotia’s Mary Myketyn-Driscoll (Truro), B.C.’s Corryn Brown (Kamloops) and the Yukon in the championship round, with their first-phase round-robin records carrying over. The four teams from Pool A (B.C., Yukon, New Brunswick, Saskatchewan) will play the four Pool B survivors (Manitoba, Ontario, Nova Scotia and Quebec). The top three teams based on combined records from the first round and championship round will advance to Sunday’s playoffs. 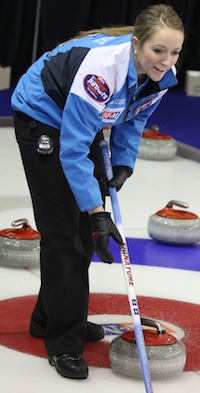 The teams that didn’t qualify for the championship round robin will play a seeding round robin to determine the rankings for the 2014 Canadian Juniors in Liverpool, N.S. The eight teams that moved onto the men’s championship round robin are: Ontario’s Aaron Squires (St. Thomas), Alberta’s Thomas Scoffin (Edmonton) and Saskatchewan’s Brady Scharback (Saskatoon) from Pool A; and B.C.’s Tyler Klymchuk (Langley/Victoria), New Brunswick’s Josh Barry (Fredericton), Nova Scotia’s Stuart Thompson (Halifax), Manitoba’s Matt Dunstone (Winnipeg) and Quebec’s Félix Asselin from Pool B. The championship and seeding round-robin draws begin with games at 1 p.m. (all times MST) and 6 p.m. Live scoring and updated standings are available at www.curling.ca/championships/juniors/scores-and-standings/standings-2013-juniors/. The updated draw, for both the championship pool and the seeding pool, is available at www.curling.ca/championships/juniors/draw-schedule/. The top three teams after the championship round robin concludes on Friday will qualify for the playoffs; the first-place teams will move onto the final, while the second- and third-place teams will meet in the semifinals. For ticket and other event information, visit www.curling.ca/championships/juniors/. TSN/RDS, the official broadcaster of the CCA’s Season of Champions, will provide live coverage across Canada of the men’s and women’s finals from the CNRL Arena 2. The men’s final is scheduled for 5 p.m. MT Saturday, Feb. 9, while the women’s final goes Sunday, Feb. 10, at 5 p.m. MT as well.