A pair of perfect records on the road to the Scotties

One sure way to secure a berth in the 2013 Scotties Tournament of Hearts – the Canadian Women’s Curling Championship – is just roll through the provincial playdowns without losing a game. While it’s a daunting task, to say the very least, that’s exactly the scenario that played out this year in both New Brunswick and Quebec. In New Brunswick, defending champion Andrea Crawford finished up the round robin without a loss and moved on to defeat Melissa Adams by a 13-6 score in the championship final. 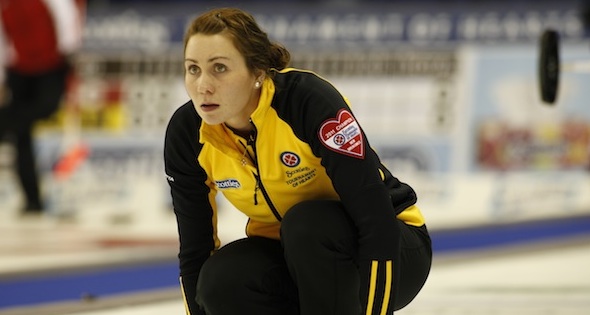 The competition, Jan. 30-Feb.3 at the Tri-County Complex in Fredericton Junction, added even more energy to the celebration at the Gage Golf and Curling Club. Crawford’s home club will also be sending the James Grattan team off to this year’s Tim Hortons Brier. Crawford, the 2005 Canadian Junior Women’s Curling Champion, will be wearing New Brunswick colours for a sixth time at the national championship – including the past five consecutive years. She returns to the Scotties with Rebecca Atkinson and Jodie DeSolla from last year’s squad, and newcomer Danielle Parsons at second. Allison Ross took her team on an identical route to the Scotties in the Quebec playdowns, held Jan.22-27 in Victoriaville. After seven wins in round-robin play, Ross earned a bye to the final where she defeated Ève Bélisle 11-4. The team will represent ‘la belle province’ in Kingston’s K-Rock Centre, Feb. 16-24 for the 2013 Scotties Tournament of Hearts. It marks the third trip to the national championship for Ross with teammates Audrée Dufresne, Brittany O’Rourke and Sasha Beauchamp making their debut. But, it will be a new experience for Ross who takes on the responsibility of calling the shots at the Scotties for the first time.  In 1999, she threw leads stones for Sherry Middaugh representing Ontario, and in 2005, she played third for Team Quebec skipped by Brenda Nicholls. “You Gotta Be There” in the K-Rock Centre when the best women’s teams in the country gather in Kingston for the 2013 Scotties Tournament of Hearts. Get your seats today by clicking here.