FORT McMURRAY, Alta. — Alberta’s men will be gunning for back-to-back gold medals, while B.C.’s women will be taking aim at that province’s first gold medal since 1987 at the 2013 M&M Meat Shops Canadian Junior Men’s and Women’s Curling Championships. 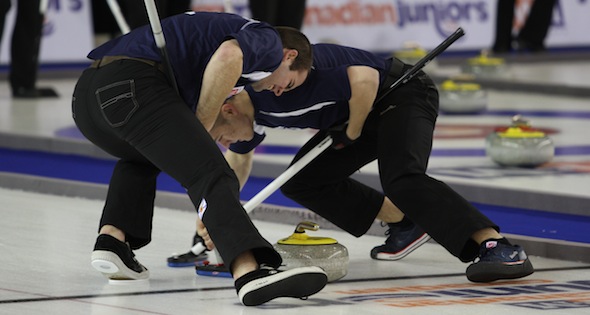 Alberta’s Thomas Scoffin (Edmonton) and B.C.’s Corryn Brown (Kamloops) each clinched byes to the gold-medal games with wins on Thursday night at the Suncor Community Leisure Centre, locking up first place in their respective championship round-robin pools. Interestingly, Scoffin and Brown were teammates in 2012 on the Canadian mixed team that won a bronze medal at the inaugural Youth Winter Olympic Games in Innsbruck, Austria. The men’s final is Saturday at 5 p.m. (all times MST) while the women’s final is Sunday, also at 5 p.m. As well, Nova Scotia’s Stuart Thompson (Halifax) wrapped up a berth in Saturday’s men’s semifinal (10:30 a.m.) with a victory on Thursday night. Scoffin’s team features two members — lead Bryce Bucholz and his twin brother Landon, who plays second — of last year’s Canadian and world junior championship team, so they have experience with what they’ll face here on Saturday (the team is rounded out by third Dylan Gousseau and coach Rob Bucholz). 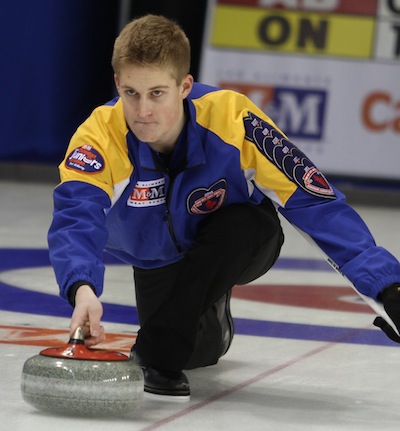 Alberta skip Thomas Scoffin is off to the final at the 2013 Canadian Juniors. (Photo, courtesy LuLu Photography)

“Saturday night, it’s really just about controlling your nerves,” said Landon, after Alberta improved to 9-1 with a 8-3 win over Manitoba’s Matt Dunstone (6-3, Winnipeg). “You’ve practised all year and all your life for it, so you just have to settle down and throw like you practise. I’m so pumped. It’s really exciting. That was a fun last game to play.” The Nova Scotians, meanwhile, locked up their playoff berth with a 7-5 win over Ontario’s Aaron Squires (St. Thomas). Nova Scotia improved to 8-2 with the victory, while Ontario dropped to 7-3. Ontario will play a tiebreaker for the third and final playoff spot on Friday at 1 p.m. against either Manitoba or Saskatchewan’s Brady Scharback (Saskatoon). Saskatchewan improved to 6-3 with a 7-4 win over Quebec’s Félix Asselin (3-6, Montreal) on Thursday night, and will play Manitoba to close out the championship round-robin draw on Friday morning, with the tiebreaker berth on the line. In the other men’s championship-round game, New Brunswick’s Josh Barry (6-4, Fredericton) was a 9-4 winner over B.C.’s Tyler Klymchuk (3-6, Langley/Victoria). On the women’s side, B.C. clinched its bye to the final in dramatic fashion when Brown made a double takeout to score three in the 10th end for a wild 11-10 win over Ontario’s Jamie Sinclair (7-2, Manotick). “I’m so proud of those girls,” said Brown, whose team (third Erin Pincott, second Sam Fisher, lead Sydney Fraser, coach Ken Brown) finished the championship round robin with a 9-1 record. “We had a couple of unfortunate ends and misses, but we made it through and got the three in the last end.” Now, the B.C. team has nearly three full days to prepare for Sunday’s gold-medal game. “I don’t really want to think about what’s at stake right now,” said Brown. “I just want to keep focused on what’s right now. We haven’t won anything yet and we haven’t lost anything. We just have to keep a level head.” 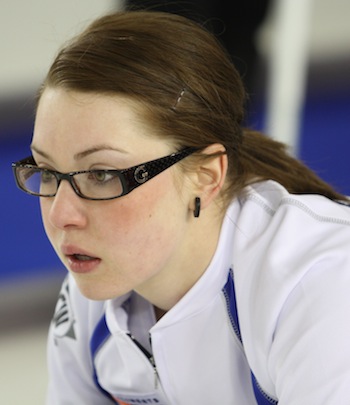 Manitoba’s Shannon Birchard saw her hopes of a bye to the final vanish with the stunning B.C. win, but the 2012 silver-medallist will play in the women’s semifinal Sunday at 10:30 a.m. thanks to her 9-4 win over Saskatchewan’s Jessica Hanson (4-5, Saskatoon). Manitoba finished with the same record as B.C. (9-1), but lost to B.C. earlier in the day to give Brown’s team first place. The third and final playoff berth will be decided on Friday morning; Ontario plays the Yukon’s Sarah Koltun (6-3, Whitehorse) The six teams in each gender that didn’t qualify for the championship round are playing a seeding round robin to determine final rankings for next year’s Canadian Juniors in Liverpool, N.S. In the women’s seeding games, Newfoundland/Labrador’s Carolyn Suley (5-3, St. John’s) turned back Northern Ontario’s Tirzah Keffer (3-5, Thunder Bay) 9-6; and Prince Edward Island’s Veronica Smith (2-6, Cornwall) squeaked past Alberta’s Karynn Flory (4-4, Edmonton) 7-6 in an extra end. On the men’s side, Northern Ontario’s Matthew Roberts (Thunder Bay) beat Nunavut’s David Kakuktinniq (0-8, Rankin Inlet) 9-1; and the Yukon’s Will Mahoney (5-4, Whitehorse) turned back Newfoundland/Labrador’s Adam Boland (3-5, Gander) 8-5. The Canadian Juniors continue on Friday with the final championship-round draw beginning at 8 a.m. (all times MST), with the men’s tiebreaker at 1 p.m. Live scoring and updated standings are available at www.curling.ca/championships/juniors/scores-and-standings/standings-2013-juniors/. The updated draw, for both the championship pool and the seeding pool, is available at www.curling.ca/championships/juniors/draw-schedule/. TSN/RDS, the official broadcaster of the CCA’s Season of Champions, will provide live coverage across Canada of the men’s and women’s finals from the CNRL Arena 2.