B.C. women, Alberta men off to playoffs at Canadian Juniors 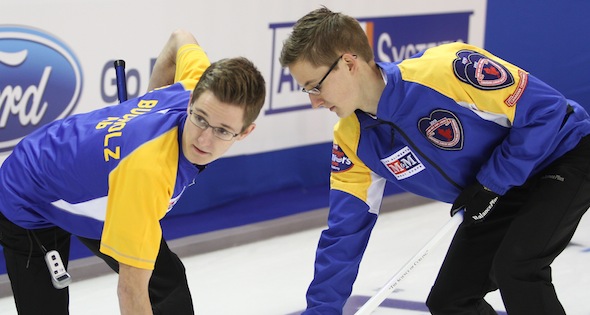 B.C.’s Corryn Brown (Kamloops) on the women’s side and Alberta’s Thomas Scoffin (Edmonton) on the men’s side both picked up victories on Thursday afternoon at the Suncor Community Leisure Centre to nail down minimum top-three finishes in their respective championship round-robin pools, meaning they will play in a weekend semifinal, at the very least. In clinching a berth, Brown’s team (rounded out by third Erin Pincott, second Sam Fisher, lead Sydney Fraser and coach Ken Brown) also managed to take down the last undefeated team in the field, Manitoba’s Shannon Birchard (Winnipeg). Brown took six in the seventh end en route to a 13-6 victory. It was a nice bounceback from a game 24 hours earlier when B.C. considered itself fortunate to beat Quebec’s Sarah Dumais (St-Romuald). “We definitely can’t rely on luck all the time, right? So this game, we relied a lot more on skill, to be honest,” said Brown. “We went out there and played our own game and did what we do best.” Brown’s team, which can clinch first place and a berth in Sunday’s gold-medal game with a victory tonight over Ontario’s Jamie Sinclair (7-1, Manotick), is one of the youngest here — all four players are 17 — so the skip admits to being “a little bit” surprised by its success in Fort McMurray. “We’re quite a bit younger than everybody else, but we always knew we had it in us,” she said. “We just had to keep having faith and keep playing hard.” Scoffin’s team, meanwhile, is surprising no one with its success. With two hold-overs from last year’s Canadian and world junior champions — front-enders (and identical twin brothers) Landon and Bryce Bucholz — the team has lived up to expectations. The latest example was a 7-5 win over Nova Scotia’s Stuart Thompson (Halifax) in a battle of 7-1 teams. “There was a lot riding on that game, and it definitely got the juices flowing,” said Scoffin, whose team also includes third Dylan Gousseau and coach Rob Bucholz. “It was a tight battle back and forth. We got a fortunate steal of two and that kind of cracked it open a little bit. But they never went away.” 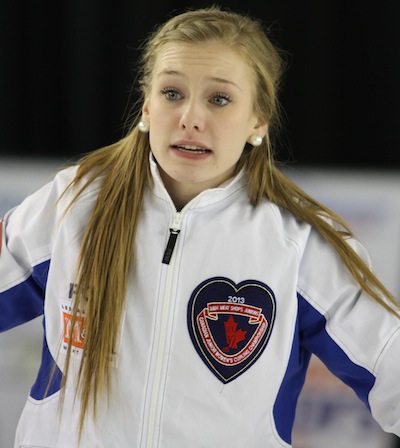 B.C. skip Corryn Brown and her team from Kamloops have clinched a playoff berth at the 2013 Canadian Juniors. (Photo, LuLu Photography)

Like the B.C. women, Alberta can lock up first place and a bye to Saturday’s men’s final with a victory tonight over Manitoba’s Matt Dunstone (6-2, Winnipeg). It’s been hard, admitted the skip, to keep his team from thinking ahead to Saturday’s playoff round. “It is a little tough, especially with the position we’re in,” admitted Scoffin. “We’ve been doing a very good job of taking it one game at a time, even one shot at a time. We’re focusing on the process, not the outcome, and I think we’re doing a good job if that.” In other women’s championship-round play, the Yukon’s Sarah Koltun (6-3, Whitehorse) stayed in playoff contention with a 10-3 win over Nova Scotia’s Mary Myketyn-Driscoll (3-6, Truro). The Yukon needs a win on Friday morning over Ontario, and for Ontario to lose later tonight against B.C. to force a tiebreaker. In the other championship-round women’s game, Quebec (3-6) was an 8-4 winner over New Brunswick’s Jessica Daigle (3-6, Fredericton). In the other men’s championship-round game, Ontario’s Aaron Squires (7-2, St. Thomas) shaded New Brunswick’s Josh Barry (5-4, Fredericton). The top three teams after the championship round robins conclude on Friday will qualify for the playoffs; the first-place teams in both genders will move onto the final (the men’s playoffs are Saturday, the women play Sunday), while the second- and third-place teams will meet in the semifinals. The six teams in each gender that didn’t qualify for the championship round are playing a seeding round robin to determine final rankings for next year’s Canadian Juniors in Liverpool, N.S. In men’s seeding games, the Yukon’s Will Mahoney (4-4, Whitehorse) beat Northern Ontario’s Matthew Roberts (3-5, Thunder Bay) 7-6; and P.E.I.’s Tyler Smith (3-5, Cornwall) was a 12-3 winner over Daniel Murray of the Northwest Territories (0-8, Yellowknife). In women’s seeding round play, Carina McKay-Saturnino of the Northwest Territories (3-5, Yellowknife) beat Sadie Pinksen of Nunavut (0-8, Iqaluit) 12-3. The Canadian Juniors continue on Thursday with a draw beginning at 6 p.m. (all times MST). Live scoring and updated standings are available at www.curling.ca/championships/juniors/scores-and-standings/standings-2013-juniors/. The updated draw, for both the championship pool and the seeding pool, is available at www.curling.ca/championships/juniors/draw-schedule/. TSN/RDS, the official broadcaster of the CCA’s Season of Champions, will provide live coverage across Canada of the men’s and women’s finals from the CNRL Arena 2. The men’s final is scheduled for 5 p.m. MT Saturday, Feb. 9, while the women’s final goes Sunday, Feb. 10, at 5 p.m. MT as well.