FORT McMURRAY, Alta. — Manitoba’s Matt Dunstone is on the verge of giving his province a first men’s gold medal at the M&M Meat Shops Canadian Junior Curling Championships in 11 years. 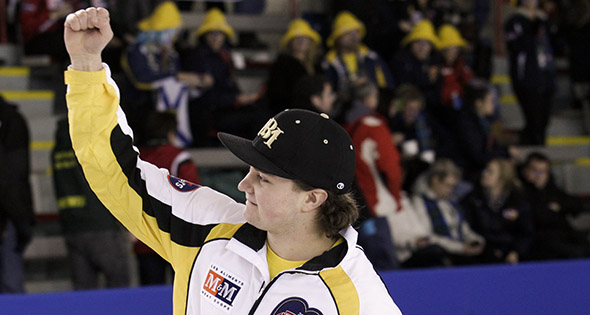 Dunstone’s Winnipeg team (third Colton Lott, second Daniel Grant, lead Brendan MacCuish, coach Scott Grant) earned a 9-4 win over Nova Scotia’s Stuart Thompson (Halifax) in the semifinal on Saturday at the Suncor Community Leisure Centre. With the victory, Manitoba advances to Saturday’s gold-medal game (5 p.m., all times MST, televised by TSN/RDS2) against Alberta’s Thomas Scoffin (Edmonton), with a trip to Sochi, Russia, for the world junior championships on the line. “At the beginning of the year, I wouldn’t have thought we’d be here,” said Dunstone, 17. “But it’s a pretty real feeling right now and we just hope to keep playing the same way we are right now.” Manitoba last won the Canadian Junior Men’s title in 2002 when Winnipeg’s David Hamblin captured the gold medal at Summerside, P.E.I. His team was able to take control of the semifinal by scoring three in the fourth end and three more in the eighth to end a solid run by the Nova Scotians. 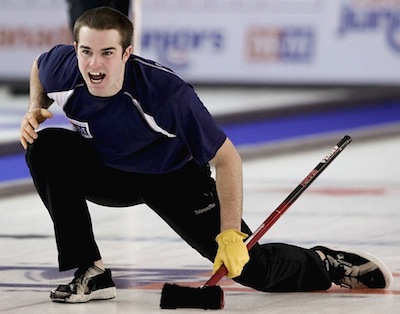 “The ends we gave up three, we were set up OK,” said Thompson, who was backed up by third Scott Babin, second Luke Saunders, lead Alex MacNeil and coach Kevin Patterson. “There were just a couple shots that kind of screwed us and basically handed them their threes.” But even with the comfortable lead, Dunstone said his team wasn’t comfortable until the game was over. “It’s never relaxing until the other team starts shaking your hand, right?” he said. “We knew that even up three playing nine, we had to finish strong. They could have come back on us like Ontario did on us yesterday (in a tiebreaker before Manitoba prevailed in the end). But we hung in there.” The women’s playoffs are set for Sunday, with Manitoba’s Shannon Birchard (Winnipeg) playing Ontario’s Jamie Sinclair (Manotick) at 10:30 a.m., with the winner playing B.C.’s Corryn Brown (Kamloops) for the gold medal at 5 p.m. (televised by TSN/RDS2). Live scoring is available at www.curling.ca/championships/juniors/scores-and-standings/standings-2013-juniors/.