Focus on Coaching: Gerry Richard and Jeanna Schraeder, a father-daughter team on the ice

Parents and coaches play important roles in the development of young curlers. While the coach provides technical know-how about strategy and skills, parents are often the fans behind the glass, making sure their child has the right equipment and a healthy snack before heading out on the ice. Working together, the team of coach and parent ensures the young curler is learning, developing, and having fun along the way. But sometimes those roles – coach and parent – fall to the same person. That’s especially true in curling, where many young athletes are introduced to the game through their parents’ involvement. 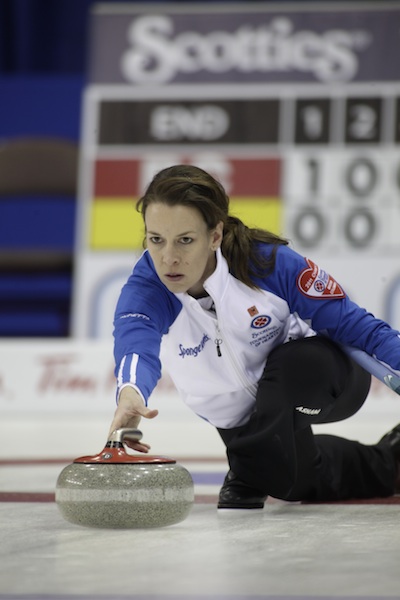 “The Kelowna Curling Club felt like my second home,” says Jeanna Schraeder, third on Kelly Scott’s team, which will represent British Columbia at the Scotties Tournament of Hearts starting Saturday Feb. 16, in Kingston, Ont. “I grew up with both my mother (Kerrylyn Richard) and father (Gerry Richard) being successful competitive curlers, so we spent a lot of time down at the rink. Kelowna Curling Club french fries and grilled cheese sandwiches will forever be remembered!” Richard, who played lead on the Rick Folk B.C. team that won the 1994 Labatt Brier and world men’s curling championship, remembers little Jeanna and her brother, Jeff, sitting behind the glass during competitions, or at the end of the sheet during practices. “I always said she would either love or hate this game when she had the chance to decide for herself,” says Richard. “Luckily she chose to love it.” For Dad, the coaching role started right away. “I started coaching both Jeanna and Jeff as soon as they were big enough to be on the ice,” says Richard, who has his Level 3 coaching certification and is a Consultant Coach for CurlBC this season. “For a number of years I was still playing competitively and coaching Jeanna and Jeff as well.” He coached Jeff at three Canadian junior championships, including a loss to John Morris in the 1999 final, as well as at the 2010 Brier, where the younger Richard skipped Team British Columbia. In Jeanna’s case, Richard started with an informal approach. “I would say I was always ready to offer her advice on the sport and I think she trusted me in this area,” he says about the early years. “The things they learn from spending this much time at the rink is invaluable. You think they aren’t paying attention to the game but they are still absorbing so many of the little things that take years to teach. Both of our kids were very good at finding an open sheet of ice and throwing rocks for hours.” Richard remembers Jeanna competing in one of her first events, the Jam-Can spiel in Kamloops. “They had to jump to get onto the benches between the sheets,” he says. “The competition was fierce and you could see the competitive fire in her at around nine years old.” Schraeder remembers her dad coaching her throughout her junior career, which started at age 13 when she played lead on the Marla Geiger (now Mallett) team, and extended into ladies competition with the highly successful Kelly Scott foursome. 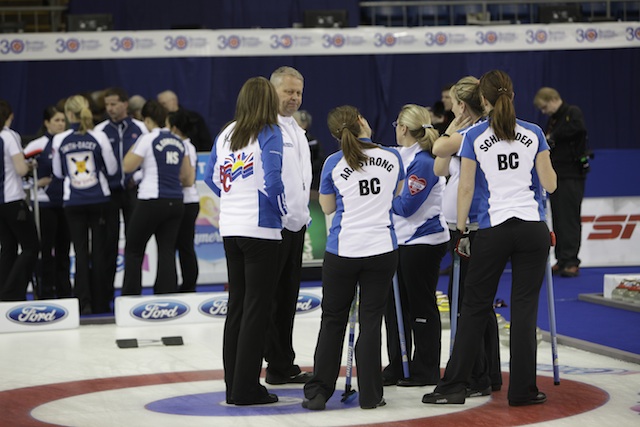 “When Kelly, Jeanna, Sasha (Carter) and Renee (Simons) formed the team, they were being coached by Bill MacKenzie, Kelly’s dad,” says Richard. “Bill had a great eye in the technical and mental areas of the game and is still used on occasion in this area. The team was looking for someone to help them with strategy and competitive development of the game.” So how does a parent wear two hats – dad and coach – in the pressurized atmosphere of high-performance, high-stakes competitive curling? “Funny, but it has been much easier than most people would imagine,” says Richard. “We both have the ability to take on our roles as coach/ athlete during curling time and then go back to father/daughter when we are done. I feel I treat Jeanna the same as the other members of the team and expect no more or less from her. The team always kids me, telling me I have four daughters on the team.” But that doesn’t mean it’s always easy. Schraeder is a highly successful competitive curler, and Richard does sometimes feel that the fact that she’s his daughter might keep him from giving her the praise she deserves. “I guess it’s just sub-consciously not wanting to show any favouritism toward her,” he says. For her part, Schraeder confesses to some challenges as well. “I sometimes question if he goes too easy on me just because I’m his daughter,” she says. “Does he hold things back just because I am who I am? I can’t speak for the other girls on the team, but I wonder at times if it can be more difficult to give feedback on either my performance or areas for me to work on.” But having her father as a coach is an advantage too, says Schraeder, because he knows exactly what to say to make her feel better when things are going badly. “If I’ve personally had a tough game, or we experienced a tough loss, he knows that he can just give me a wink, or a pat on the back,” she says. “That seemingly simple gesture from him to me, means so much. There doesn’t have to be words.” Watching your team – and your child – in competition isn’t always easy, especially when the results are disappointing, but Richard keeps it all in perspective. “I have seen Jeanna win two Scotties and a world championship as well as lose an Olympic trials final (in 2005),” he says. “As a coach and father you see the joys of winning as well as the hardships in losing. The losses are obviously much harder to take, but it is a part of learning this game.” 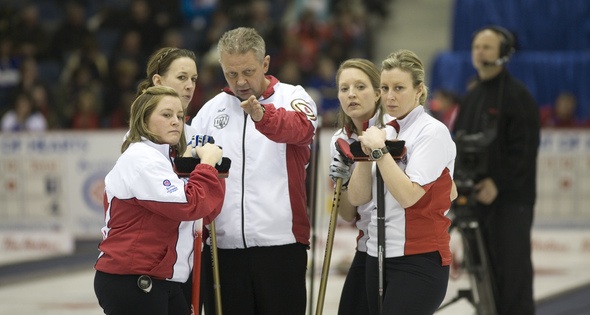 Watching his daughter grow from a junior curler to a world champion, sharing the journey in a game they both love, has naturally made him extremely proud. “I will always remember when we won our first Scotties in 2006 and giving Jeanna a hug and she said, ‘Dad, we did it,’ ” he says. “I would definitely say all of our experiences together in curling have made our relationship very strong.” Those benefits go two ways. “Having him as my coach has allowed me to stay very close to my dad over the years,” says Schraeder. “The amount of time that we spend together on the ice, practicing, travelling and competing means that our relationship continues to grow. It’s a pretty good perk to have!” This season, Richard has been working on another role as well. He’s been spending less time at the rink and more time on the home front – helping out with the care of Schraeder’s three young boys so she can commit to the competitive curling season. Coach Brent Giles, who has been travelling with the team this season, will accompany Team Scott to Kingston for the Scotties. “I think the key to coaching your children is to make sure both people understand their roles,” Richards says by way of advice to other parents facing the challenges – and benefits – of coaching a son or daughter. “You may have a few bumps along the way, but just stay consistent in your approach. Teach them to love the game first and you both will have many enjoyable years together.”