Canada’s best curlers will show off their individual shot-making skills for the 19th straight year in the Ford Hot Shots skills competition at the Scotties Tournament of Hearts in Kingston, Ont., and the Tim Hortons Brier, presented by Monsanto, in Edmonton. 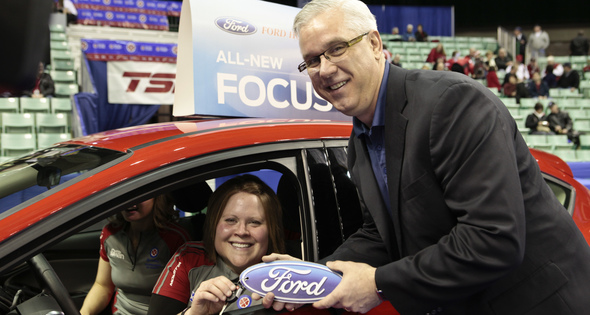 The annual competition sees curlers throw six different shots: Hit and Stay, Draw the Button, Draw the Port, The Raise, Hit and Roll and Double Takeout. Each shot is awarded points on a scale from 0-5 depending on the end result of the shot. Ford of Canada will provide the winner after four rounds of competition (preliminary, quarter-finals, semifinals, final) at both the Scotties and Brier with a two-year lease on a 2013 Ford Fusion SE 2.0L, AWD with EcoBoost, an approximate retail value of $14,000. This stunning new 2013 Ford Fusion features a 2.0L, turbocharged, direct injection EcoBoost engine that will give drivers maximum power and efficiency from each drop of fuel. Available Sync with MyFord Touch driver connect technology integrates the vehicle with the drivers’ digital world. Available Active Park Assist will help you parallel park with ease. The All-New Ford Fusion. It’s an entirely new idea of what a car can be. The second-place finisher will be presented with a cheque for $2,000, while the third-place finisher receives $1,000.