Nedohin leads the way in first round of Ford Hot Shots

Eight curlers are through to the next rounds of the Ford Hot Shots competition at the 2013 Scotties Tournament of Hearts, including last year’s winning skip, Heather Nedohin, who wears Team Canada colours this year. Nedohin, who scored 28 out of a possible 30 points in the preliminary round Friday afternoon at Kingston’s K-Rock Centre, will be joined in the next round by Sharon Cormier (NT/Y), Emma Miskew (ON) and Rachel Homan (ON), all of whom scored 22 points; Kaitlyn Lawes (MB) with 21 points; Allison Ross (QC) with 20 points; and Jill Officer (MB) and Sara Wazney (BC) with 19 points. 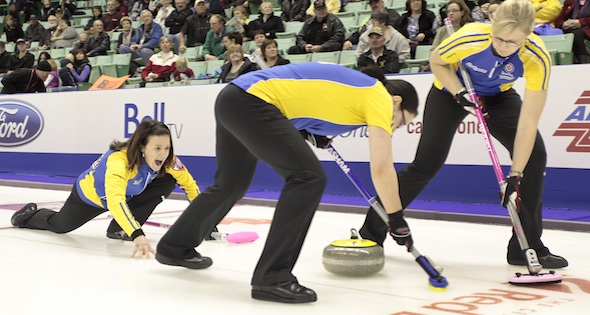 The annual competition sees curlers throw six different shots: Hit and Stay, Draw the Button, Draw the Port, The Raise, Hit and Roll and Double Takeout. Each shot is awarded points on a scale from 0-5 depending on the end result of the shot. Thanks to Ford of Canada, the winner after four rounds of competition (preliminary, quarter-finals, semifinals, final) will be presented with a two-year lease on a 2013 Ford Fusion SE 2.0L, AWD with EcoBoost, an approximate retail value of $14,000. The second-place finisher will be presented with a cheque for $2,000, while the third-place finisher receives $1,000. Playoffs (Final Eight, Final Four, Final) begin at noon on Saturday, Feb. 16, following the Opening Ceremonies. Since 1995, the Ford Hot Shots event has provided not only an exciting beginning to each championship but has proven to be an extremely popular competition for curlers and fans. Previous Ford Hot Shots winners at the Hearts are the Territories’ Kelli Turpin, British Columbia’s Sherry Fraser, Kelley Law (twice) and Kristy Lewis, Alberta’s Marcy Balderston and Cheryl Bernard, Saskatchewan’s Kay Montgomery, Manitoba’s Gerri Cooke and Jill Officer, Ontario’s Andrea Lawes and Jenn Hanna, New Brunswick’s Allison Farrell (Franey), Prince Edward Island’s Suzanne Birt (Gaudet), Nova Scotia’s Colleen Jones, Saskatchewan’s Amber Holland, Team Canada’s Jennifer Jones of Manitoba and last year’s winner, Kerry Galusha of the Territories.